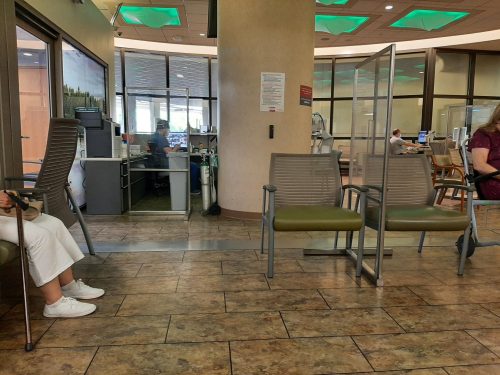 Uh oh, we all know what that is…

I took a walk with the “pups” through one of our fields today as I so often do. Mind you, the “pups” are 130 pounds each. We just have always called them that. Anyways on this walk that I have taken the pups on probably a hundred times or so before I chose today to be the day to find an unseen hole in the field. Said hole proved to be quite the hazard as I naturally shoved my foot in it and the result of that was an audible “pop”. That wasn’t good enough, however so I decided to stumble ahead approximately three strides and then firmly plant the other leg into the ground, creating quite the bit of road rash. While on the ground assessing my not so good situation, the pups came over and licked me profusely, which was a much better result than them running away. After I got my poop in group, I limped back to the homestead, observed my ankle swelling up to approximately the size of a baseball, and made the decision to head over to the ER.

We have heard many stories in the media about the crowded hosptials as of late with the resurgence of covid. I observed no such thing. I was admitted quickly, saw several doctors and received an x ray. The whole shebang cost me around two and a half hours, which is pretty standard for an emergency room visit. The X ray shows no breakage, which is a relief. It’s a sprain on the pretty severe side. The ER was amazingly quiet this day at UW Madison. I even managed a short nap in my room while I was waiting for radiology to get me the results of the x ray.

So the media in Madison at least can’t really yell and scream too much about the bodies piled up in the corridors due to covid.

For those interested, they promote “active recovery” with the ankle sprain. The doctor told me that they used to tell people with back problems to stay motionless as possible, but that the data show that you are supposed to do as much activity as you can as long as there is no pain and that this is the best way to heal. So I can sort of shuffle around pretty well (the ace bandage helps) but might have to wear a flip flop to work tomorrow. They estimate a two to four week recovery. Which stinks, but I’m glad there isn’t a break as I have a lot more running to do this year before the cold weather sets in.
‘