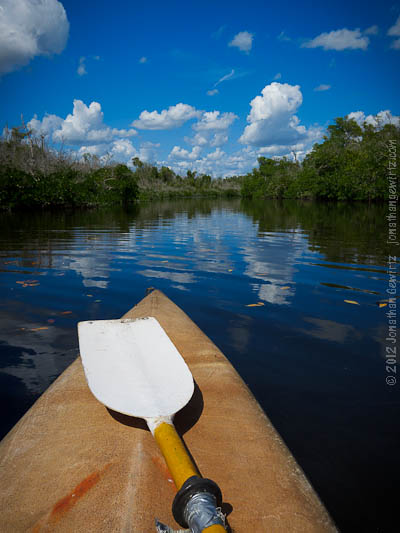 Many people canoe and kayak in the Florida Everglades’ extensive inland waterways, which are beautiful, full of interesting plants and animals and easily accessible. I couldn’t refuse an invitation to join friends for a day trip down the Turner River in the Big Cypress area. My friends arranged for me to borrow a kayak but its owner backed out of the trip at the last minute. Fortunately, the guy who organized the trip offered me the use of a kayak that he owns.

www.fun1001.com | Send this image to your friend

The “bug” of Y2K never quite measured up to the 1919 influenza bug in terms of devastating effect — but as TPM Barnett wrote in The Pentagon’s New Map:

Whether Y2K turned out to be nothing or a complete disaster was less important, research-wise, than the thinking we pursued as we tried to imagine – in advance – what a terrible shock to the system would do to the United States and the world in this day and age.

My own personal preoccupations during the run-up to Y2K had to do with cults, militias and terrorists — any one of which might have tried for a spectacle.

As it turned out, though, Al Qaida’s plan to set off a bomb at Los Angeles International Airport on New Year’s Eve, 1999 was foiled when Albert Ressam was arrested attempting to enter the US from Canada — so that aspect of what might have happened during the roll-over was essentially postponed until September 11, 2001. And the leaders of the Ugandan Movement for the Restoration of the Ten Commandments of God, acting on visionary instructions (allegedly) from the Virgin Mary, announced that the end of the world had been postponed from Dec 31 / Jan 1 till March 17 — at which point they burned 500 of their members to death in their locked church. So that apocalyptic possibility, too, was temporarily averted.

Don Beck of the National Values Center / The Spiral Dynamics Group, commented to me at one point in the run-up:

Y2K is like a lightening bolt: when it strikes and lights up the sky, we will see the contours of our social systems.

— and that quote from Beck, along with Barnett’s observation, pointed strongly to the fact that we don’t have anything remotely resembling a decent global map of interdependencies and vulnerabilities.

What we have instead is a PERT chart for this or that, Markov diagrams, social network maps, railroad maps and timetables… oodles and oodles of smaller pieces of the puzzle of past, present and future… each with its own symbol system and limited scope. Our mapping, in other words, is territorialized, siloed, and disconnected, while the world system which is integral to our being and survival is connected, indeed, seamlessly interwoven.

I’ve suggested before now that our mapping needs to pass across the Cartesian divide from the objective to the subjective, from materiel to morale, from the quantitative to the qualitative, and from rumors to wars. It also needs a uniform language or translation service, so that Jay Forrester system dynamic models can “talk” with PERT and Markov and the rest, Bucky Fuller‘s World Game included.

I suppose some of all this is ongoing, somewhere behind impenetrable curtains, but I wonder how much.

In the meantime, and working from open source materials, the only kind to which I have access – here are two data points we might have noted a litle earlier, if we had decent interdependency and vulnerability mapping:

Tom Barnett’s point about “the thinking we pursued as we tried to imagine – in advance – what a terrible shock to the system would do to the United States and the world in this day and age” still stands.

Y2K was what first alerted me to the significance of SCADAs.

Are we thinking yet?