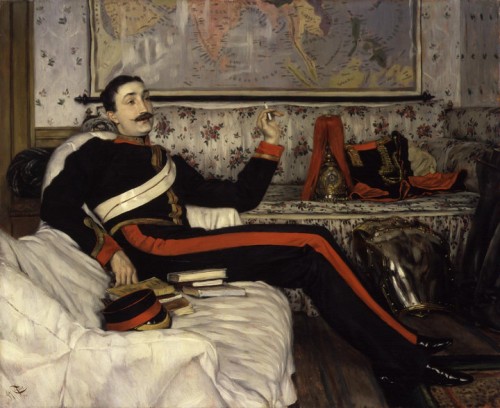 Col. Frederick Gustavus Burnaby, late of the Royal Horse Guards (the Blues), author of A Ride to Khiva: Travels and Adventures in Central Asia and On Horseback Through Asia Minor. He was also a pioneering aeronaut, author of A Ride Across the Channel: and Other Adventures in the Air. Col. Burnaby met his death in the hand-to-hand fighting of the Battle of Abu Klea, 1885. Queen Victoria fainted when she heard of his death.

Captain Frederick Augustus Burnaby of the Royal Horse Guards was no ordinary officer. For a start he was a man of prodigious strength and stature. Standing six-foot-four in his stockinged feet, weighing fifteen stone, and possessing a 47 inch chest, he was reputed to be the strongest man in the British Army. Indeed, it was even said that he could carry a small pony under his arm. … Nor was this son of a country parson entirely brawn. He also displayed a remarkable gift for languages, being fluent in at least seven, including Russian, Turkish and Arabic. Finally, he was born with an insatiable appetite for adventure which he combined with a vigorous and colourful prose style. Inevitably, these two latter qualities brought him into contact with Fleet Street, with the result that during his generous annual leaves he served abroad on several occasions as a special correspondent of The Times and other journals … .

From The Great Game: The Struggle for Empire in Central Asia

I am halfway through “A Ride to Khiva” and I am very grateful to Google Books, which provides full text, out-of-copyright books, at this point everything published before 1922. Through this wonderful service, I have been easily able to make the acquaintance of this extraordinary officer in his own prose, via Kindle.

One quote from the book. Burnaby is in St. Petersburg, and he sends a written request to the Russian Minister of War, Gen. Miliutin, asking his leave to travel across Russia and on to Khiva, which is (at that point) still beyond the Russian frontier. Miliutin responds in the negative, and offering as his explanation that he cannot answer for the security of travelers beyond the Tsar’s domains.

I should have much liked to have asked Gen. Miliutin one question, and to have heard his answer — not given solemnly as the Russian Chancellor makes his promises, but face to face, as a soldier — would he, when a captain, have turned his face homeward to St. Petersburg simply because he was told by a foreign government that it could not be responsible for his safety? I do not think so; and I have a far higher opinion of the Russian officers than to imagine that they would be deterred by such an argument if used to them under circumstances similar to those in which I found myself.