On Okinawa, after the fall of Shuri Castle, General Mushijima orders the Japanese troops to withdraw southward, towards the Oroku peninsula and the hills of Yaeju, Yuza and Mezado in the extreme south of the island. There are reports of discontent among the Japanese troops, something previously unheard of in the Imperial Army.

Elements of the US 1st Marine Division cross the Koruba river, south of Naha.

The forces of the US Army 24th Corps pursue the retreating Japanese while elements mop up around Shuri. 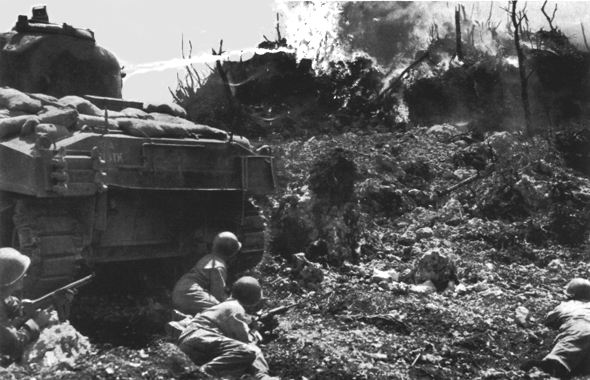 TANK-INFANTRY ATTACKS marked the battle for the escarpment. An armored flame thrower of the 713th Tank Battalion, protected by infantry against enemy satchel-charge attacks, sprays flame over a knob on the crest of the escarpment

Up until this point in the Central Pacific Theater of the Pacific War, the Japanese had only put up scattered 37mm anti-tank guns and 37mm armed Type 95 light light tanks against American M3 Stuart light tanks and M3 Grant and M4 Sherman Medium tanks.

These operations were small in terms of tanks used and taught US Army Central Pacific tank unit commanders some very bad habits in terms of operating without close infantry support. This became apparent with the veteran 193rd Tank Battalion supporting the 27th Division at Kakazu on 19 April 1945. The 193rd lost 22 of 30 tanks engaged along with it’s battalion commander.

There were reasons for this. The first place where the Japanese put in a integrated anti-tank gun based defense doctrine was Iwo Jima — A nearly pure Marine Corp landing operation. The second thing that stood out at both Iwo Jima and Okinawa was that the Japanese made a concerted effort to totally destroy knocked out tanks to prevent their recovery by American forces.

The duration of the operation at Iwo Jima was too short, and the operation too close to Okinawa, for the implications of USMC tank losses to be incorporated in the logistical planning for the US Army dominated 10th Army staff for Okinawa.

This is what the US Army Ordnance Department WW2 green book ON BEACHHEAD AND BATTLEFRONTsaid on the subject of that planning short fall:

Heavy Tank Losses
The tanks were having a hard enough time against the withering Japanese fire, especially fire from the 47-mm. antitank gun, which was accurate and deadly. The gun was small and easily concealed and its high muzzle velocity would send a projectile through any part of a medium tank except the glacis plate. At Kakazu on the morning of 19 April in the 27th Division’s sector, Company A of the 193d Tank Battalion lost four tanks from a single 47-mm. piece firing only sixteen shots and later in the day had many more cut down by artillery fire, some of them the scarce and
.
[462]
.
valued flame throwers. The company returned with only eight out of thirty tanks— the greatest loss suffered by American armor in any single engagement on Okinawa.24
.
Six of the tanks lost in this action at Kakazu were destroyed by satchel charges placed by Japanese suicide squads that seemed to spring out of the grass beside the tank, sometimes forcing turret lids open and throwing in grenades that killed the tankers. These squads of three to nine men did not cause as many tank casualties as the 47-mm. gun, but they continued to be a constant source of danger. Each man of the squad had his own job: one would blind the tank with smoke grenades, another would force it to button up by hurling fragmentation grenades, another would immobilize it with a mine under the track. The final act was destruction of the tank and crew by a satchel charge.25
.
Against such tactics, Tenth Army Ordnance in Hawaii had devised the backscratcher but just what it accomplished was hard to determine. Only a few were actually mounted on Army tanks, none on Marine tanks. In one case the device wounded rather than killed the attacker; in another, rain shorted the circuit so that the mine did not detonate. The few times the backscratcher appeared to be effective, friendly fire took equal credit for destroying the enemy.26
.
The test of the sanded paint applied to the tanks of the 713th Armored Flame Thrower Battalion for protection against magnetic mines was also inconclusive, for the battalion encountered no mines of this type.27 Antitank mines did, however, account for about 31 percent of all tank losses on Okinawa. Luckily there were few antipersonnel mines among them to interfere with tank recovery. The problem in bringing back the tanks was the lack of enough tank recovery vehicles to do an adequate job. Often after a tank was immobilized by a mine, satchel charge, or antitank projectile, or because it had simply thrown a track or bogged down in bad terrain, it was abandoned by its crew, and if not recovered by nightfall it would be demolished at leisure by the returning Japanese.28
.
By the end of May, the four Army tank battalions and the one armored flame thrower battalion had suffered 221 tank casualties, not counting Marine losses. Among the 221 tanks put out of action, 94 (including at least 12 of the irreplaceable flame throwers), or

43 percent, had been completely destroyed

. The effort by Tenth Army Ordnance to make up these losses was painfully unproductive. To begin with, losses on such a scale had not been anticipated. In the planning, a small reserve stock of 13 medium tanks was to be placed on Saipan for fast emergency shipment to Okinawa. These were sent for on 25 April. But even this small reserve had not been established on Saipan. The tanks had to be ordered from Oahu and did not arrive at Okinawa until 10 June—
.
[463]
.
some ten days before the campaign was virtually over. An additional shipment of 65 Shermans and 25 tank recovery vehicles was requested from Oahu on 28 April. They were shipped on 20 May and did not arrive until 15 July—almost two weeks after the campaign had been declared officially at an end.29
.
Because of the delay, all serviceable medium tanks were stripped from the 193d Tank Battalion (the unit crippled at Kakazu) and distributed to other tank battalions. By early May the tankers were asking for a tank heavier than the Sherman, with a weapon of higher muzzle velocity and thicker armor plate. The M26 Pershings seemed to be the answer. In mid-May (after V-E Day) twelve were requested from the United States, but they were not received until August. In the meantime, to provide better protection against the 47-mm. gun, the Ordnance tank maintenance companies welded steel track sections to the side sponsors, turret sides, and glacis plate of the Shermans, and also used armor plate from wrecked tanks to reinforce the sponson and shield the suspension system.30
.
In the end, however, the best defense for the Sherman turned out to be the infantrymen who accompanied it as part of the tank-infantry team, a truth forcibly brought home to commanders in the catastrophe at Kakazu where the tanks had been operating alone. In the early assault on the Shuri defenses, the Japanese, who knew the value of the infantryman, attempted to pin down the infantry with artillery and mortar fire, often successfully. But as the long bloody battle for Shuri dragged on through April and May, the Tenth Army commanders learned about cave warfare and how to win it. They directed artillery fire on cave entrances, forcing the Japanese gunners back into their tunnels; then infantry and tanks closed in, the infantry protecting the tanks from the suicide squads. Having gained a foothold, the troops could move down on cave openings from above, sealing them with flame or explosives, a method that General Buckner called “blowtorch and corkscrew.”31