On Okinawa, Japanese forces on the Oroku peninsula strongly resist the US 6th Marine Division which nonetheless captures most of the airfield.

In the south the forces of the US 24th Corps near the last Japanese defensive line, running from Yuza in the west to Guschichan on the east coast and based on the three hills, Yaeju, Yuza and Mezado. 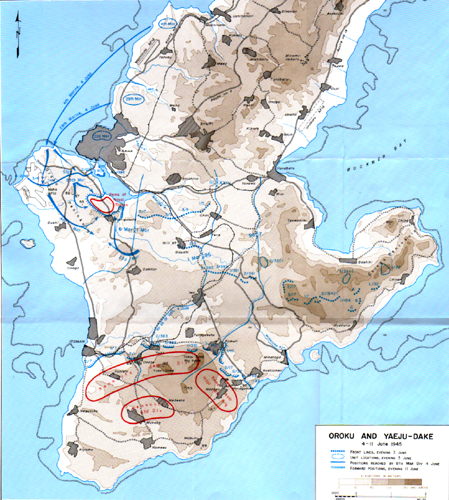 At sea, a sudden typhoon damages 4 battleships, 8 aircraft carriers, 7 cruisers, 14 destroyers, 2 tankers, and and ammunition transport ship, of the US 3rd Fleet.

On Okinawa, elements of the US 6th Marine Division advance in the Oruka Peninsula following their landing. Naha airfield is secured.

Elements of the US 96th Division (US 24th Corps) reach the lower slopes of Mount Yaeju and are halted by intensive Japanese fire.

The “Ritchie” T-6 through T-8 series pontoon flotation devices were one of those “could have been” technical marvels of the Western Allies that never quite came off because the Japanese surrendered first.

The US Army Ordnance department developed these kits to make the M4 Sherman medium tank (T-6 type, standardized later as the M19), M24 Chaffee light tank, M18 Hellcat Tank Destroyer (both T-7, later standardized for the M24 as the M20), and M26 Pershing heavy tanks (T-8, canceled in prototype stage in 1946) into amphibious fighting vehicles. It did this by adding ridged, compartment-ed, foam filled floats to the front back, and for the M4 & M26, the sides of the tanks. This made the floats resistant to flooding due to small arms fire damage and the tanks were free to fire their main guns. The kit equipped vehicles were propelled through the water by cup like end pin connectors on their tracks that pulled them forward through the water. The front and rear floats could be blown off by exploding bolts on the landing beach. This made these tank-kits very sea worthy and at Okinawa one LST dropped several Marine T-6 equipped tanks 10 miles off shore at Okinawa and they made it to the beach!

There were several significant down sides to the Ritche kits. First, it took 20,000 man hours per tank to properly water proof the tanks involved, place fording kits, install the floats, add bilge pumps, and then install the track swimming cups. Second, the swimming cups left no “reverse gear” in case the tank had to change course. Third, the float’s exploding bolts threw two inch bolts several hundred yards and required drivers to carefully blow the front floats, back up, blow the rear floats, and then maneuver around the floats afterwards. Finally, the front float was so long that it would hang up on a beach or reef that rose too quickly.

The T-6 was demonstrated to General Patton before D-Day, but General Eisenhower’s staff decided in May 1944 in favor of the canvas sided duplex drive “DD-tanks” because the ridged floats on an M4 weighed 15 tons and increased the length of the tank such that two DD-tanks could be shipped for one T-6 equipped Sherman. The results of that decision spoke for themselves on 06 June 1944.

There were several reasons for this including the fact that second generation Shermans, particularly the M4A3 marks, had grown too heavy for LCM family of landing craft.

The US Army’s 711th Btn tanks were launched from LSMs 500 yards from the beach as part of the 7th Infantry Division’s assault wave. They hit the beach with no problems and were observed in action by naval historian Adm Samuel Elliot Morrison and they were mentioned briefly in the last book of his WW2 Naval history series.

The 1st Marines tanks, as mentioned earlier, were dropped an hour later into the water 10 miles off shore and took five hours to get to the reef off the beach. In the course of their landing, these tanks found most of the problems of the Ritche device. Along the way one of the 1st Marine’s tanks managed to ram a US Navy Destroyer because the tank could not turn fast enough or reverse, and the Destroyer refused to change course. When they reached the beach, they had to be winched over the reef by a bulldozer because the front of the pontoons fouled the steep angle of the reef. When finally on the beach, they ran out of fuel!

At the end of the war in August 1945, there were 500 T-6 kits for M4 Shermans, 250 kits each for the M18 Hellcat and M24 Chaffee. They would undoubtedly have been used during Operation Olympic and provided the Japanese defenders of Kyushu a huge tactical surprise as M4 Shermans crawled out of the surf before the first assault wave of infantry carrying LVTs made it to shore.

The M26’s T-8 float device was not ready for Operation Olympic, but might have been for Operation Coronet in 1946 at accelerated war time development and production rates.

This is what I found on the history of the T-8 Device for the M26 Pershing:

Armored division as an assault landing force
The Armored School.
May 1952.

Rigid Flotation Devices. A more rugged type of flotation device for the M4 medium tank, known as the T-6 was employed experimentally by Marine and Army tank units during the Okinawa landing.

…The T-6 consists essentially of six steel pontoons; one pontoon on each side of the tank, one on the bow, one on the rear, with bow extension and rear extension pontoons which hinge upward for more compact stowage prior to launching. The six pontoons are compartment-ed by sheet steel partitions into many sub-compartments; Sub-compartments are filled with plastic foam-to further ensure buoyancy should the pontoons’ become punctured.T-6 floated tanks are seaworthy, having been successfully tested in twelve foot waves. The floated tank is forty three feet long and therefore provides a fairly stable gun platform, enabling a tank gunner employing the gyro-stabilizer to deliver accurate fire during the beach approach.

Compared with LVT(A)ts (amphibious tanks), the floated tank constitutes a more stable gun platform; the higher velocity and greater accuracy of the stabilized tank gun in comparison with the LVT(A) howitzer and the tank’s heavier armor, are important advantages. Pontoons are jettisonable form inside the tank on reaching the beach. Pontoons are remountable and can be reused.T-6 devices, as used on Okinawa, generally provided adequate flotation but needed further development to improve steering, to increase speed above the 4.2 knots obtained by the tank tracks revolving in the water, and to provide a reverse…

Little modification has been made on this device. It is now called the M-19 Flotation Device by the Army. Some of the disadvantages are readily apparent in the specifications: Its length is 47 feet 8 inches, width 11 feet, and height 11 feet 8 inches (including exhaust and intake stack of water proofIng kit) when prepared for launching. The front and rear out-boards can be folded upward to for loading, reducing the length to 33 feet 7 inches and increasing the height only two inches.

The weight of the flotation device is approximately 16 tons. No improvement has been made in manner of propulsion and the speed remains about five miles per hour in water.4 The same principle was employed in the development of the T8 swimming device for the M-26 Tank, This model could probably be adapted very easily for use on the M-46 or M-47 tank. To compensate for the weight of the M-26 tank it was necessary to increase the length of the device to 65 feet and the width to 14 feet. The weight of the device itself is 34,000 pounds.5 Since this is the latest equipment built along this line the following extracts from the development report gives a good picture of its capabilities and limitations.

DESCRIPTION:….The Device, T8 provides the means for floating the Medium Tank, M26 as a self-propelled unit. It consists of metal floats in four jettisonable assemblies with propulsion furnished by the vehicle tracks; steering is accomplished with two rudders.

…The rudders are manually operated by a crank handle in the driver’s compartment which connect to the rudders by chain and cable. The vehicle is equipped with a standard fording kit…

PURPOSE :
To provide flotation equipment which will permit the Medium Tank, N26 to negotiate, under its own power, deep rivers and expanses of ocean.

HISTORY:
The first test of the equipment was made at APG (Aberdeen Proving Ground,) 25 April 1946,..(The size and weight of the device poses a problem in logistics. Assembly under field conditions would be a major problem. It was recommended..

“No further development work should be carried on with floating devices of this type for the Medium Tank M26, or other vehicles of equal or greater weight except as an expedient 5…

The rear extension and the width of the device make launching from the landing Ships impossible. They can only be launched from a ship of the LSD type which actually floats the tank inside the ship allowing it to move out under its own power.The poor speed and maneuverability in water of tanks equipped with this device might possibly be improved with the installation of removable propellers geared to each rear track idler.

This would enable the driver to speed up or slow down either propeller by use of the normal tank steering as is done with all water craft having two propellers.

Here are some more places I have found the history of the Ritchie kits:

http://warriorsaga.com/ This site is the story of Ordnance Sgt and later Captain Floyd Coleman who was on the Ordnance demonstration team for the T-6 Device.