The fighting on Okinawa saw many M4 Sherman tanks destroyed by the improved Japanese anti-tank defense build around the 47mm Type 01 anti-tank gun. Mid-May 1945 the US Army Ordnance branch took upon itself the task to send 12 of the Sherman’s successor tank, the M26 Pershing, to Okinawa. In my previous post on the priority shipments to Okinawa spoke of a LCT convoy from Okinawa to Hawaii to pick up M26 Pershings on Hawaii.

That story was wrong.

I found several references after that post including Kenneth Estes’ MARINES UNDER ARMOR: The Marine Corps ans Armored fighting Vehicles, 1916-2000 that had dates of Pershing Delivery varying from 21 July to 31 July 1945. It turns the 31 July 1945 date is correct and the landing craft tank (LCT) I mentioned were at Okinawa the whole time, not in a round trip convoy to Hawaii.

The following story of the shipment of 12 Pershings to Okinawa is from PERSHING: A History of the Medium Tank T20 Series by R.P. Hunnicutt:

Mid May 1945 — A Ordnance “Mission” similar to the “Zebra Mission” sent to Europe with the M26 Pershing was organized by Brig. Gen Borden, Chief of the New Developments Division, Wash. D.C. Twelve M26 Pershings were to be delivered to Naha, Okinawa with tools, maintenance crews, spare parts and other equipment. 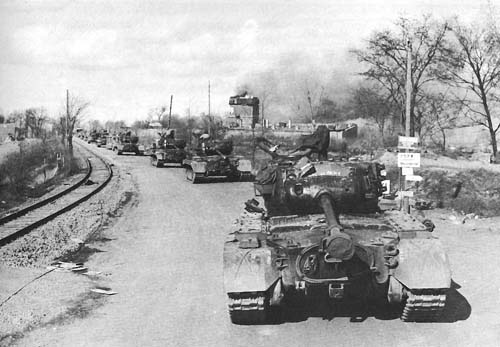 A column of Pershing tanks from the Zebra Mission, March-May 1945, in Germany.

24 May 1945 — Previous Ordnance mission veterans Captain’s Gray and Taus arrive at the port of Seattle, Washington with 12 Pershings and organized the provisioning of spare engines and transmissions plus other equipment from two Pershings at the Richmond Tank Depot.

21 July 1945 — The Pershing mission arrives at Naha and hits a final delay. The LCT-5 landing craft cannot carry a M26 Pershing. It is too wide. So LCT-6 landing craft have to be obtained. This delays landing of Pershings.

30 July 1945 — The S.S. Sherwood finally lands two of the 12 M26 Pershings. The two more are landed the next day, then the SS Sherwood must leave the area due to a Typhoon that wrecks much of Okinawa.

4 August 1945 — The SS Sherwood returns to Naha and finally delivers the last eight Pershings. Training begins with the 193td and 711th Tank Battalions and the 81st and 293rd Heavy Maintenance Battalions.

10 August 1945 — After the first class with the above units is conducted, further training is halted and the Ordnance mission is placed on stand by as the 10th Army is being alerted for the “Operation Black List” Japanese occupation landings.

15 August 1945 — V-J Day arrives and the Pershing mission is canceled.

This M26 tank is fighting in Korea near the Naktong River

In addition to looking for the above, I spent some time tracking down what formations were going to have Pershings for the Operation Downfall landings on Kyushu and Honshu now have a good idea what formations the M26 would be located:

2) DOWNFALL — The End of The Imperial Japanese Empire, by Richard Frank, Page 398, said 125 Pershings shipped from the USA would be issued as follows:

The 706th Tank Battalion was on Luzon and had supported the 77th Infantry Division on Okinawa. If that relationship held for Operation Olympic, that would put the 706th on the beaches of Kaiman-Dake with the IX (9th) Corps on X+3 (4 Nov 1945).

The 767th Tank Battalion was on Hawaii and was slated to land with the 98th Infantry Division, which was also part of IX Corps as it’s reserve. However, the 98th ID was also tasked to be the contingency reserve to support any landing beach so it could have arrived as reinforcements to the US Army I (1st) Corps at the beaches of Miyazaki, the US Army VI (11th) Corps at the beaches of Shibushi in the Ariake Wan, or with the USMC V (5th) Amphibious Corps on the beaches near Kushikino.

Details like this are important for a couple of reasons.

First, the M26 Pershing was invulnerable on the front hull and front turret to the Japanese 47mm type 01 anti tank gun and the gun had to be at 100 meters or closer for the armor piercing shell to have a chance at either turret side or hull sides forward of the engine compartment.

Second, the Japanese were about to introduce their own technological surprise for Operation Downfall — Japanese version of the Bazooka.

While the Type 4 70mm rocket launcher could not penetrate the front or sides of a Pershing at any range and had to hit in the rear engine compartment or tracks to be able to do any damage to a Pershing. It could penetrate the side and rear of the of the Sherman’s turret or hull as well as any portion of the heavy 155mm, 8-inch (203mm) and 240mm self-propelled guns the US Army was going to land to crack Japanese fortifications.

For the “Cave processing” tactics that the USMC developed on Okinawa to work in Kyushu for the American landing forces. They needed a tank that had the armor to survive close-in to Japanese Type 4 hunter-killer teams.

The Pershing would be that tank.

I checked Shelby Stanton’s “WORLD WAR II ORDER OF BATTLE” for the US Army last night and found that the 77th Infantry Division was in Cebu and not Luzon in the Philippines.

This implies to me that the Pershing armed 706th Tank Battalion would be landing with either or both the I Corp or IX Corps on Operation Olympic’s X-day, since the four US Army assault divisions in the first wave of the landings were staging from Luzon.