Let’s take a closer look at the United States of Islam video which I mentioned in my post Of Weaponry and Flags. 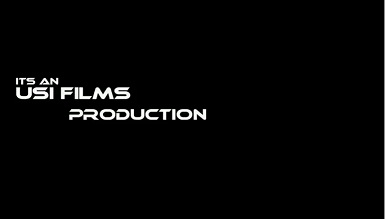 The video announces itself as “an USI Films production”. It then opens with the words “since 911 the world has changed” in white type against black, followed immediately by news clips of the WTC attacks and of President Bush describing them as “evil acts” and declaring “I have directed the full resources of our intelligence and law enforcement communities to find those responsible, and to bring them to justice.”

What we shall be seeing, then, is a time-oriented video, presenting a historical context for the present moment with implications for the near future.

From here we cut by way of another white on black typed message — “they started this war in afghanistan” – via clips of war footage to another – “but their agenda is much bigger and brutal than that” – and then to another clip of Pres. Bush: “Our war on terror begins with al-Qaida but it does not end there. It will not end until every terrorist group of global reach has been found, stopped, and defeated.”

By this point, the background music, which is taken (for reasons both political and musical?) from Vangelis’ 1492 – Conquest of Paradise soundtrack, is swelling. A global map appears, showing much of north Africa, the middle east, Indonesia and Malaysia in green, with Pres. Bush in voice over speaking of the establishment of “a violent political utopia across the middle east which they call a Caliphate where all will be ruled according to their hateful ideology.” 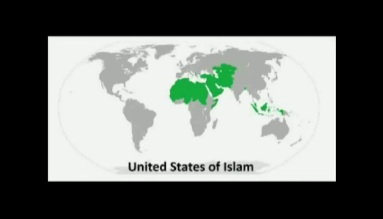 The map is titled United States of Islam.

The words “they have done this before” are then followed by a series of film clips showing “the fall of the Khilafa 1828 -1924” and maps showing the slow spread of the British and French flags across north Africa and the middle east, with glimpses of Lawrence of Arabia, the Balfour declaration, and General Allenby, accompanied by the voice-over of someone I’d tentatively identify as Sheikh Imran Nazar Hosein, declaring: 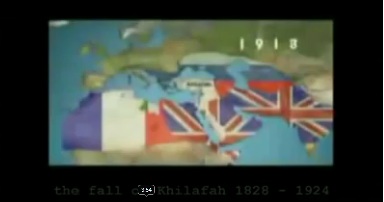 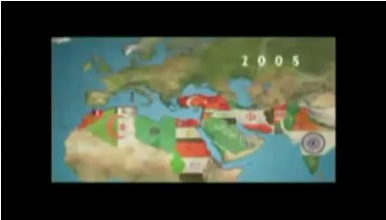 ending up in 2006. And what do we want now? You might be forgiven if you haven’t already guessed: 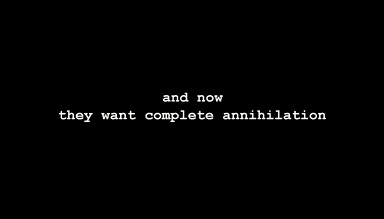 Clips then show the toppling of Saddam’s statue in Baghdad, the Israeli army in Gaza with casualties, the October 2009 Pishin attack on the Revolutionary Guard in Iran (which was claimed by Jundullah), and a first mention of the Christmas bomber, Al Qaida and Yemen… a quick mention of Nigeria and Somalia… and “Pakistan from which they fear the most”.

A newscaster from, presumably, Pakistan intones “this is called the fourth generation warfare.”

That essentially brings us up to the present moment.

We have arrived at the half way point in the 10 minute video and seen the global historical context, laid out in maps and flags. We have focused in on the present from a two-hundred year sweep, and on Pakistan from the distributed ummah.

What follows will expound and expand on this present moment, bringing Afghanistan into the picture alongside Pakistan, emphasizing the spiritual significance of Khorasan, and taking the battle variously to India and Jerusalem…

2 thoughts on “United States of Islam video: I”