Two weeks ago, I posted a pessimistic piece about Egypt post Mubarak. Now, Austin Bay has posted a pretty optimistic piece that may be better informed than mine. I hope so.

My fear was stated here:

“One of the most publicized figures outside Egypt in this story the last few weeks is a Google executive who is Egyptian.

One of the western media’s favorite Egyptian rebels is Google executive Wael Ghonim. No surprise there: if you had to choose among radical clerics like al-Qaradawi, hooligans like those who assaulted Lara Logan, and a suave, Westernized Google exec, whom would you want to interview? Ghonim was present on Friday and intended to address the crowd, but he was barred from the platform by al-Qaradawi’s security. He left the stage in distress, “his face hidden by an Egyptian flag.” Is Ghonim Egypt’s Kerensky? Well, at least Kerensky got to rule for a while.”

I went on to say:

Ghonim is one more proof, as if we needed any more, that brilliance in another field is no guarantee of common sense in politics, especially revolutionary politics. We are now about to move to the next stage, which in the French Revolution ended with the Terror. In Iran, it still goes on.

Austin Bay has the advantage of two more weeks of observation of the rapidly evolving situation. He quotes Haaretz, a rather left wing Israeli newspaper that is more hopeful. Hope is not a policy but Israelis are far more interested in the situation in Egypt than we are. They have to be as they share a border.

The revolution in Egypt is far from over. The popular uprising may have succeeded in ousting president Hosni Mubarak and most of his top associates, but the young people who led the protests at Tahrir Square are certainly not resting on their laurels.

Tens of thousands returned to the square on Friday, this time demanding to shut down the internal security authority, Amn al-Dawla. By yesterday, dozens of young people had already taken over the headquarters of the organization, notorious for terrorizing Egyptian citizens under Mubarak’s rule. The takeover was prompted by fears that organization officials were destroying evidence of their involvement in torture and other human rights violations.

This may be good news but I keep going back to the French Revolution, which set the standards for all revolutions to come.

Until the election, both Israeli and international observers agree Mohamed Hussein Tantawi, chairman of the Supreme Council of the Armed Forces, remains the key authority in Cairo. The mission facing Tantawi and his generals is to take Egypt safely through a transition period that will culminate with the establishment of civilian and democratic rule. The army is maneuvering between the establishment it knows well and the street, a new and not yet entirely familiar player.

The Army is the best hope for Egypt, as it has been for Turkey. A key factor in our failure to do better in Afghanistan is the fact that a crude and stupid Congressional reaction to the news that Pakistan had a nuclear bomb was to cut off all contact between Pakistan’s army and ours. That was nearly fatal as there are few ties between Pakistani officers and the US army, which are usually established as junior officers. These contacts were abolished by a Congress that knows little about foreign relations, especially those not published in the New York Times.

If we finally have to leave Afghanistan under unsatisfactory conditions, much of the failure should be attributed to Congress and its crude attempts to manage US policy it knows little about.

The following is good news, if true.

The Muslim Brotherhood, meanwhile, is seen as the opposition body most prepared for a general election, but the chances it will seize power are seen by Egyptians as slim. Most observers believe that the Brotherhood will assume a similar position to the ultra-Orthodox parties in Israel, influencing the government but not leading it.

Just keep remembering that the Kerensky government thought it had the Bolsheviks under control in 1917. Bay is still optimistic for another unusual reason.

The article argues that “the real power belongs to the young people [in Egypt] who managed to change political reality.” Media in Israel are missing “the generational shift taking place in Egypt and perhaps the entire Arab world.”

Sex, drugs, and rock and roll– now that’s a universal language. Al Qaeda doesn’t rock and roll. A burka is not sexy. On the twitter-connected Arab street, these may be Al Qaeda’s fatal social flaws. I don’t know what Al Qaeda’s drug policy is (probably pro-hashish), but I know its alcohol policy. Hence one of the most important socio-cultural quips of the first decade of the 21st century: “Democracy, whiskey, sexy.”

But once again back to Haaretz, this time on the Muslim Brotherhood. Yes, it will be a factor but “the chances it will seize power are seen by Egyptians as slim. Most observers believe that the Brotherhood will assume a similar position to the ultra-Orthodox parties in Israel, influencing the government but not leading it.” Interesting analogy. Remember, the Muslim Brotherhood in Egypt is factionalized — but so are ultra-Orthodox Israeli parties.

We will see. I hope he is right. Unfortunately, Turkey is slipping into Islamist hands as the AKP party continues to arrest army officers on phony charges. 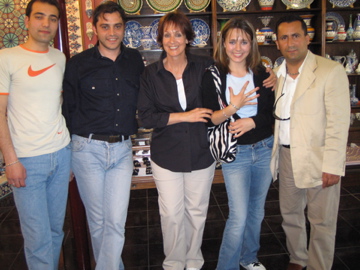 Here are Annie and her mother in an Istanbul restaurant. Everybody spoke English and were more than courteous.

I have tried to explain to my daughter Annie how the friendly Turks, who did so much to make her visit to Istanbul pleasant, want to arrest large numbers of Army officers, like the one who gave her a tour of the Scutari Barracks, a major Army headquarters. 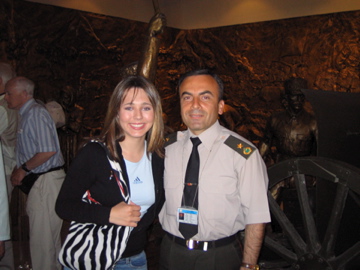 This officer is a major, spoke English perfectly and gave her a tour.

I guess I will have to do a post on the history of Turkey for her. She certainly wouldn’t learn anything about it in college. She was 14 when those photos were taken. I wonder if the Turks would be as friendly now. I suspect they are because we were in Istanbul, the westernized and secular part of Turkey.

I hope Egypt will learn a lesson from Ataturk, who is still revered in Turkey, at least modern Turkey.

UPDATE: I am not at all surprised by this. If Gadafi can hold out in Tripoli, I could see Egypt carve off the eastern section as it has the largest Libyan oil fields and the lowest population. The Libyans might choose to be Egyptians if necessary.

3 thoughts on “Maybe I was hasty about Egypt”