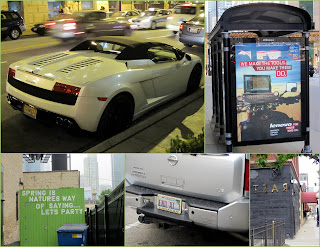 Upper left – a car that should definitely not be on the street – a Lamborghini parked right out on the street on a busy Friday night in River North. Upper right – all I could think of when I saw that ridiculous photo of a laptop strapped to the handlebars of a motorcycle was “Get a damn iPhone or a Garmin”. Really… that is plain crazy and in a nutshell explains how having the most up to date laptop has gone from a must-have to an I’ll-wait-a-while type of purchase. Lower left – can’t argue with that sentiment about spring, but funny that it is on a trash bin door. Lower middle – great license plate on a truck in front of the post office. Too true and it should say retire at 50 but that probably won’t fit on the plate. Tzar bar – popped up in my neighborhood on Ontario and funny that the name of what was essentially the Emperor of Russia is now a trendy name for a nightclub. Pictures here looks like a fun and expensive place to visit if you are under 30 and can burn a few hundred bucks / night and stay out until daylight.