I recently traveled to Norway and as a minor military historian was fascinated by their historical entanglement with Germany. I was not able to travel to see the coastal fortifications in the Northern part of the country that I wrote about here.

Balestrand is a beautiful little community along a large fjord (Sogenfjord)in Norway. While we were there I stayed at the Hotel Kviknes, which has a long tradition as a fine tourist hotel. 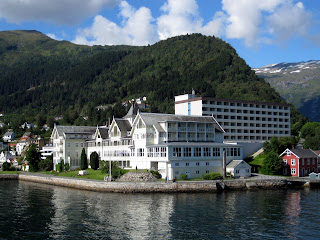 The Kaiser brought a portion of his fleet up the fjord with him while he visited Norway as a tourist. I saw a photo from a local guide but I can’t seem to find one on the internet. He had a touring vessel and it looked like a couple of light cruisers but am not certain. 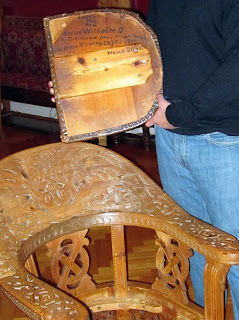 This is the chair in the Hotel Kviknes where the Kaiser supposedly sat when WW1 was declared. There was a young couple having a drink at the table and they were nice enough to let me get a photo of the bottom of the chair which was marked accordingly.

Stalheim Hotel and the Kaiser

The Stalheim Hotel is one of the most famous hotels in Norway, known for its fabulous views as you can see below. 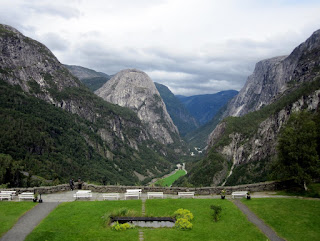 Kaiser Wilhelm II was the Emperor of Germany at the start of WW1. For twenty years in a row the Kaiser visited this hotel in Norway during the summer. Below is a monument to the Kaiser, which apparently is misspelled (per the manager of the hotel, who gave us an excellent historical tour). 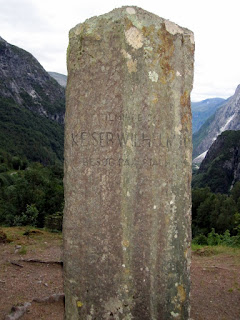 This is a view of the Stalheim hotel today, which has been substantially rebuilt since the world war I era. 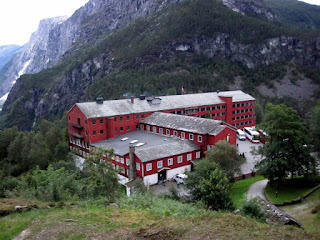 The Germans attacked Norway in 1940. Here is a solid summary of the campaign at wikipedia. Per wikipedia the German soldiers had orders not to shoot unless fired upon; apparently they hoped that the citizens in Norway (and Denmark) would view them favorably. This likely factored in with their racial politics, and the long history that Norway and Germany shared. 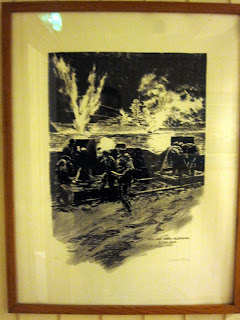 But the Norwegians did resist. While they were ultimately defeated (and caught mostly unawares by the invasion) they had a major victory with the destruction of the Blucher, a heavy cruiser with 8″ guns which was damaged by shore batteries and then sunk by land based torpedoes. At that engagement they also damaged the pocket battleship Lutzow, which had to reverse away full speed from the guns. This is a photo of a print on the wall in the Hotel Kviknes. 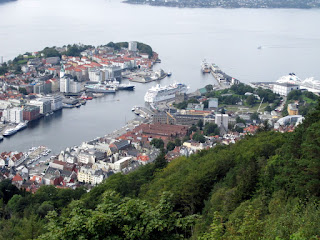 You can get a fantastic overhead view of Bergen if you take a cable car called the Fliobanen. I went up there looking for evidence of the German u boat pens that were constructed in Norway (and to have a beer and be a regular tourist, too). Apparently there are some remnants (it is damn hard to get rid of the immensely strong concrete structure) used by the Norwegian navy today but I wasn’t able to find them. 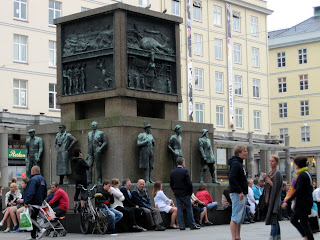 The Norwegian merchant marine made very large contributions to the Allied war effort. After the fall of Norway in 1940 their ships sailed with the Allies under the name “Nortraship“. One side of the “Sailor’s Monument” in Bergen contains an engraving of a merchant ship with sailors drowned in the cold sea.

After Bergen fell quickly to the Germans the Norwegian army regrouped (and were receiving British and French help to the north) and made a stand at Voss. We visited there (it is a quick train ride from Bergen) and when I inquired about history the guide said that Voss was blasted by the Germans and ruined because the men made a stand there. Today it is very attractive and you can take a cable car up to the ski resort atop the mountain. 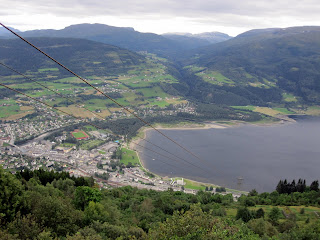 When researching the war effort there are many references to the resistance against the German occupiers. The famous “heavy water raid” in 1943 which was rated as “the most successful sabotage effort in WW2”. There were many other books about individuals who resisted and / or escaped over the border to Sweden.

Due to the high amount of German soldiers present in Norway any acts of concerted resistance would have been suicide. I am not aware of a “standard” for occupation but in terms of soldiers as a percent of citizens Norway has to rank near the top of the list. There were hundreds of thousands of German military personnel in Norway at various points of campaigns with under 4 million inhabitants, a ratio that made serious resistance efforts impossible.

The biggest contribution that Norway made to the Allied cause, in my opinion, was the fact that the German navy was seriously degraded upon completion of the Norway campaign. Per wikipedia

At sea the invasion proved a significant setback. For the Kriegsmarine the campaign led to crippling losses, leaving the Kriegsmarine with a surface force of one heavy cruiser, two light cruisers and four destroyers operational. This left the navy weakened during the summer months when Hitler was pursuing plans for an invasion of Britain.

15 thoughts on “Norway and Germany”