Recently I wrote about my excitement (not kidding) at getting a local Wal-Mart in the River North neighborhood. However, this is not the type of advertising I think they were looking for… a photo in an article about recent overnight shootings shows off their logo next to police cruisers and police tape by a crime scene along with their store here.

I was coming up the escalator on the “L” when I saw these two buttons on the back of some student’s backpack. I wonder what the correlation between having only buttons of Che Guevara and Leon Trotsky on your personal effects and the likelihood of you defaulting on your student loans? Probably pretty damn near 100%. Here is a crazy link – the head of the US anti-drug authority is Trotsky’s great-grand daughter, Nora Volkow. They had an interview with her on “60 minutes” and it was very interesting and highly recommended. 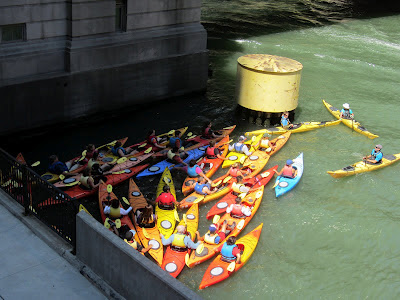 What is the official term for a group of kayakers? A gaggle? 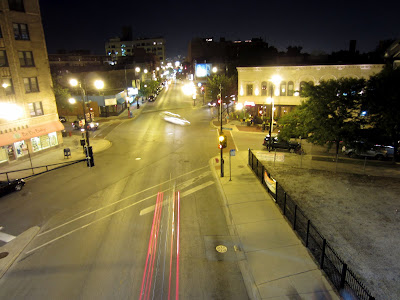 A view of the Roscoe Village neighborhood from the Paulina “L” platform looking south. It was a beautiful night. The empty lot on the right side of the photo used to be a “Just Tires”. A very close family member went there once with a flat tire and the guy working there said it was nothing and just put air in the tire and sent her on her way. Later when the tire went flat again she went to a “real” service and they found a big nail in the tire. This is especially funny because if their business is “just tires” then they aren’t very good at it. Probably correlated with why they are just an empty field today. 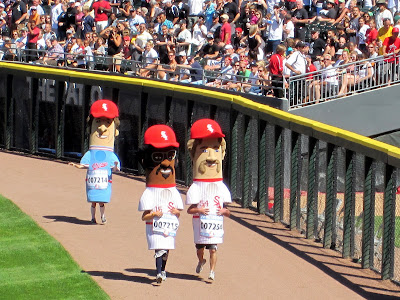 At the White Sox game they celebrated 30 years ago with a race between mascots representing the 1972 Dick Allen, Goose Gossage, and Reggie Jackson. It has been a great year for the White Sox, especially considering that they entered the season with such low expectations. 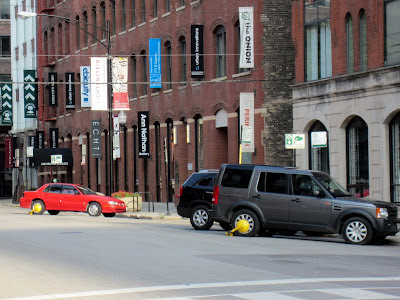 It is good to know that while Chicago is being gripped by its usual wave of summer shootings that the police focus on the highest priority items. Walking out in River North one Sunday morning you can see all the cars that have been booted the night before and left behind by club-goers at 4am.

7 thoughts on “Around Chicago September 2012”