UPDATE #5 Patterico has another story. The man who lost both legs and was shown in a graphic photo linked at Patterico, saw the bomber drop the backpack and look him in the eyes. A few minutes later, the bomb went of and blew off both legs of the witness.

UPDATE #4 Here is another photo of the white hat suspect taken by a runner who had finished the marathon and who heard the blast of the bombs. The photo was taken AFTER the bombs went off. Does this fellow have a backpack ? I can’t see it. 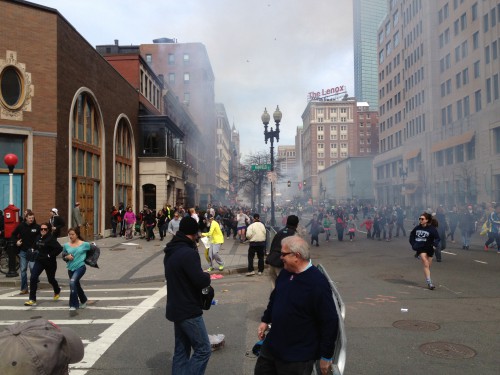 The NY Times has enlargements but has blocked uploads of them. He is walking by the corner of the building to the left of the photo. The man who took it has turned it over to the FBI. 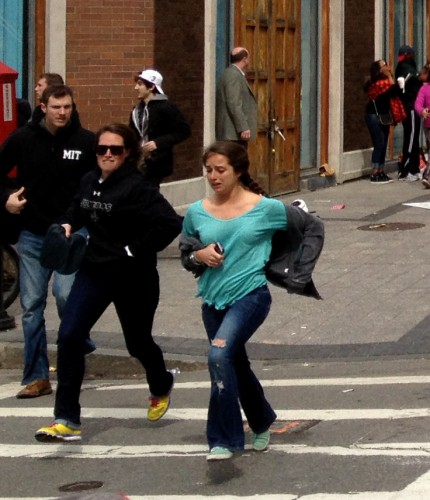 Here is an enlargement I made and I don’t see the backpack. This is the suspect the FBI says dropped his backpack by the Forum Restaurant, the site of bomb #2.

UPDATE #3: Here are the FBI website photos of suspects. These photos are not the same as shown on the NY Post’s front page or on other sites. 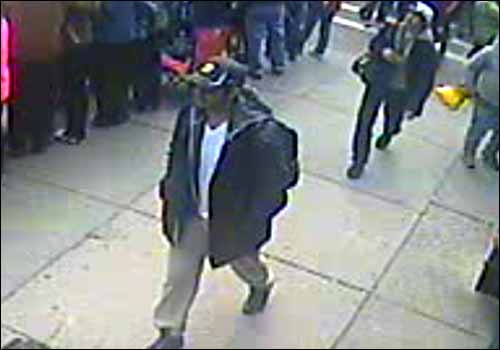 Here is one I’ll call “black hat.” The other, called “white hat” is behind him. 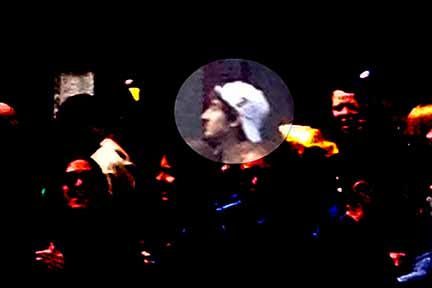 And the other, “white hat” , is shown in close up. He fits a description of a guy with a hat on backwards and I have not seen his photo elsewhere. Neither is more than “a person of interest.”

Note that the other sites linked to below have deleted photos or changed to the above photos which now seem to be official.

UPDATE #2: A suspect is now being sought based on the video which shows him dropping off a backpack at the site of the second bomb. He was then seen leaving the area.

UPDATE: Aside from all the confusion by the media, there does seem to be video footage of suspects. In stills linked by Grurray below, two appear possibly middle eastern but it is way too early to say anything more.

The Boston Marathon bombs have focused attention on a subject not popular with this administration. It would really be inconvenient if it was an act of an Islamic extremist, even a homegrown one. The bombs appear now to be based on black powder placed in metal pressure cookers which were also filled with shrapnel-like objects such as nails and ball bearings. 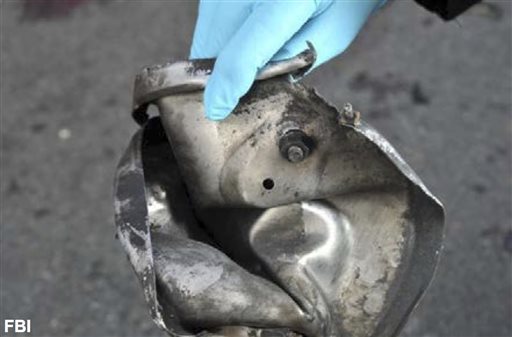 This photo shows the remains of a blasted pressure cooker found at the scene.

These are not like the bombs used in the 2005 London bombings, which used organic peroxides, described by an alleged “terrorism expert” on CNN as “hydrogen peroxide.”

The London bombings were also suicide bombings and were followed by public claims of responsibility including video taped statements by the bombers made before the event. The Boston bombing did have some similarities in that backpacks were used and the bombs were placed to inflict maximum civilian casualties.

Pressure cookers were used as the containers and are well known for this use.

“A technique commonly taught in Afghan terrorist training camps is the use/conversion of pressure cookers into [improvised explosive devices],” the bulletin warned.

That [DHS] bulletin cited several plots from 2002 to 2004 to use pressure-cooker bombs in France, India and Nepal. But more recently there have been at least three other instances of would-be terrorists in the West, all of them Islamic radicals, in possession of pressure cookers for reasons that seemed not to involve having friends over for dinner.

So far they have been Islamic radicals.

One was an Army private linked to the 2009 Fort Hood shooter Nidal Hasan, who had reportedly been taking bombmaking tips from al-Qaeda’s short-lived (literally) online magazine Inspire and had various weapons and explosives along with his cooking pot. (The magazine reportedly recommended pressure cookers as explosive devices.) A 2010 suicide bomber in Stockholm had rigged a pressure-cooker bomb that failed to detonate. And as a newer DHS warning about the kitchen devices noted, the failed 2010 SUV bomb in New York’s Times Square was a pressure-cooker device containing 120 firecrackers. The same DHS memo refers to a March 2010 bombing with a pressure cooker at a Western Christian aid agency in Pakistan that killed six people.

Certainly the army private associated with Hassan is a home grown terrorist, as was Hassan himself. Although described by the Obama folks as “workplace violence,” the Fort Hood shootings were a domestic terror incident.

What are other possibilities ? The news media seems focused on “white right wingers.” The effort to divert attention to the left’s enemies is pitiful but not surprising.

However, white male privilege means white men are not collectively denigrated/targeted for those shootings — even though most come at the hands of white dudes.

Likewise, in the context of terrorist attacks, such privilege means white non-Islamic terrorists are typically portrayed not as representative of whole groups or ideologies, but as “lone wolf” threats to be dealt with as isolated law enforcement matters.

The fact that there is a world-wide Islamic movement that uses terrorism and bombs might be a useful information if this writer were not so determined to deflect attention from it.

The Long Island Railroad shooting in 1993 was inconveniently committed by a black man but that fact has disappeared from the conversation about “gun violence” just as has the horrendous carnage in Chicago, all committed by young black men, been ignored. The fact that Ferguson, the LIRR shooter had racism as a motive has also disappeared. Notes in his pocket explained his reasons.

One of the notes referred to “racism by Caucasians and Uncle Tom Negroes”.

Timothy McVeigh was a “lone wolf” with the exception of his partner Terry Nichols and his motivation was the government misbehavior at Waco. For this reason he attacked a government building, even the one where offices used by federal officials linked to Waco were located.

The carnage created by the Boston bombs is a bit unusual as the effects seem to have been maximal near the ground. I have taken a counter-terrorism course and the course emphasized that shooting incidents can best be dealt with by lying flat on the ground as bullets tend to ricochet upward. Bombs and grenade incidents should be avoided by crouching behind some shelter as the shrapnel tends to fly parallel to the ground. Lying flat is less effective in avoiding injury. Early reports note a large number of leg amputations and some graphic photos from the scene emphasize this.

The source of this act is not yet clear and it may take a while unless the perpetrator makes a mistake like Timothy McVeigh made with his missing license plate on the getaway car. It may be a domestic terrorist but is unlikely to be anything to do with “Tax Day” or other theories of left wingers trying to implicate the Tea Party or the political right. It could be a mental case like the Tucson shooter or the Newtown shooter but these cases are more likely to involve direct action, like shooting.

Ted Kaczynski, the Unabomber obviously was disturbed but not psychotic. His bombings were committed for a clear purpose and he was able to continue undiscovered for years.

From 1978 to 1995, Kaczynski sent 16 bombs to targets including universities and airlines, killing three people and injuring 23.

He was finally caught only because his brother recognized the rhetoric in a letter published by the New York Times. Kaczynski’s victims followed a pattern of technology and industry including an airliner, that fortunately involved a failed detonation. This Boston bomb seems to be more a random attack and the motive may be more difficult to identify unless the bomber is caught. I wonder if security cameras were located near that area.