It is a well establish principle when doing historical research that a source is regarded as “more reliable” the closer it was to the actual event, in both time and space. For example, if MacArthur’s chief of air operations General Kenney reported on Leyte Operations on December 1944 in a combat diary, that record is simply closer to the actual event than a statement made about those operations in his memoirs ten years later. Obviously this is not the only factor that decides the reliability of a source, but it is one of the more important. All other things being equal, a researcher should access and weight the former far more than the latter.

What I have found time and again — and written about here in my column — is that most World War 2 (WW2) histories, whether academic or popular histories, don’t bother to evaluate those wartime documents and they repeat the easier to access institutional narrative histories. This is becoming an increasingly problematic approach to history writing as the massive digitization of past primary source records and film material are now readily available outside traditional national archives.

It is in that vein that I am using this column to “lay down a marker” for evaluating US Army Air Force/US Air Force post-war institutional and oral histories using Sphinx Project official project result films from the Critical Past web site video service. The Critical Past web site has taken official government films and packaged them as video and digital photo content for purchase, but has left samples of the video content on-line. 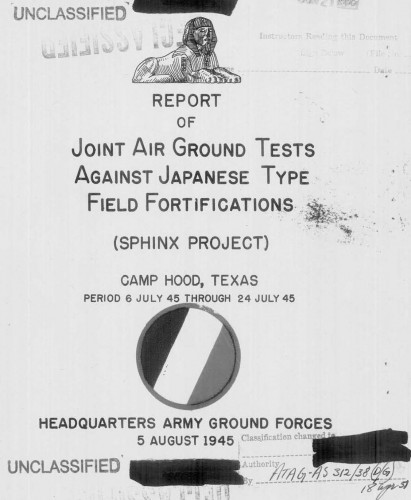 Historical Background
The Sphinx Project was a post-German VE-Day surrender, pre-Japanese VJ-Day surrender US Army crash project to take every weapon and tactic it had to create a uniform combat doctrine template to apply to Japanese “cave warfare tactics” seen in Biak, Peleliu, Iwo Jima and Okinawa. There were several separate Sphinx Project exercises by different parts of the Army. The best known of those exercises were the Army Ground Forces (AGF) exercises at then Camp Hood, (Now Ft. Hood) Texas in June-July 1945 hosted by the Tank Destroyer Command, and the Chemical Warfare Service (CWS) exercises with live lethal chemical agents at the CWS Dugway Proving Grounds in Utah. There were also two other exercises that are less well known by WW2 researchers that I intend to write on in this and future columns. The CWS and the US Army Armored Command’s Medical section did testing with a one-two punch of aircraft delivered defoliant and Napalm at Ft. Knox Kentucky, and the Army Air Force (AAF) did an exercise which was a round of conventional weapon air strikes on the same Dugway Proving Ground caves the CWS used in its lethal chemical tests.

What follows is a listing of the seven videos that were clipped from that AAF test report film with comments on content and their relation to U.S. Army Air Force politics/doctrine.

Comment: This is an introduction to the objectives of the project, and an introduction to several weapons including the 75mm armed B-25H Mitchell with AN/APG-15B range only radar and the 11.75-inch “Tiny Tim” rocket. The B-25H and AN/APG-15B was a Pacific Theater only weapon. It was used in China by General Chennault’s 14th Air Force and on USMC PBJ (B-25H in Marine Corps blue) in the Central Pacific to destroy Japanese controlled small ship traffic. Several B-25H with that radar were trialed without results in Mac Arthur’s South West Pacific Area at the same time, but Japanese barge and small ship traffic had gone extinct before it arrived. The radar allowed B-25Hs to engage Japanese ships with 25mm auto-cannons outside their effective range of 2,000 yards. The “Tiny Tim” is essentially a 500lb bomb on the end of an oil pipeline section with three 4.5 inch rocket motors inside. It was on two US Navy carriers in the Pacific. One, the USS Franklin, was struck by Kamikazes without using it and small numbers were used from a second carrier on Okinawa with no significant results reported.

Comment: This short film shows a P-38 Lightning fighter making a low level pass dropping Napalm at the mouth of a old mine shaft. The announcer was dismissive of both the accuracy and effect of the weapon, since it did not close a cave mouth. This was not born out by Pacific Theater combat results, as the mass use of Napalm by General Kenney’s 5th Air Force at the Ipo Damn in Luzon, Philippines was key to the victory. This was the first of a number of General H. H. “Hap” Arnold’s Bomber Mafia Men versus Pacific flyer issues in these films.

Comment: This section of the film shows low level and “Glide Bomb” attacks by P-38s into mine shafts with 1000lb bombs. The film is dismissive of dive bombing tactic as being accurate, which it was extremely so in USMC and US Navy hands. There is a good reason for this. USAAF fighters uniformly lacked large dive brakes. This meant they had to drop bombs far earlier in a dive to have any chance of avoiding a crash. The dive brakes on the US Navy Dauntless and Helldiver dive bombers made them slower in a near vertical dive, and hence, far more accurate than USAAF fighters.

Comments: In this video clip you see the P-47N Thunderbolt fighter and A-26 Invader light bomber firing a pair of 11.75-inch “Tiny Tim” and up to 10 each 5-inch high velocity aerial rockets (HVAR) in the same firing pass. As the two rocket types had radically different trajectories, the P-47N pilots had to split their attention to different sections of their sights in the same firing pass, with neither rocket attack being cave-destruction accurate. The A-26 was so grossly inaccurate with the “Tiny Tim” that its use on the aircraft was not recommended.

The emphasis on maximum bomb load and a single pass on the target is a pure European Theater, “Bomber Mafia”, tactical template. Pacific Theater USMC, and Philippine Campaign US Army Air Force fighters, made multiple passes striking ground targets. The Pacific Theater was always lean on munitions compared to the 8th, 9th, 12th and 15th Air Forces in Europe and they never faced German anti-aircraft defenses. There was the additional fact that the 25mm Japanese auto-cannon’s twin and triple mounts could not track targets faster than 280 knots air speed. German 20mm, 37mm and 50mm auto-cannons did not have this weakness and their were far more of them with better optical sights and better mechanical computer “predictors.”

Also missing here was mention of “VT” or radar proximity fused rockets. VT-fused rockets were like aerial canister fire in terms of fragmentation and could far more easily place deadly fragments into cave openings to destroy equipment and kill men inside caves. The USAAF Bomber Mafia was deeply afraid of VT-fused rockets as they made their heavy bomber “Combat Box” obsolete. There was much in the way of USAAF obstructive weapons development politics with VT-fused rockets and bombs to prevent their deployment anywhere, but particularly in Europe, for fear of USAAF Heavy bomber formations facing German copies of American VT fuses.

Comment: This is the first and only wartime AAF film that I have seen that admits the inability of high altitude bombers to hit point targets. The film communicates this by showing a B-29 dropping the British Tall Boy bombs on a series of cave targets and missing every time.

Comment: This is the first and only wartime AAF film that I have seen that admits the the inability of Medium and Heavy bombers to hit point targets at from 2,000 to 10,000 feet altitude using horizontal bombing. The film recommend the use of three B-17 or B-29 bombers “Vee” of three planes dropping tight clusters of 1000lb and 2000lb bombs to overcome deflection errors in dealing with point targets. The clip closes showing a six plane squadron of B-29s in two trailing “Vee” formations.

General Curtis LeMay’s post-war claims that strategic bombers “didn’t do tactical missions” needs to be understood in relation to this late Summer 1945 film. These small heavy bomber formations were common with 5th Air Force B-24 groups supporting ground troops in the Luzon.

Comment: This is the last clip from the AAF Sphinx Project film I found at the Critical Past web site. It is a summary of the effects of the weapons used with the observation that the effective circular error probability (CEP) for closing cave entrances — the measure of effectiveness in this test series, amounted to the crater diameter of the bombs used.

Closing SummationThe Sphinx Project video clips show that many of the post-war claims of the US Army Air Force “Bomber Mafia” as placed in their institutional history are not supported by wartime tests of their primary weapons, the B-17 and B-29 bombers. Nor are their claims regards air doctrine to be used during the cancelled Operation Olympic Invasion of Japan. This is a powerful example of the real power of the new Digital technology to change our understanding of 20th Century history past the old institutional narratives.

8 thoughts on “History Friday: Videos of The Sphinx Project & Laying Down A Marker”