I hadn’t thought of this situation, only because I didn’t have enough imagination to see that politics trumps all with Obama.

A growing consensus of IT experts, outside and inside the government, have figured out a principal reason why the website for Obamacare’s federally-sponsored insurance exchange is crashing. Healthcare.gov forces you to create an account and enter detailed personal information before you can start shopping. This, in turn, creates a massive traffic bottleneck, as the government verifies your information and decides whether or not you’re eligible for subsidies. HHS bureaucrats knew this would make the website run more slowly. But they were more afraid that letting people see the underlying cost of Obamacare’s insurance plans would scare people away.

This just didn’t occur to me. It should have. After all, what was Benghazi about ?

This political objective—masking the true underlying cost of Obamacare’s insurance plans—far outweighed the operational objective of making the federal website work properly. Think about it the other way around. If the “Affordable Care Act” truly did make health insurance more affordable, there would be no need to hide these prices from the public.

It is just amazing that the politicians know so little about technology (this was the guy with the Blackberry who made fun of McCain) that they did not understand that saying something doesn’t make it happen.

The federal government’s decision to force people to apply before shopping, Weaver and Radnofsky write, “proved crucial because, before users can begin shopping for coverage, they must cross a busy digital junction in which data are swapped among separate computer systems built or run by contractors including CGI Group Inc., the healthcare.gov developer, Quality Software Services Inc., a UnitedHealth Group Inc. unit; and credit-checker Experian PLC. If any part of the web of systems fails to work properly, it could lead to a traffic jam blocking most users from the marketplace.”

Jay Angoff, a former federal official at the agency that oversees the exchange, told the Journal that he was surprised by the decision. “People should be able to get quotes” without entering all of that information upfront.

And so it goes in Obama’s America. It is also a shame that the GOP was as ignorant of the prospects for failure as the Obama people. Had they known this, they might have chosen another tactic.

They knew that their people on the front lines, people like Henry Chao, were worried that the exchanges would get botched. They saw the Congressional Research Service memorandum detailing that the administration has missed half of the statutory deadlines assigned by the law. But they were more afraid of the P.R. disaster of crashing websites than they were of the P.R. disaster of disclosing Obamacare’s high premiums. What you see is the result.

Anybody still wondering why NASA was tasked with outreach to Muslims ? Why the tech billionaires support these dummies is still a mystery. Maybe it really is because their wives are obsessed with abortion. Or gay rights, as the case may be.

There is more to the story.

The most central name in the list of contractors, and the one most closely identified with the outward failure of Healthcare.gov, is CGI Federal, which the Sunlight Foundation describes as “a longtime provider of IT services to the federal government.” Most of CGI Federal’s previous work centered around technology services for Medicare and Medicaid. According to the New York Times, CGI Federal claimed many problems stemmed from the way the government itself managed the process, including the in-house coordination of the project between subcontractors rather than having a separate contractor do the coordination itself.

All the same, CGI Federal — which received $88 million for its work since March of this year — told Congress in September it was indeed ready for the onslaught of users that would come when Healthcare.gov opened to the public. The same was claimed by UnitedHeath subsidiary Quality Software Services, another partner in the project that received $55 million for its work.

Well, alright then. No problem ! The plot thickens. The rats will be running to the lifeboats the next few months.

UPDATE: Here is a representative chart: 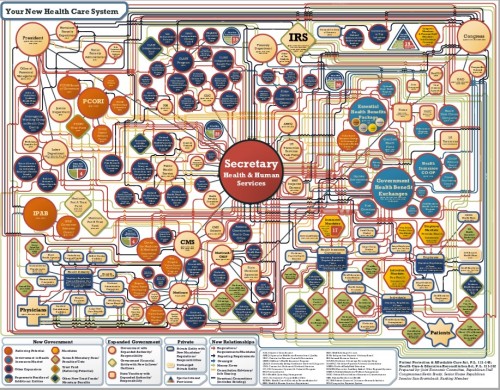 26 thoughts on “Why the Obamacare site is not working.”