I have written about optics before and am going to take another trip down this trail.

The prison escape in New York has my interest. I am sort of rooting for the bad guys. But not for the wrong reasons. The reason I am rooting for the bad guys is that I believe that folks need to understand that they need to be prepared to take care of themselves in emergency situations, rather than relying on “professionals”. In the end I want the murderers caught, of course, but in the meantime, we have some delicious drama brewing.

As I wrote back when the Boston police and others make a Keystone Cops type showing trying to chase down the Tsarnaev brothers, these are some pretty poor optics for the police, but they are doing everything they can to make it look better. I see the same old nonsense on TV – a line of cops saluting and marching down the street, all to make a show to the locals and/or folks watching on TV that they have overwhelming force and are going to catch the bad guys. This was done in Boston and also in Baltimore. Who put this in the official police manual to handle a crisis? I wonder if the manual looks like this:

Step one. We have a crisis. Everyone line up, salute and march down the street.
Step two. ??
Step three. Crisis solved. Praise all and treat everyone like a hero.

This is one of the most ridiculous things I have seen so far from a few days ago: 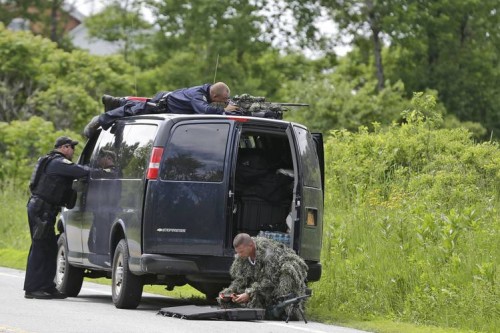 What on earth is going on here? Is the sniper actually looking to fire at something? Why aren’t the other guys at all concerned? Why is he laying on top of a van?

I keep hearing that the man hunt is “intensifying”. How much more intense can it get? They have all sorts of Hummers, choppers, sniper gear, and cops from who knows how many districts all looking for a couple of guys who are either laughing their asses off somewhere in Mexico, or very much hurting by now somewhere in the woods. Somewhere in the woods that all of these forces gathered have missed several times now.

I am sure it is super pleasant to be living in these towns right now.

What on earth was Cuomo touring the escape site supposed to prove? He will have zero involvement in the investigation or manhunt.

I know a thing or two about mechanicals, tools and steam pipes – we are not hearing half of what these guys did do get out of the prison – much of what the media has reported doesn’t make sense at all. I understand that the media is on the cops’ tether at this point, but I will be very interested to someday read just exactly what these guys did to escape. I imagine it took them years of planning.

If they get caught, we will hear some Seargeant or whoever claim how heroic everyone was, just like always.

I hope the public gets the sense that just like when the Tsarnaev brothers were keeping thousands of “professionals” at bay, just like these escapees are that they need to prepare to be on their own just a bit. But I won’t get my hopes up. So far, I would say that the cops have some pretty bad optics going as of now.