The “606” trail in Chicago opened recently. It follows an abandoned railroad track that starts in Bucktown / Wicker Park and heads west from there. I am very familiar with this track since I used to live in Bucktown a decade ago and stared at the crumbling bridges that split the neighborhood. 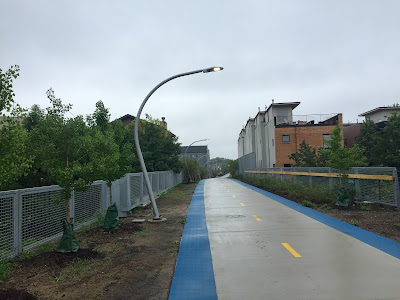 The trail is named after “606” which is the first 3 digits of the zip code in these neighborhoods. I guess that is an OK name but it’s kind of an obscure reference. Does anyone even send mail anymore? The park is sometimes compared against the High Line trail in NYC but the High Line is way cooler since it moves through a heavily urban area. But the 606 is a massive upgrade from just a crumbling set of train tracks. 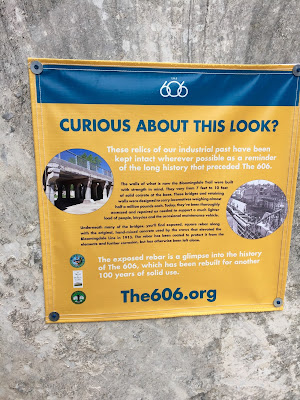 When they rebuilt the bridges and put down a bike path and walking trail along with shrubbery and lights they left a lot of the older architectural touches. This sign notes that the bridges were originally designed to hold a 500,000 pound locomotive engine; hopefully it can hold a few tourists and bikers today. 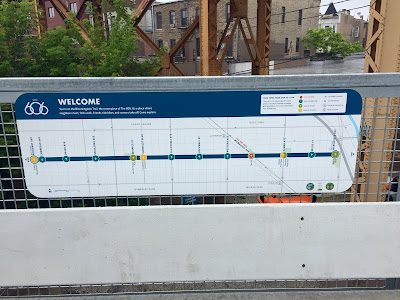 This is the trail map.  The trail goes East – West for a couple of miles.  The weather was lousy (rainy) so we started at the edge in Bucktown and got off at Western and then took the Blue Line back to River North.  I will walk the whole park when the weather is nicer and get off at all the parks and look around; it is a nice amenity for the city of Chicago.
Cross posted at LITGM