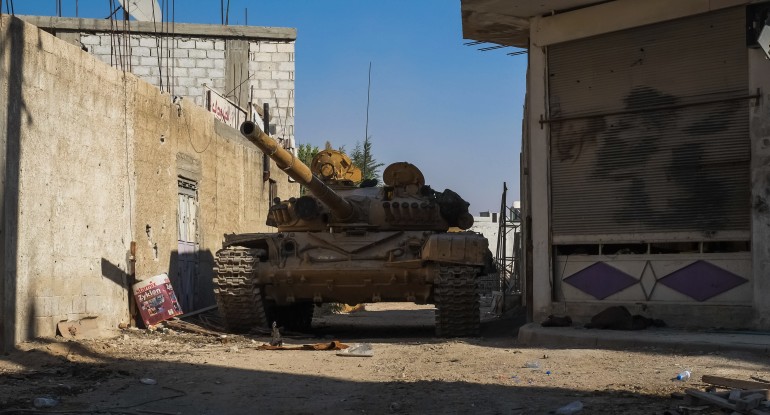 The US foreign policy conducted by the Obama administration has been a disaster all along. He abandoned Iraq and the rise of ISIS has followed. I have read “Black Flags

“, which describes how the al Qeada organization of Abu Musab al-Zarqawi has morphed into ISIS after Obama pulled US forces out of Iraq. Now, as Richard Fernandez explains in another masterful analysis, Assad is about to rout the last of the non-ISIS opposition.

Reuters reports that Bashal al-Assad’s forces have made major advances behind a major Russian air offensive and are now poised to destroy the non-ISIS rebels opposing the Syrian government is rocking the foreign policy establishment. “After three days of intense fighting and aerial bombardment, regime forces, believed to include Iran-backed Shia militias, broke through to the formerly besieged regime enclaves of Nobul and Zahra.”

The Russians have been surprising US military leaders in ways that are very unpleasant.

The performance of the miniature, “rust bucket” Russian air force has formed an invidious baseline to what the USAF has achieved. The Independent reported:

Their army’s equipment and strategy was “outmoded”; their air force’s bombs and missiles were “more dumb than smart”; their navy was “more rust than ready”. For decades, this was Western military leaders’ view, steeped in condescension, of their Russian counterparts. What they have seen in Syria and Ukraine has come as a shock.

Russian military jets have, at times, been carrying out more sorties in a day in Syria than the US-led coalition has done in a month.

We are not serious and the US military has to wonder what will happen if Putin decides to take the Baltic republics.

All this is happening alongside the weak consequences of Hillary Clinton’s massive breach of security in her “e-mail server.”

Remember, Mrs. Clinton reviewed her e-mails before finally surrendering them to the State Department, and she initially insisted there was no classified information in them. Now, it turns out they were so threaded with classified information that the State Department and intelligence agencies have fallen hopelessly behind the court’s disclosure schedule: The task of reviewing the e-mails and redacting the portions whose publication could harm national security has proved much more complicated than anticipated. Thousands of remaining e-mails, and any embarrassing lapses they contain, will be withheld from voters until well into primary season.

From the level of disinterest in this matter shown by Politico in its piece about Clinton’s “vulnerabilities” in the Democrat primary race, there seems to be no interest at all in foreign policy by Democrats. That may change if the Baltic republics are in jeopardy but, perhaps not. Democrats seem to believe that the US is the root of all evil, not our enemies.

As America’s foes gain in the Middle East, the confusion surrounding the administration’s goals correspondingly grows. If Aleppo falls, and its defenders and inhabitants massacred it will prove that Obama cannot protect anyone. A huge humanitarian disaster whose spillover Europe must inevitably endure will ensue. There is genuine international cooperation. Russia generates refugees and Germany absorbs them.

And as for Geneva, well what of it?

Someone has to ask: what goal does America still have in the Middle East beyond defending the tattered political image of president Obama?