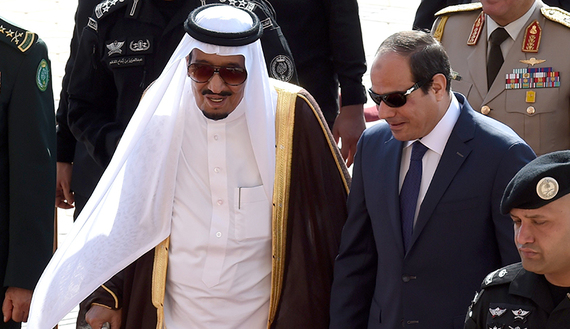 Obama has pretty much abandoned the Sunni Arabs in the Middle East in favor of Iran. This has been noticed, of course, and some new alliances may be forming.

Egypt’s April 9 announcement of the transfer of two islands, Tiran and Sanafir, to Saudi Arabian sovereignty came as a complete surprise to many in the Middle East. The only country that was not surprised was Israel. A top-level official in Jerusalem told Al-Monitor on April 12 that Israel had been privy to the secret negotiations.

The islands have a history that is interesting.

These islands originally belonged to Saudi Arabia, which transferred them to Egypt in 1950 as part of the effort to strangle Israel from the south, and prevent the Israel Defense Forces (IDF) from taking control of them. Israel embarked on two wars (the Sinai War in 1956 and the Six Day War in 1967) for navigation rights in the Red Sea. It took over these islands twice, but then returned them to Egypt both times. Now events have come full circle, and the Egyptians are returning the islands to their original owner, Saudi Arabia.

And Israel is privy to the negotiations and approves.

In the past, several proposals were raised regarding regional land swaps, with the goal of resolving the Israeli-Palestinian conflict. The framework is, in principle, simple: Egypt would enlarge Gaza southward and allow the Gaza Strip’s Palestinians more open space and breathing room. In exchange for this territory, Egypt would receive from Israel a narrow strip the length of the borderline between the two countries, the Israeli Negev desert region from Egyptian Sinai. The Palestinians, in contrast, would transfer the West Bank settlement blocs to Israel. Jordan could also join such an initiative; it could contribute territories of its own and receive others in exchange. To date, this approach was categorically disqualified by the Egyptians in the Hosni Mubarak era. Now that it seems that territorial transfer has become a viable possibility under the new conditions of the Middle East, the idea of Israeli-Egyptian territorial swaps are also reopened; in the past, these land swap possibilities fired the imaginations of many in the region. In his day, former head of Israel’s National Security Council Maj. Gen. Giora Eiland led a regional initiative on the subject. But he was stymied by Egypt.

Moving Gaza away from Israel would solve the rocket problem and the terrorist problem.

In light of America distancing itself from the region and the cold shoulder that Egypt has received from Washington in recent years, Saudi assistance and Israeli support to Egypt are viewed as critical to Sisi’s continued grip on the regime. And to complicate the situation even more, we can add the reconciliation attempts between Israel and Turkey; these have continued for many long months in marathon negotiations between the sides.

A highly placed Israeli official told Al-Monitor on condition of anonymity that the Egyptians don’t want to see the Turks in the Gaza Strip, and are strongly opposed to a rapprochement between Jerusalem and Ankara.

The Turks may have enough trouble with Syria and the Kurds to keep them busy. Meanwhile, a new alliance may be appearing as Obama arms Iran.

Another factor may be the new Israeli natural gas supplies.

There are even more interesting possibilities.

On this background, a revolutionary concept has been floated recently regarding the establishment of artificial islands opposite Israel’s coast; these would host the state’s main infrastructure facilities. The idea was proposed by two close Netanyahu associates. One is Shaul Chorev, who until recently headed Israel’s Atomic Energy Committee and was a former brigadier general in the navy, and the other is Zvi Marom, founder and chief executive of the Israeli technology firm BATM Advanced Communications. Netanyahu worked under Marom after Netanyahu lost the 1999 elections; since then, the two are considered to be close associates.

The artificial-island proposal contains an additional, even touchier idea: the option for civil nuclear energy in Israel.

Interesting times in the Middle East now that Obama has abandoned the Sunnis and Israel.

1 thought on “New Developments between Israel and the Saudis.”