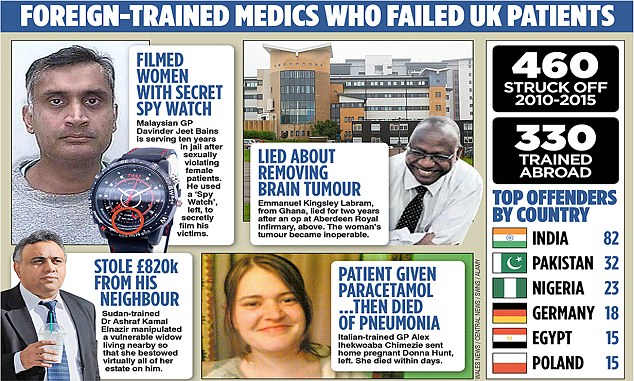 The coming doctor shortage that I have previously written about might be dealt with as Canada did with theirs some years ago, by importing foreign medical graduates. Britain has adopted a similar plan as thousands of younger doctors plan to leave Britain.

How is the plan to import foreign doctors working out ?

Nearly three-quarters of doctors struck off the medical register in Britain are foreign, according to shocking figures uncovered in a Mail on Sunday investigation.
Medics who trained overseas have been banned from practising for a series of shocking blunders and misdemeanours.
Cases include an Indian GP who ran an immigration scam from his surgery, a Ghanaian neurosurgeon who pretended he had removed a patient’s brain tumour, and a Malaysian doctor who used 007-style watches to secretly film intimate examinations with his female patients.

First of all, foreign medical schools are often limited in real experience and students often graduate with nothing beyond classroom lectures.

This was the case with Mexican medical schools, like that in Guadalajara where many American students attended. A program was devised to provide them with a year of clinical training before they could be licensed.

The revelations come just a week after it emerged health bosses want to lure 400 trainee GPs here from India, to help ease short-staffing in the NHS.
Last night Julie Manning, chief executive of think-tank 2020 Health, said: ‘The NHS has thrived on many international doctors coming to work in the UK – but the public needs reassuring they are all truly fit to practise in the first place.’

Of course, the foreign doctors have their defenders.

Dr Ramesh Mehta, president of the British Association of Physicians of Indian Origin, admitted ‘there is a problem’ with the high strike-off rate among foreign doctors. But he claimed racism played a part.

We have a similar problem with affirmative action medical graduates but the figures are not available about their rates of license revocation. For example, the The Alan Bakke case went to the US Supreme Court, which eventually ruled in his favor. By the time the court ruled, years had gone by and Bakke eventually did gradate from medical school and has practiced quietly ever since.

However, a black student admitted by the program that denied Bakke a place was subsequently prosecuted for gross negligence and his license removed. Affirmative Action has been vigorously defended.

An admissions process that allows for ethnicity and other special characteristics to be used heavily in admission decisions yields powerful effects on the diversity of the student population and shows no evidence of diluting the quality of the graduates.

However, the conclusion does not match the findings in the study.

Regular admission students had higher scores on Parts I and II of the National Board of Medical Examiners examination, and special consideration students were more likely to repeat the examination to receive a passing grade.

The article goes on to explain that There was no difference in completion of residency training or evaluation of performance by residency directors.

A friend of mine was the Chairman of the Department of Surgery at a UC medical school who decided to fire a black female resident for incompetence. He was advised by the UC system and the other department heads that he would lose a lawsuit if she filed one. She did, in fact, file such a lawsuit alleging racial prejudice (of course). The department chair was able to successfully defend his decision but the fact that no one else was willing to try explains the finding that There was no difference in completion of residency training or evaluation of performance by residency directors.

I have had the experience of being a Surgery Department Chair in a community hospital confronted with the application of a known incompetent surgeon. The same factors apply to those known to be dishonest. A request for a letter of reference from the department in which the applicant trained usually results in a response that states, “The applicant completed the residency from X date to Y date.” No other information is provided and a further request is usually answered by “The matter is in litigation”, or words to that effect. This applies to all such applicants but affirmative action individuals are almost impossible to find negative information on even if the “grapevine” has provided warnings.

The general concern can be found, but details are thin on the ground.

A quick scan of the documents reveals that white students applying to medical school with a GPA in the 3.40-3.59 range and with an MCAT score in the 21-23 range (a below-average score on a test with a maximal score of 45) had an 11.5% acceptance rate (total of 1,500 applicants meeting these criteria). Meanwhile, a review of minority students (black, Latino, and Native American) with the same GPA and MCAT range had a 42.6% acceptance rate (total of 745 applicants meeting these criteria). Thus, as a minority student with a GPA and MCAT in the aforementioned ranges, you are more than 30% more likely to gain acceptance to a medical school.

There are other sources of the facts, but they don’t appear in mainstream publications. Social Justice keeps most of these concerns underground.

A friend of mine, who is Cuban born and an immigrant as a child, applied to UC, San Francisco medical school. This was in the 1970s. Affirmative Action was well underway. He waited several weeks, then months, to hear if he had been accepted. Finally, he drove to San Francisco and asked someone in the Admissions Office what had happened to his application. He was told that it was in the “Hispanic Applicant Committee”. Having no idea what criteria such a committee might be using to determine who should be admitted, he asked if his application could just be considered as a “white” applicant. This was done and he received a letter approving his admission a few days later.

The pressure is now on medical education to provide the hundreds of thousands of new doctors this society believes it needs. Productivity of the present graduates is well below that of my generation. Some of that is the disappearance of fee-for-service practice which motivates work ethic. Some of it is a result of the 60% female medical school classes.

The female doctor population is acknowledged to work less.

Today, however, increasing numbers of doctors — mostly women — decide to work part time or leave the profession. Since 2005 the part-time physician workforce has expanded by 62 percent, according to recent survey data from the American Medical Group Association, with nearly 4 in 10 female doctors between the ages of 35 and 44 reporting in 2010 that they worked part time.

This was the reason why medical school admissions committees “discriminated” against female applicants in the 1960s when I was a medical student. They were concerned, even then, about a doctor shortage and assumed women would stop working to have children or practice part-time.

They were absolutely correct.

Canada is finding some productivity issues and even some explanation.

a fee for service model, and its inherent encouragement of increased productivity through increased volume of patients, a significant shift away from this single model is taking hold.

This, of course, will not deter the Social Justice types as more doctors with less productivity is somehow more efficient than paying doctors more to encourage higher work loads. Socialism is the aim, productivity will have to take care of itself.

In the meantime, PHYSICIANS WHO DID not attend medical schools in the United States or Canada, referred to as “international medical graduates (IMGs)”, play an integral role in the U.S. health care system. Such physicians now represent approximately 25 percent of practicing doctors nationwide.

15 thoughts on “Why Importing Foreign Doctors May Not Solve the Shortage.”