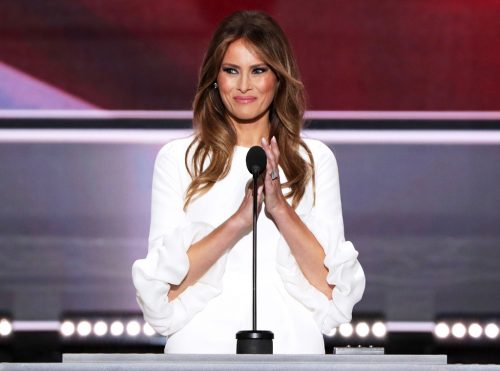 This story is more interesting and important than people seem to realize.

What do we know happened?

Melania Trump gave a speech at the Republican National Convention. The speech was long-anticipated, and long in preparation. It was considered by the Trump campaign to be a significant moment, where Melania Trump would be introduced to the public and her speech would humanize and soften the image of Donald Trump.

The speech, during and immediately after Melania Trump gave it, was considered a success. She is not a professional politician or otherwise a public speaker by profession. So, her smoothly delivered and well-received speech was a solid success for the campaign.

It was in the interests of Hillary Clinton’s campaign to undermine that success if possible. Denigrating Melania Trump for her looks, for the banality of the speech, and so on, were expected, and such mocking and insulting responses were of course under way during and immediately after the speech.

Soon after the speech, how soon exactly is a point worth of investigation, the word began to circulate that Melania Trump had plagiarized language from a speech by Michelle Obama. In fact, there were some phrases which were identical. “You work hard for what you want in life, your word is your bond, you do what you say” and “you treat people with respect”.

These phrases are not particularly noteworthy.

They are boilerplate, even banal.

Yet Melania Trump repeated them word for word.

These are all undisputed facts.

What are the open questions?

What possible advantage was there for Melania Trump to repeat Michelle Obama’s speech word for word?

There is no motive here.

Nonetheless, it is barely possible that Melania Trump knowingly repeated those words from Michelle Obama’s speech, thinking no one would notice, even though tweaking a few words would have removed any hint of plagiarism.

Perhaps Melania Trump is lazy, dishonest, and very stupid, and so indifferent to the success of her husband’s campaign that she knowingly plagiarized Michelle Obama’s language.

That is one possible explanation.

It is not convincing.

However, there is more.

There is also a passage in Melania Trump’s speech which is a direct quote from a Rick Astley song.

In other words, Melania Trump’s speech was Rickrolled.

To those who do not recall the fad from 2008 or so, Rickrolling was providing a link which purported to be something else, but in fact linked to a Rick Astley video, in fact, the very video whose lyrics were included in Melania Trump’s speech.

The only plausible explanation for the presence of these lyrics is that someone who participated in the drafting of Melania Trump’s speech intentionally included the Rick Astley lyric, apparently as a signal the speech had been “hacked.”

The Rick Astley lyric is a mocking gesture, a flipped bird from the saboteur.

There is no rational explanation for Melania Trump knowingly or intentionally including the Rick Astley lyric in her speech.

Someone who knew what the Rick Astley lyric represented included it in the speech.

Others have suggested that the so-called plagiarism might have been intentional sabotage by someone involved in the speech-writing process, e.g. this article.

In fact, there is no other plausible explanation.

Either Melania Trump knowingly included the plagiarized Michelle Obama quotes in her initial draft — or she did not.

It is barely possible she did, though highly unlikely.

Either Melania Trump “Rickrolled herself” — or she did not.

It makes no sense at all.

What no one seems to have pointed out is that the production of this speech, like any important written work product, is a heavily documented process.

Melania Trump and the Trump campaign claim that she wrote the speech. What precisely that means is not clear. What it likely means is that she drafted it, or prepared an initial draft. What is certain is that whatever draft Melania Trump prepared was then circulated for comment and editing. That is the standard process. It is inconceivable that she wrote something in private and then gave the speech to the Republican National Convention with no input or review by anyone else. To the contrary, we know that the speech was the result of a long drafting process and was rehearsed repeatedly, and probably revised and refined during that process as well. Some number of other persons were involved in the process.

The documentary evidence within the Trump campaign, including email traffic and draft versions of the speech, will show with certainty at what point in the drafting process the Michelle Obama language was added, and when the Rick Astley language was added.

The documentary evidence within the Trump campaign will also with certainty identify the person who added each of these items to Melania Trump’s speech.

If Melania Trump’s initial draft did not include this language, when was it added?

Who put it in?

What was that person’s motive?

Did this person act alone?

Was this a dirty trick done in collusion with others?

If so, with whom?

Did the person who added the language send email or text messages which can be examined to determine whether that person tipped off anyone to break the plagiarism story?

Did that person breach any confidentiality agreement or other agreement with the Trump campaign?

Is that person subject to a lawsuit?

How did someone hostile to Trump, willing and able to sabotage Melania Trump’s speech, penetrate the campaign organization undetected?

Are there other moles in the campaign organization?

These are all questions that need to be answered.

Determining precisely who was responsible, what their motives were, and how they did it, would be the kind of questions a real news media would be asking.

Instead, they are acting like the Democratic operatives they are, presenting the consensus anti-Trump narrative, while failing to note that it makes no sense.

Bottom line: A calculated attack was made on Trump’s campaign, his wife’s speech was hacked and an important success was turned into a circus and an embarrassment for the campaign.

We need to know what really happened.

We may be in for a season of more serious dirty tricks.

This episode should be thoroughly investigated.

A speechwriter has come forward claiming the Michelle Obama language was included in error.

This does not explain the Rickroll, however.