Skip to content
There appears to be an on-going, unofficial, and secret war in Syria between Putin’s Russia and the Iranian Republican Guard Corps’ Quds Force involving do it yourself drones in the hands of  Syrian Islamic Rebel “deniable assets” attacking Russian interests, particularly at the Khmeimim airbase.
.
First, look at this photo:
. 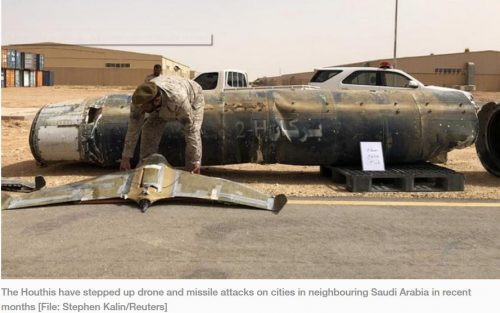 It comes from this 7-6-2019 www.aljazeera -dot- com story:
.
Saudi-UAE coalition says it intercepted Houthi drones
The Houthi drones were destroyed in Saudi Arabia’s airspace according to the military coalition.
https://www.aljazeera.com/news/2019/07/saudi-uae-coalition-intercepted-houthi-drones-190706201500555.html

Now look at this BBC photo, which comes from my Chicagoboyz post here: 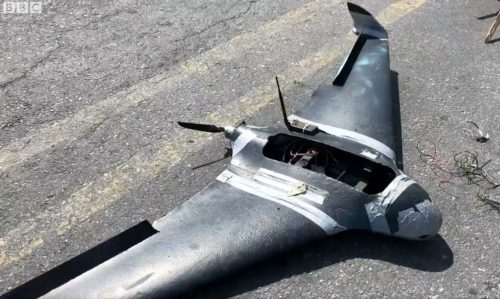 Both are identically produced drones made via a 3D laser scanned and 3D plastic body printed copy of a Russian Elevon Drone.   The top drone photo was involved in the just reported attack on Saudi interests by Houthi rebels on 7-6-2019. The bottom photo is from my report on D-I-Y drone attack on Russia’s the Khmeimim airbase in Syria during January 2018.
.
By way of comparison, the photo below is of a Russian Elevon drone downed over Syria by the rebels there.  There is no 3D printing or duct tape on this drone: 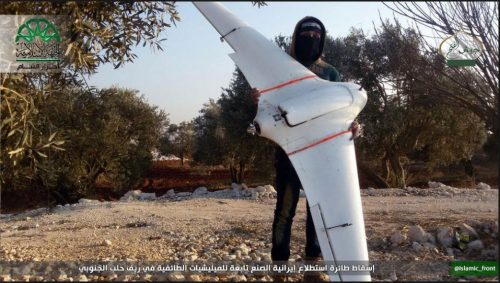 .
The common denominator for both D-I-Y drones is the presence of the Iranian Republican Guard Corps’ Quds Force in Syria and Yemen.  And the Quds Force has launched drone attacks on Israel from Syria and on Saudi Arabia from Yemen.
.
Strategypage is currently reporting from IDF sources that Russian GPS jamming in Syria is aimed at “Syrian Rebel” D-I-Y drones to defend Khmeimim airbase, and from anything else that might be in Syrian skies.
.
See:

Israel has been accusing Russia of causing GPS signal disruption in northern Israel since early June. Russia denies any responsibility but it appears that Russian EW (Electronic Warfare) equipment in Syria causes intermittent disruption of commercial aircraft GPS navigation systems over Israel. While Russia has EW gear specifically for GPS jamming or spoofing (create false signals), that does not appear to be what is happening here.Israel believes the GPS disruption is an unintended side effect of Russia using EW equipment heavily to protect their bases from Islamic terrorists attack using explosives equipped commercial UAVs, as well as other EW equipment being tested against the American F-22 and Israeli F-35 stealth aircraft that regularly operate over Syria. Russia EW gear, even the impressive new stuff, still relies a lot on “brute force” solutions. That means sending out powerful, multi-frequency jamming signals rather than less intense but more focused signals (which Western EW gear favors). Russia depends on export sales of these new EW systems to pay for developing them. “Unfortunate side effects” are not what they want to be associated with their new EW equipment and would, as is their custom, prefer to believe the bad news does not exist or is propaganda spread by jealous Western rivals. Israel maintains good relations with Russia in Syria by not revealing flaws found in new Russian EW gear or any of the new systems Russia has used in Syria. But this Russian systems flaw is impossible to ignore or explain without going into detail about how Russian EW equipment works. Russian and Israeli negotiators are trying to work out a mutually acceptable solution, as they have done so many times before.

Using Occam’s razor regards the origin of these drones, the simplest explanation is the Quds Force provided the same drone to both the Syrian Rebels that are fighting Assad and Russia and to the Yemen’s Houthi Rebels fighting the American supported Saudi Arabian Coalition in Yemen.
.
It appears that Iran’s Quds Force and Russia are fighting a secret war in Syria and all the reports of heavy GPS jamming by Russia in Syria -ARE NOT- aimed primarily at Israel or the USA. It is aimed at IRGC facilities/forces in Syria.
.
Photographic evidence says some of the D-I-Y drones attacking Khmeimim airbase are Iranian.
.
QED.
.
VALIDATING THE QED OF A QUDS FORCE/RUSSIA SECRET WAR
.
There are two tests that Western and particularly Israeli intelligence agencies can do to validate there is in fact a secret war between Russia and Iran’s Quds Force, and both involve electronic intelligence (ELINT).
.

While this is a possible intelligence indicator for Iran, since the Russians have sold Glonass guided weapons to Iran.  It is not proof positive.  A lot of commodity GPS receivers are “dual mode” i.e. they have embedded GLOSNASS capability.  Cheap Taiwanese made GPS receivers have had dual capability for years and some of the more expensive models also attempt to get a best solution by using both GPS/GLOSNASS C/A codes.  So jamming/spoofing against GLOSNASS exploitation by D-I-Y drone might simply be a case of through due diligence by the Russian Armed Forces in Syria.

.
Invasive ELINT platforms — IDF F-35 and USAF F-22 mentioned in the Strategy page piece plus drones — can do this inside Syrian air space. However, it will not be as easy as a few flights in and out.  Mapping Russian radiated signal patterns will be tricky as radio signal ground bounce distorts what you see from an airborne platform.
.
The Israeli Defense Forces are in the best position to accomplish this second ELINT test as their suite of drone capability likely includes more than a few multi-copter drones that can land disposable radio listening devices and other sensors near IRGC Quds Force facilities in Syria.
.
-End-