The Assistant Village Idiot links an Economist article and summarizes:

People with advanced degrees who are not prospering are often deeply resentful, certain that something must be wrong with “The System”*. I have worked with them for years, MSWs who believe that in a just world they would be entitled to the salaries that other people with their number of years of education get.  Other measurements, such as relative value to society, difficulty of the task, level of risk, and the like do not factor in…That they may have been lied to by the educational establishment or their upper-middle-class expectations (“For a good job, get a good education”), that they may have made poor economic decisions due to Following Their Dreams™, or that they may have chosen one of the easiest of Master’s degrees to pursue does not occur to them. It is largely political, cultural, and attitude training.

I don’t like the title of the Economist piece…”Can too many brainy people be a dangerous thing?”…which confuses intelligence with credentialism, but I think the point about highly-degreed and resentful people is spot-on.  I was reminded of a comment by Francis Bacon, who wrote 400 years ago that that one cause of mutiny and sedition in any polity is breeding more scholars than preferment can take off.

And 50 years ago, Peter Drucker noted that:

Individually he (the knowledge worker) is an “employee”…but the knowledge worker sees himself as just another “professional,” no different from the lawyer, the teacher, the preacher, the doctor, the government servant of yesterday.  He has the same education. He has more income. He has probably greater opportunities as well…This hidden conflict between the knowledge worker’s view of himself as a “professional” and the social reality in which he is the upgraded and well-paid successor to the skilled worker of yesterday underlies the disenchantment of so many highly educated young people with the jobs available to them.

Drucker was talking about people who are frustrated by their lack of status even though they are well-paid, as with the Silicon Valley protestor who complained that ‘tech workers are workers, no matter how much money they make.’  As I said in my post TechnoProletarians, as any field becomes a mass employer, it is likely that a substantial number of the people working in that field will feel that they are not getting the high status and rewards that they should have.  And the frustrations about which Drucker writes are surely greatly exacerbated when large numbers of people in a field are concentrated in the same geographical area.

And these frustrations are become extreme when the ‘knowledge workers’ in question are not highly paid…PhD-holders working as low-paid adjunct professors with no real hope of promotion, for example, or increasingly, tech workers facing downward salary pressures from H1B visa holders and the offshoring of programming work.

The media and authority figures that these individuals were exposed to them in their formative years were almost unanimous in the view that get a good college credential and everything else will pretty much take care of itself.  Consider this poster: 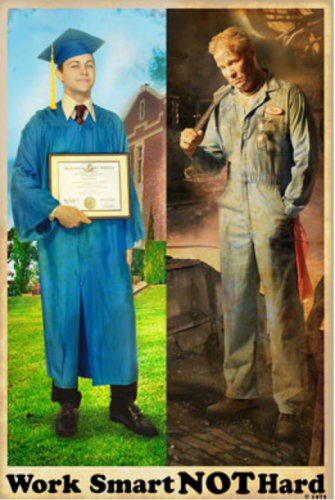 The above poster was apparently often found on the walls of high-school guidance counselors in the 1970s, according to Mike Rowe, whose critique of the poster’s message can be found here.  It certainly seems like an effective way to create a sense of entitlement among people getting degrees–with the more prestigious and advanced the degree, the higher the entitlement–together with resentment when those expectations are not fulfilled.  College loan balances contribute additional fuel to the emotional fire.