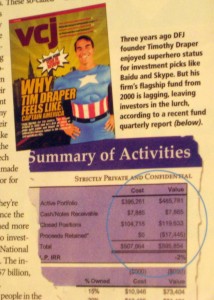 Recently I wrote about the troubles in hedge funds, where easy money in terms of 2% of assets and 20% of profits (easy to find when the market was moving up) has evaporated. Another field where someone a few years out of (an elite) college can make millions is… private equity.

Wikipedia has a decent summary of private equity. Private equity typically consists of taking a public company private by purchasing their equity shares, taking actions to increase the value of the company, and then re-launching the company back in the public markets and “cashing out”. Another path to private equity consists of taking equity stakes in start up companies (like the famous venture capitalists in the dot.com era) and then earning profits when the company goes public. Often the private equity firms raise “funds” with a time horizon, typically ten years, where they invest the money in a variety of investments and then the money is returned to investors at the completion of the fund, whether it results in new profits or losses.

Along with hedge funds, private equity made up a large component of the “alternative investments” that many endowments and wealthy individuals started to invest in en masse in the late nineties and into the current decade in search of higher returns. Typically these sorts of investors put their money into public market equities, debt and real estate – this “alternative investments” were supposed to bring higher returns and also not be not correlated with equity, debt and real estate.

Let’s start with the private equity plan which consists of purchasing public companies, taking actions to increase their value, and then re-launching them in public markets. An excellent summary of the troubles facing these types of buy-out firms was in a recent issue of Financial Times titled “Private Equity Must Prove Its Value” by Luke Johnson, who runs a private equity firm himself.

“It is not just investment banks and hedge funds that must reinvent their business model. Private equity has to do things differently in the future, otherwise backers will disappear, the money will dry up and credibility for the profession will be destroyed.”

There is a popular conception that many public companies are poorly run. Managers are looking out for themselves, worrying about their own compensation and perks, and not focusing on the shareholder. This is summarized in the “principal-agent problem” which has been researched at universities and was a core element of my business curriculum.

The theory is that if managers have a true stake in the company which aligns themselves with the goals of shareholders, they will increase the returns overall. In practice this usually has the following elements:

1) fire most of the existing management and many of the staff (become more productive)
2) close down non-performing business units (sacred cows)
3) bring in new management who will be compensated in some sort of equity fashion so that they make huge profits if the company does well or make little money if they don’t
4) look for “hidden assets” that can be sold to raise value, such as real estate, headquarters buildings, or long term leases at below market rates

In order to make the purchase of the company in the first place, the private equity firm usually raises a lot of debt. Debt used to be easy to come by; you could raise billions from banks or investors at reasonable rates (say 5-7%). It was also assumed that you could refinance existing debt easily and the markets were liquid. The debt was often “covenant lite” meaning that it didn’t require limitations on debt levels or mortgaging existing assets (i.e. the lender would have first “dibs” on assets like factories and land if the company went bankrupt).

Many of the companies that were purchased in this manner have ended up in bankruptcy recently, or even been liquidated. Prominent bankruptcies include Mervyns, Bennigans, Linens N’ Things, and many others. This is likely the tip of the iceberg and I would expect to see many more bankruptcies such as this in the near future.

Often the companies were not changed significantly; they were leveraged up with debt, the private equity owners gave themselves large dividends, and then they were hit by a business downturn which swamped the companies. The private equity owners often didn’t bring much to the table in terms of OPERATIONAL innovation; they did bring financial “innovation” in the form of higher debt and leverage. It is likely that the fact that companies which were reasonably healthy when purchased (Mervyns) ended up being liquidated (with many of the staff members receiving almost no severance) will hurt the already-poor image of these private equity firms.

The other type of private equity (broadly defined) consisted of investing in early stage enterprises, and then supposedly earning big returns after they went public in an IPO. The “classic” cases of this type are firms like Netscape, Google, etc… where the early investors pocketed huge returns. This model assumes a few things – 1) many of the investments won’t pan out 2) there is a liquid, exit market for IPO’s to earn the big returns 3) the venture capital backers have contacts and knowledge that will help the odds of a given startup to become more successful 4) this model raises money and then pays it out to investors over a decade or so, and you can’t judge the “true” returns until near the end.

This (unfortunate) photo shows a big private equity investor dressed up as superman during the height of the boom… and how things are really going now. While the “leveraged buyout” crew really just gorged on cheap debt and stupid lenders until the bottom fell out (they walk away rich, either way) the venture capital guys have been crushed by the fact that the IPO market is completely frozen so there is no way to cash out their investments. Likely many of the venture capital ideas were “me too” ideas (such as the rush to cash in on Web 2.0 ideas) and the backers really didn’t bring that much to the table. An interesting alternative were the guys who cashed out with PayPal – here is an article about them – and how they do things differently than the traditional private equity guys by leaving management in place and letting them even cash out a bit along the way, as well as putting in less cash up front and “bootstrapping” the business.

The denting of the leverage buyout model is due to the fact that 1) many of the private equity companies don’t know how to run the businesses, they just know financial engineering 2) the easy money / low interest loans are long gone. The private equity / venture capital guys have been smashed by the fact that the IPO market has seized up and frankly they didn’t back a lot of the winners. Maybe their model is broken, and they should follow up with that Paypal model.

Remember – these guys didn’t just make salaries / bonuses… they made millions, with a cut of all the assets received as well as 20% of any profits received along the way (they are mostly under water now, so they don’t earn the 20% until they cross the high water mark, but they aren’t giving it back). At least the venture capital guys tried to start businesses… the LBO guys were just taking a flyer with the existing employees and customers and rolling the dice. If the bet is bad, no skin off their back.