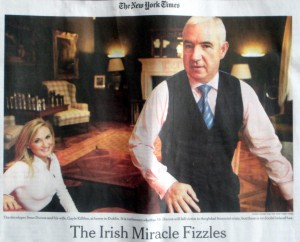 A recent NY Times article highlighted the impact of the financial crisis on Ireland, a country which had previously been riding high on a property boom (and also low tax rates and generally sound economic policies).

There is a photo of a property tycoon and his lovely wife (recently married), 20 years his junior, above. From the article:

The Celtic Tiger my be dead and if the banking crisis continues I could be considered insolvent. but the one thing that I have is my wife and children – and they can’t take that away from me

No, Mr. Tycoon, THEY can’t take her away from you, but your real risk is that she’ll leave on her own.

The picture of an older executive and his hot young wife, 20 years his junior (presumably wife 1.0 was paid off and is out of the picture) is everywhere in the high finance pages. A lot of these guys, for all their tales (they tell) of how they started off humbly, have immense egos and probably actually believe that the reason that an attractive, far younger woman is with them is due to their intrinsic worth.

But it isn’t their intrinsic worth, it is often their wealth. His new, shiny wife is a gossip columnist, and apparently likes expensive things, like a 2 week cruise in a giant yacht with 20 of their closest friends.

It will be interesting to see what the social order looks like when these formerly VERY wealthy men can’t provide all the luxuries, nannies, houses, and other requirements of their high maintenance, younger wives. Will the wives stand by their (grey) men, or go in search of more age-appropriate mates (or a different, older, rich one).

There have been articles about the impact of the financial crash on families, and it is in poor taste to laugh at the misfortune of others. I did have a little chuckle, I admit, when I read an article about the reaction of a laid-off Lehman employee’s wife that “This wasn’t the Plan!” when they had to downsize out of their McMansion and start living within their reduced means. I could see that she traded her biggest asset, her looks, with the expectation of receiving economic gravy in return, and she was calculating that she had received the short end of the deal. Unfortunately, he isn’t getting any richer, and you aren’t getting those years back, baby.

53 thoughts on “A Change in the Social Order”