Yesterday I attended the Wisconsin Economic Forecast Luncheon. I was invited by a financial institution that I work with, who had a table reserved. The purpose of the meeting was to network, and to hear speakers talk about the forecast for the future as far as business goes. I would guess that there were about 500 people there representing all types of business across Wisconsin. There were lawyers, bankers, construction company owners, and many other business represented. Also attending were mayors of some cities, and many state representatives and senators.

There were two speakers. The first was Wisconsin Governor Jim Doyle. I had no idea that he would be there, but he was. He opened up the luncheon with a 45 minute speech. 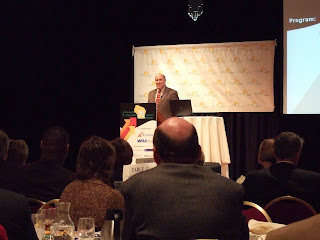 Doyle is a rather poor public speaker. I remembered this because many years ago I attended the “State of the State” address at the capitol here in Madison and it was brutal. Yesterday was about the same. He stuttered a lot and there were a lot of uhs, ehs, erms, and other filler. It is very annoying. Maybe others don’t find this distracting, but it bothers me.

After you filter out all of the nonsense, Doyle’s talk boiled down to two main points.

That’s it, unfortunately. Everything else Doyle said was fluff or gimmick, typical politician speak.

Next up was Dr. Charles Evans, CEO of the Fed in Chicago. I was really looking forward to his remarks. 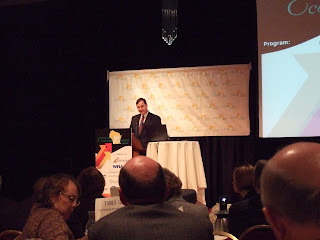 Boy was I disappointed. Dr. Evans basically gave a short 30 minute talk in which he described things that happened over the last quarter of last year, such as the meltdowns of Lehman, Bear, AIG and others, and what the Fed did. He also talked a bit about policy right now (he is on the board of the FOMC). I didn’t learn a thing. In fact, I would guess that anybody that follows financial news even on a casual basis didn’t learn anything. I understand that Evans needs to keep his cards close to the vest on some things, but for a man of this stature to give a speech and not even get to some meat is a bit puzzling to me. Honestly, if you read Bloomberg or Yahoo Financial or the WSJ on a semi-daily basis you knew this speech inside and out. I was very disappointed. There was a short Q and A after the speech, and Evans tap danced quite a bit, almost as if he was acting like a politician. Maybe his position is more political than I realized.

I was glad I went, if not for the speakers, for the conversation at the tables with other business people. That was worth going. The speakers were not.

To sum it up in a few words, this was an afternoon wasted. And I had to walk a block in the blistering -15 cold to boot.