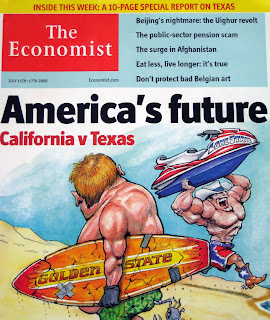 I am a subscriber and a regular reader of the Economist despite their maddening tendency to recommend US presidential candidates that are left-leaning. The Economist is very useful on business and international issues and their US focused articles sometimes have a candor and simplicity that is lacking elsewhere.

A recent cover story titled “America’s Future – California v. Texas” described the falling fortunes of virtually bankrupt and high-tax California against the high flying economy of Texas. In typical Economist style, there is a one-page editorial type summary of the article in the front of the magazine and then two special sections on California and Texas, respectively.

One critical element of the story, however, is mentioned nowhere in The Economist’s article – that is of personal freedom vs. state control.

London, as anyone who has visited recently will tell you, is completely blanketed with security cameras. Virtually the entire city is under surveillance. At the same time, London has completely disarmed its residents of any firearms. Even the police, for the most part, are unarmed (although they do have heavily armed police at the airport and on call for other types of engagements). And building anything in London is difficult and slow, with myriad restrictions; notably they limit the heights of buildings and also require extensive open spaces outside the cities. London also has a famous congestion tax, which hits all drivers who enter the city limits and is managed through a vast system of security cameras, as well.

It isn’t fair to say that everyone in London is behind all of this; but these facts are generally accepted by the populace and aren’t likely to be changed any time soon.

The Economist basically reflects many of these views; they support free markets but with a huge dosage of state control. They have limited use for other types of freedom, such as the right to bear arms, or to live your life in private, or to drive where you please without paying inordinate taxes.

In these items they can feel a similar kinship with the liberals that run California. California has implemented their own “green” policies and controls on businesses where ever possible. Gun control and limits on ability to build or expand properties (except those that they already own, of course), are their stock in trade. California has high taxes (like London) and is marked as the least favorable business climate in America. Unions are viewed positively overall (or at least accepted) among the California liberal elite as well as London.

The interesting thing is that as The Economist looks to Texas, they miss out on the larger context of what “freedom” means. While London has no guns, Texas has essentially empowered their own citizens and businesses to arm themselves. When I lived in Houston about a decade ago, not only was concealed carry widespread, most larger businesses (pretty much every large grocery store or big restaurant) had an armed security guard at the door. Other laws, including “stand your ground” have been implemented in Texas in one of the most liberal senses in the US. A local bank near where I lived had a guard who was lauded because he saw robbers (guys wearing masks) coming up towards the bank and he shot them in the driveway before they even entered the bank. There were so many stories like this down in Houston that I don’t even think they all made the paper – most of what I heard came from friends or colleagues.

In addition, Houston had no zoning whatsoever when I lived there. Near my apartment was a home for the blind, a large factory, and other buildings inter spaced together. Not far from our apartment was a 60+ story skyscraper, sitting virtually alone in a business neighborhood. Zoning in other parts of Texas was limited, as well.

Since there were no unions in the construction trades (that I was aware of), buildings were put up in an unimaginable time. In the mid-1990’s I saw a PF Chang’s on Westheimer Road built in what seemed to be just DAYS – they put up spotlights and worked around the clock – it was amazing. One week I left to travel and it was a parking lot and I came back a week later and the exterior was largely completed.

Texas has always leveraged its energy resources – laws are friendly to drilling and oil and natural gas are a backbone of the economy. California, by contrast, does all it can to ensure that no one drills offshore or otherwise extracts or transports energy in the state. Texas also “walled off” their electric grid from the rest of the US and worked to ensure that there was adequate capacity, while California failed to invest and actively tried to shutter key electric plants (such as their nuclear plants).

I think that there is a lot more to the changing of the guard in America’s economy from California to Texas than The Economist understands – they ought to move down to Texas for a few years and get a first-hand education. Freedom includes the right to bear arms, a lack of unions, and a general freedom to improve your property without intrusive state control. Also note that freedom includes a limited role for the state, and California has the highest personal income taxes in the nation while Texas has no income tax.

It is hard to believe that they wrote these articles without highlighting these key differences as to why California was declining and Texas rising – they mentioned demography (net inflows and outflows of residents) – but they didn’t discuss the CAUSE of the demographic changes, which include:

The Economist should open their eyes to the full picture of what works and what doesn’t. A heavy handed state drives away new business and entrepreneurial leaders, and unions and government squeeze the rest until it all falls apart.

27 thoughts on “Texas and London”