Recently in Illinois a scandal broke out regarding preferential admissions at Illinois public universities, notably the University of Illinois in Champaign-Urbana. Politicians were forwarding lists of applicants (who otherwise would not have been allowed to attend because they lacked the requisite credentials) and these “connected” applicants were accepted ahead of more qualified but “unconnected” residents. 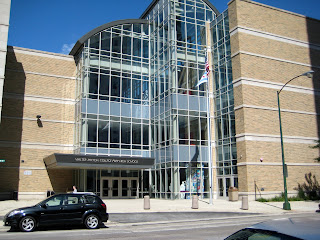 The scandal has now moved on to other educational institutions, notably the “magnet” high schools such as this Walter Payton High School on Wells street in the River North area of Chicago (it is actually halfway between River North and Old Town). Here is a link to a Chicago Tribune article on the subject. Here is a more recent article… now the Federal authorities are getting involved.

The real issue, however, aren’t the specific instances of corruption. The broader picture is what our country will look like in the future as the government controls more institutions due to economic failure (car manufactures like GM, financial institutions like Citicorp, AIG and Fannie Mae and Freddie Mac) or due to encroaching powers (perhaps the entire medical industry).

In my study of the Soviet Union under communism (or for the more critically minded, the dictatorship that lasted until 1991, since “true” communism was never implemented) one word continually popped up – “Nomenklatura“. I couldn’t spell it off the top of my head until I found some research papers and then of course there was a solid definition at Wikipedia, from which I quote:

Milovan Djilas wrote of the nomenklatura as the new class in his book New Class: An Analysis of the Communist System, and that it was widely seen (and resented) by ordinary citizens as a bureaucratic élite that enjoyed special privileges and had simply supplanted the earlier wealthy capitalist élites.

It is important that people realize that these government institutions will not be transparent nor will they be fair. A new, parallel system of privileges and favors will arise that will supplant our current system, which is largely cash based. As the government owns and controls more of society, it will be more important than ever to covet the friendship and favor of the Nomenklatura that will control access to queues and prestigious posts.

Luckily we have an entire body of knowledge of how the US will fare as government control increases – our study of the former Communist countries (which was largely done as a response to their military threat, since it was important to understand the “enemy” at the time). For example you can go here and see an interesting research paper related to the topic.

The occasional articles we see on corruption in the system are missing the point; the ENTIRE system will eventually be riven with corruption, because that is essentially how these sorts of socialistic enterprises all end up being run. It isn’t the spots on the dog, but the dog itself.

9 thoughts on “The New “Nomenklatura””