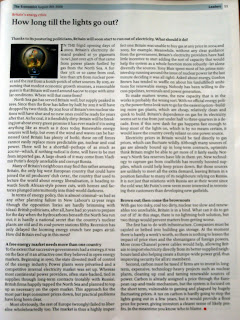 The Economist recently wrote an editorial called “How Long Till the Lights Go Out?” describing the electricity situation in Britain. The byline was

Thanks to its posturing politicians, Britain will soon start to run out of electricity. What should it do?

As a long time writer on electricity and energy, I was pleased that The Economist at least hit on the core of the issue:

In 2009 Britain’s electricity demand peaked at 59 GW. Just over 45% of that came from power plants fuelled by gas from the North Sea. A further 35% or so came from coal, less than 15% from nuclear power and the rest from a hotch-potch of other sources. By 2015, assuming that modest economic growth resumes, a reasonable guess is that Britain will need around 64 GW… where will that come from?

This is the HEART of the issue. Electricity has to be generated from somewhere, and traditional sources of generation are 1) Coal 2) Gas 3) Nuclear 4) Hydroelectric 5) everything else (generally insignificant).

For environmental reasons, no new hydroelectric will be sited anywhere in a Western country of any significance ever – due to the fact that this floods areas and alters streams and rivers – it just isn’t happening.

There won’t be any significant new capacity coming on for nuclear power in any Western country – don’t let the press releases fool you – and the current capacity is getting old and winding down.

Coal has a bad environmental rap and it is hard to imagine any new coal plants being built in any Western countries (but they are throwing them up as fast as they can in China, and since we all have the same atmosphere, what is the difference? But that is grist for another post).

Thus you are essentially down to natural gas. The economy of Britain has been floated by the fact that the UK has north sea resources so this can be tapped and used to fuel power plants without causing adverse effects on national finances (since Britain can tax the natural gas and the money flows within the country as opposed to going overseas to dubious regimes, although in this case it would be Norway).

After hitting the nail right on the head by focusing on generation as the true issue, then The Economist opens up on what is likely to occur next, which is the deterioration of service, as in “when the lights go out”. The longer companion piece to the editorial discusses South Africa, where frequent blackouts left home owners security systems down leading to criminal attacks until a crash building scheme alleviated the issue. This is what is also occurring today in London and parts of the United States, as a lack of generation results in more frequent blackouts, outages and power curtailments that are only going to get worse as the fleet ages and there is nothing in the pipeline to replace the equipment.

There are three issues that The Economist doesn’t hit hard enough:

1) the fact that when the UK and the US rely heavily on natural gas, and the gas isn’t sourced locally within the borders, this will start to significantly erode the public finances of the our countries the same way sending large amounts of dollars for gas and oil (mainly to Arab countries, dictatorships like Nigeria and Venezuela, and also Russia) has done, while propping up many of the most odious and troublesome governments. We easily have the ability to source power within our borders using local fuel if we use other sources, such as coal, or use a modest amount of natural gas
2) even if you are a big believer in environmental issues, “pinching” the US and British economies by starving it of reasonably priced and reliable electricity does nothing in the grander scheme to slow global warming because China is adding 100 GW / year of power capacity, 2/3 of which is coal fired (with little environmental equipment, by Western standards), as much as the entire generating capacity of Britain. It is like we are focusing on a match in the corner while an entire forest burns over to our right, completely pointless
3) businesses are being hit by the unreliability of generation today, in that they have to buy expensive backup capacity and make many other decisions based on the fact that electricity is unreliable and the situation is about to get significantly worse in the future. Plants / buildings / data centers are planned based upon the availability of power, which is mostly an historical artifact of decisions made decades ago or lack of residential growth in a specific area, and this is distorting to our economy
4) China is building a powerhouse economy, powered by cheap and reliable electricity, while we are starving ours of power and investing little or nothing in base load capacity. This may not be a good omen for the future. Western pushing on human rights recently gained nothing in Tibet, where China cracked down with impunity (sorry, Beastie Boys, those sit-ins didn’t do the trick)

13 thoughts on “The Economist on Britain’s Electricity Situation”