For no good reason that I have ever been able to figure out – the figure of the cowboy remains about the most dominant figure in our mental landscape of the Wild West – the version of the 19th century American frontier that the public usually knows best, through novels, movies and television. The version of the Wild West which most people have in mind when they consider that period is post-Civil War as to time frame and available technology, and most often centered on aspects of cattle ranches, cow-towns, and long-trail cattle drives – and the hired men who performed the grunt work involved – or those various forces arrayed against them; homesteaders, rustlers and assorted other stock baddies. The long-trail drives actually took place over a fairly limited time; about ten or fifteen years, but those few years established an undying legend, especially in the minds of people anywhere else or at any other time. The realities of it all, of course, are a bit more nuanced, a bit more complicated, and perhaps a bit more interesting. 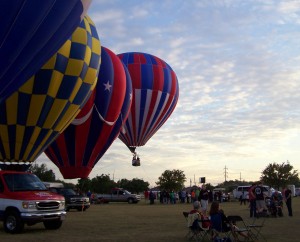 At the balloon festival in Abilene, Texas – 2010