Hugh Hewitt interviewed General Stanley McCrystal on his radio show yesterday and the interview is pretty interesting. McCrystal has a memoir out called My Share of the Task

and a new book on leadership called, Team of Teams

The discussion is pretty interesting. First of all, McCrystal was fired by Obama after a reporter printed a story about McCrystal’s officers disrespecting Obama.

In a statement expressing praise for McChrystal yet certainty he had to go, Obama said he did not make the decision over any disagreement in policy or “out of any sense of personal insult.” Flanked by Vice President Joe Biden, Defense Secretary Robert Gates and Adm. Mike Mullen, chairman of the Joint Chiefs of Staff, in the Rose Garden, he said: “War is bigger than any one man or woman, whether a private, a general, or a president.”

Of course, it was Obama’s petulance and sense of outrage that anyone would think him less than competent.

In the magazine article, McChrystal called the period last fall when the president was deciding whether to approve more troops “painful” and said the president appeared ready to hand him an “unsellable” position. McChrystal also said he was “betrayed” by Ambassador Karl Eikenberry, the man the White House chose to be his diplomatic partner in Afghanistan.
He accused Eikenberry of raising doubts about Karzai only to give himself cover in case the U.S. effort failed. “Now, if we fail, they can say ‘I told you so,'” McChrystal told the magazine. And he was quoted mocking Vice President Joe Biden.

McCrystal has emerged looking better and better and is obviously a great leader and general. Some of the interview’s insights into his leadership are worth repeating. I plan to read both books.

The rise of ISIS seems to have caught the attention of hitherto oblivious segments of the US public. Cutting off the heads of western journalists seems to do that. What we are seeing is the total collapse of civilization in that part of the world.

That is what civilizational decline looks like in real time. The roots of the crisis were visible four years ago before the so-called Arab Spring beguiled the foreign policy wonks. Hundreds of thousands of displaced Syrian farmers already were living in tent camps around Syrian cities before the Syrian civil war began in April 2011. Israeli analysts knew this. In March 2011 Paul Rivlin of Tel Aviv University released a study of the collapse of Syrian agriculture, widely cited in Arab media but unmentioned in the English language press (except my essay on the topic).

The Syrian food crisis had a lot to do with the collapse of Syria.

In response to the Tunisian and Egyptian uprisings, President Assad reduced taxes on oil and sugar, and cut import tariffs on basic foodstuffs. This action had unintended consequences. A blogger on the Syrian website sy-weather.com reports, “I spent fifteen days on formalities to reduce customs duties on some basic food items, but I have not seen a glimmer of hope on the horizon. This was supposed to reduce the prices of the targeted goods. On the contrary, a liter of oil that sold for 65 Syrian pounds [US$1.38] now sells for 85 pounds.” That’s an increase of 30% over the month. Other bloggers report that the prices of basic foodstuffs have risen by 25% to 30%.

This has resulted in the presence of 14 million refugees with no hope of relief.

When I wrote in 2011 that Islam was dying, this was precisely what I forecast. You can’t unscramble this egg. The international organizations, Bill Clinton, George Soros and other people of that ilk will draw up plans, propose funding, hold conferences and publish studies, to no avail. The raw despair of millions of people ripped out of the cocoon of traditional society, bereft of ties of kinship and custom, will feed the meatgrinder. Terrorist organizations that were hitherto less flamboyant (“moderate” is a misdesignation), e.g. the Muslim Brotherhood (and its Palestine branch Hamas), will compete with the caliphate for the loyalties of enraged young people. The delusion about Muslim democracy that afflicted utopians of both parties is now inoperative. War will end when the pool of prospective fighters has been exhausted. 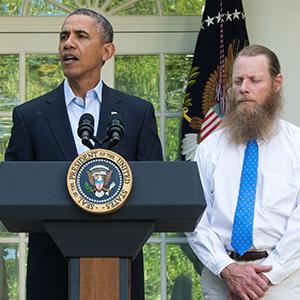 The world got a little more bizarre this week. President Obama worked a trade that involved releasing five serious Taliban leaders in return for the freeing of an army deserter from Afghanistan. Bowe Bergdahl was a private who seems to have walked away from an outpost in Afghanistan and ended up with the Taliban. There are a number of stories surfacing from other members of his unit about his departure.

The handling of the announcement has drawn considerable criticism from conservatives.

The story of how the Bergdahls ended up at the White House is pure turnip-truck territory. According to Time:

Their presence at the White House on Saturday was the apparent product of coincidence: the couple had visited the capitol for a Memorial Day event and then stayed in town for meetings in Congress. Had they been at home in Idaho when the deal was announced, they likely would not have flown to Washington to appear with Obama—and a key visual element of the drama, replayed endlessly on television, might not have occurred.

Does anyone believe that ?

I know, it was a bitterly ironic movie

it was based upon was even more bitterly ironic (Trust me, I read the darned thing –eh – moderately funny, but I fear that the only thing that the move took away from it was the premise) but what we may have here *assuming Strother Martin voice* is called a failure to communicate. I mean the imbroglio with returning Bowe Bergdahl, the only recorded POW from the war in Afghanistan to the bosom of his family, after languishing in durance vile for five long years.

A new book by a retired army general explains that we lost the Iraq and Afghanistan wars. Why ?

I have had reservations about Iraq for years, at least since 2008.

When President Bush convened a meeting of his National Security Council on May 22, 2003, his special envoy in Iraq made a statement that caught many of the participants by surprise. In a video presentation from Baghdad, L. Paul Bremer III informed the president and his aides that he was about to issue an order formally dissolving Iraq’s Army.

I think that decision probably lost the post-invasion war. The other puzzle that was not explained until the recent book, Days of Fire

explained it, was why Bremer was put in place of Jay Garner, who had done well with the Kurds.

Garner began reconstruction efforts in March 2003 with plans aiming for Iraqis to hold elections within 90 days and for the U.S. to quickly pull troops out of the cities to a desert base. Talabani, a member of Jay Garner’s staff in Kuwait before the war, was consulted on several occasions to help the U.S. select a liberal Iraqi government; this would be the first liberal Government to exist in Iraq. In an interview with Time magazine, Garner stated that “as in any totalitarian regime, there were many people who needed to join the Baath Party in order to get ahead in their careers. We don’t have a problem with most of them. But we do have a problem with those who were part of the thug mechanism under Saddam. Once the U.S. identifies those in the second group, we will get rid of them.

Had Garner continued with that policy, we might have been out of the cities in a few months instead of years, as was the case with Bremer.