“What the USA did was to take the patterns and toolkit the British used to create their society, and to simplify, universalize, and generalize it until it became a versatile template that could quickly convert expanses of raw land into new, functioning self-governing communities without a thousand years of cultural evolution, and a concept of citizenship that could take European peasant communities who had been dumbly following orders for a thousand years, and turn them within a generation into citizens, jurors, legislators, militiamen and volunteers, vestrymen and congregation-members, entrepreneurs, and self-actualized persons — the whole Anglosphere toolkit — all in a deliberate manner that the British never thought they would need, but now might do well to look at.

“Americans have in many ways been congratulating themselves for the wrong things. The truths of the Declaration were hardly novel or shocking to the Englishmen who read them; rather, they saw them as a Whig five-finger exercise that had been boilerplate since 1688. What was shocking was that the Americans were throwing their own ideals back in their face.”

The award recognizes Lotus’ work on the concept of the Anglosphere, and his related work on “America 3.0”, authored in collaboration with James C. Bennett, forthcoming from Encounter Books, New York, and his contributions to the growing network of anglosphere scholars and entrepreneurs. Explorers Foundation values the anglosphere as a source of concepts and practices of use to productive people of every race, culture, and nation.

Powerline today has an analysis of the USA as if it were a firm applying for funds from Kleiner, Perkins. The presentation has a number of slides, some of which I will reproduce here. The link to the full presentation doesn’t work, unfortunately.

[Jonathan adds: Click on the large charts to display them at full size.] 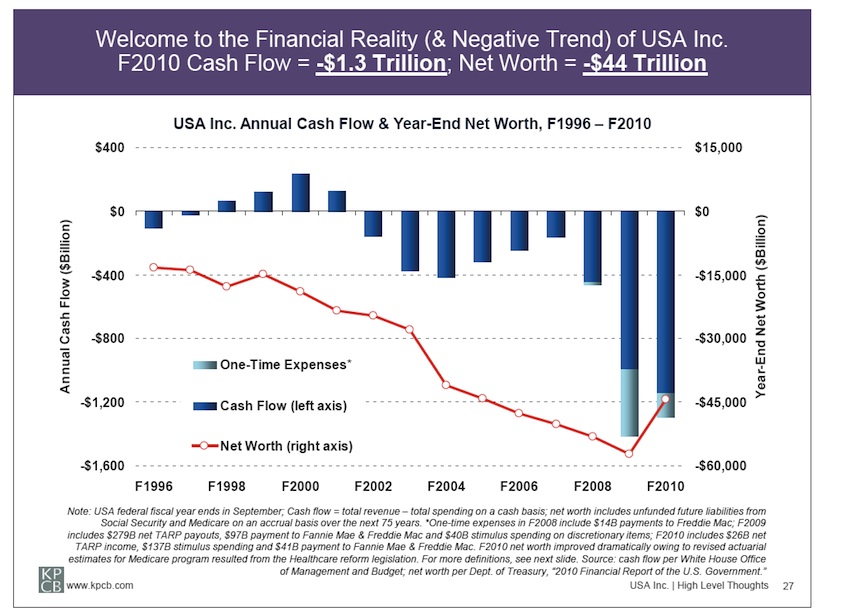 The net worth of the US is on the right side scale. The trend is pretty obvious. The small improvement is probably a sign of some recovery in the past year. 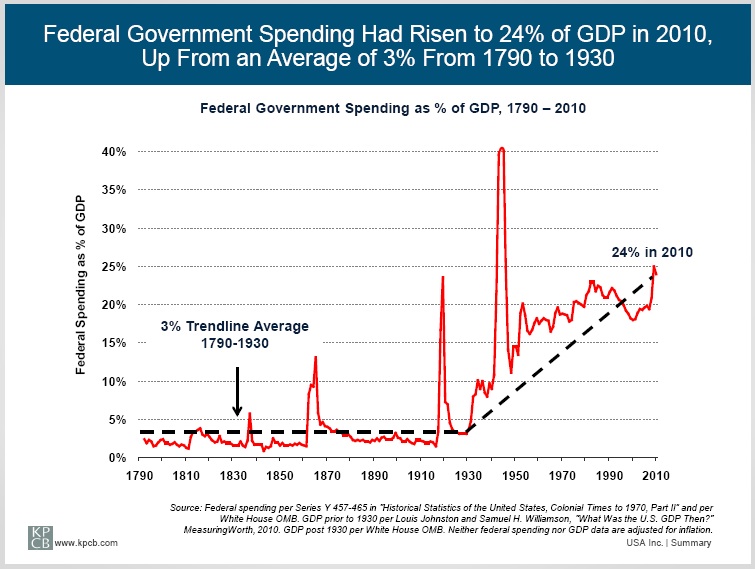 Spending has followed historical events, such as World War II. The trend, however, is not good. After 1930, spending on entitlements began and has grown out of control. 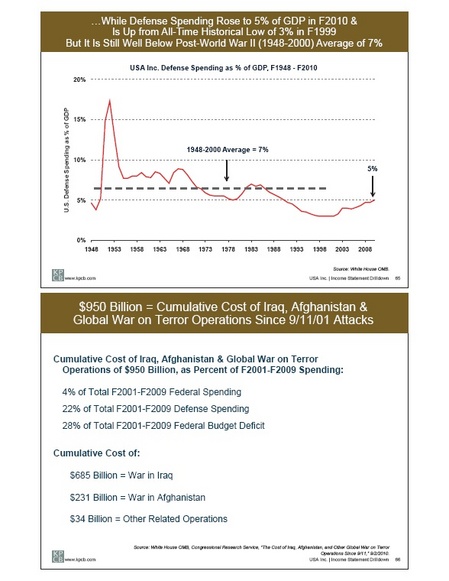 Taxes have followed a steady trend line until Obama was elected. The sharp rise has not helped as costs far outstrip revenue. 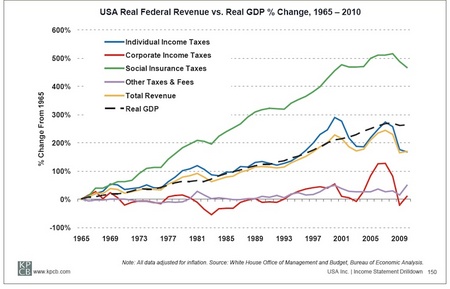 What, then, is the problem ? 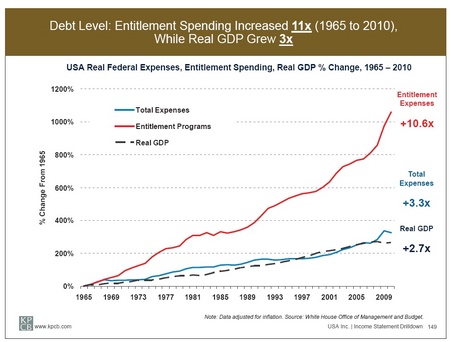 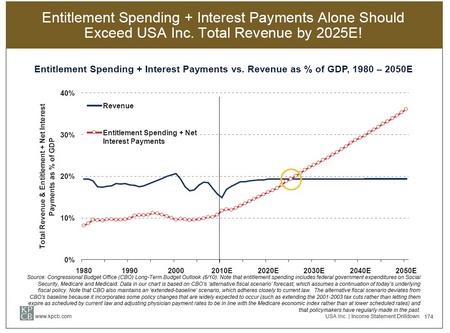 Entitlements plus interest alone will exceed revenue by 2027. That’s 16 years from now.

The left wants to raise taxes. 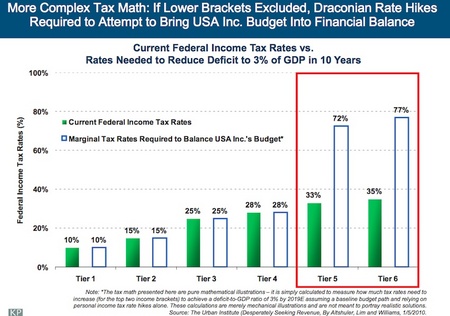 How high must tax brackets go ?

How do we compare to other countries ? 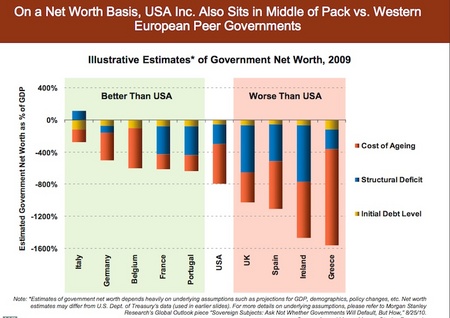 Better than some and not so good as others.

Can the left stop denying reality and start to discuss it?

Here is the response I got:

I am certain that not everyone here is as stupid as I am.

I try very hard to keep factual information from you. To wit, here is some bad analysis of our fiscal situation.

Of course, I could be wrong and I’m not this dumb. But probably not.

[fixed it for you. If you’re not even going to acknowledge our good faith attempts to allow you to comment while simply requiring that you not insinuate everyone’s stupidity then we can only assume you don’t mind the same treatment in return – mod.

They constantly use fake versions of my signature, which of course the moderators could stop. It fits their pattern. Modifying my comments is also standard and they actually think this is clever.

No, I am not optimistic.

I first saw the news of Sarah Palin planning to visit India “tweeted” at an Indian think tank website – the Takshashila Institution.

AMERICA’S MACROSTRATEGIC environment is chockablock with assets unavailable to any other country. If nothing else, the United States has an often-overlooked and oft-neglected bulwark of allies: the Anglosphere. This is Washington’s inner circle of defense ties, and it finds no equivalent in its competitor nations’ strategic arsenals. The Anglosphere is perennially—and incorrectly—declared dead or in decline by the media and politicians. Nevertheless, Great Britain, Canada, Australia and the United States remain extremely close in their military and intelligence relations and exchange vast volumes of sensitive information daily, as they have for decades. On terrorism, virtually anything and everything is shared. The National Security Agency and Britain’s Government Communications Headquarters have been nearly inextricable since World War II. The same is largely true of the CIA and Britain’s Secret Intelligence Service. The various English-speaking nations, in practical terms, even assign individual parts of the world to each other, and each worries about the others’ security equities.

The Indian Question dominated a fascinating conference on the Anglosphere in Winchester yesterday, co-hosted by two of the greatest conservative editors on the planet: Daniel Johnson of Prospect, and Roger Kimball of The New Criterion. Some of the cleverest and most contrarian men in the US, Canada, Australia, New Zealand and India were present.

James Bennett, who more or less invented the Anglosphere, saw India as the key. While it might be awkward to talk of a nation of 1.3 billion people “joining” a club of 400 million, the orientation of India would determine the relative power of the English-speaking democracies for the rest of the century.

There has been a fair amount of negative press recently for Team India because of the Commonwealth Games. Kashmir is everywhere in the news, too. We shall see.

Update: I am using “Team India” in the way that the press often refers to the “Team India versus Team China” rivalry. Personally, I’m a little more worried about Team America’s recent play. I’m sure we’ll right it eventually. I firmly believe that.