On Okinawa, Mount Yuza is captured by the US 381st Infantry Regiment. Fighting continues on the south of the island.

At sea, the Japanese air offensive against American ships slackens, but the Japanese still sink 1 destroyer and damage 1 escort carrier.

The destroyer, the USS Twiggs, was struck close to shore at twilight on bombardment duty by a low level torpedo plane. Her crew had 188 survivors with 126 men lost, dead and missing, including her captain.

On Okinawa, reinforced American units advance in the Kuishi Ridge area which has been stubbornly defended by forces of the Japanese 32nd Army.

Along the line of the US 24th Corps, the last Japanese defensive line is broken. The US 7th Division completes the capture of Hills 153 and 115. 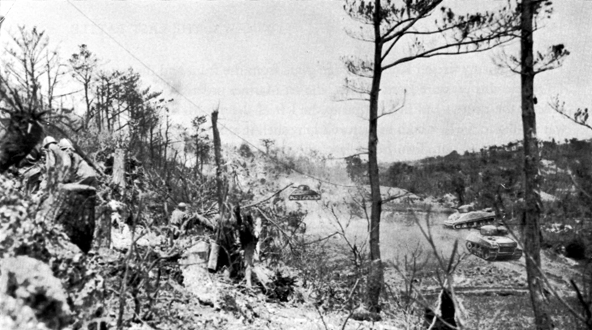 YUZA PEAK, under attack by the 382d Infantry, 96th Division. Tanks are working on the caves and tunnel system at base ridge of ridge.

The commander of the Japanese naval base on Okinawa, Admiral Minoru Ota, is found dead, having committed suicide.

On Okinawa, the remnants of the Japanese 32nd Army continue to offer determined resistance to attacks of the US 3rd Amphibious Corps and the US 24th Corps.

Lt. General Simon Bolivar Buckner, commanding US 10th Army, is killed by Japanese artillery fire while he is on a visit to the front line, inspecting troops of the US 8th Marine Regiment.

The final battles on Okinawa saw American soldiers and Marines using tanks and armored flame throwers a small distance ahead of the infantry. The infantry killed any approaching Japanese suicide anti-tank squads and the tanks engaged Japanese cave openings to kill or suppress Japanese infantry for flame thrower tanks and infantry so that they could get close enough to kill or entomb the Japanese.

The Marines histories referred to this as “Processing” the Japanese.

These tactics started to take on a momentum with the exhaustion of Japanese mines and ammunition for crew served heavy weapons.

That didn’t mean the Japanese could not kill if you got careless, as General Buckner’s death proved, but the collapse of organized Japanese resistance was in sight.

In the middle of this, the US Army’s 7th Infantry division was given three to five each 57mm and 75mm recoilless rifles. These weapons were the latest technical advance by US Army Ordnance and they made a great impression on American ground troops using them. The following is from Chapter II-10, VICTORY AND OCCUPATION, the official history of the USMC in WW2.

Nearly two weeks of punishing and brutal fighting were to ensue before the two army divisions could eliminate all enemy resistance in this Thirty-second Army defense sector. (See Map IX, Map Section.) XXIV Corps units spent the period 4-8 June in regrouping and attempting to gain favorable jump-off positions for the attack on the escarpment on the 9th. All supporting arms were employed to soften the well-organized enemy defense system. Armored flamethrower, tank, assault gun, and artillery fires were added to the point-blank blasts of experimental 57mm and 75mm recoilless rifles74 in an effort to reduce the natural bastion.
.
and
.
74. These newly developed weapons had been sent to Okinawa in late May by the War Department for test firing under combat conditions. After the limited supply of ammunition accompanying the weapons had been expended, air shipments of the special ammunition were rushed to the island in time for employment by XXIV Corps units at the escarpment. Field commanders who had the opportunity to use these weapons were unanimous in their praise and recommended that the recoilless rifle be adopted as a standard infantry weapon. According to the former commander of the 7th Marines, these weapons “. . . could have been used to great advantage by the 7th in its seizure and processing of Kunishi ridge. They were asked for but the reply came back [that] all their ammunition had been used up.” Snedeker ltr 1965.

This is from the USMC history monograph OKINAWA: Victory in the Pacific. It provides a wider context for the use of the recoiless rifle on Okinawa:

The entire 711th Tank Battalion moved into the 7th Division’s front lines on 10 June as the 17th and 32d Infantry renewed their attack. Under cover of tank guns on the landward side and NGF from the sea, 1/32 made a slow but steady advance onto the eastern slopes of Hill 95, while 2/32 moved through Gushichan toward Hanagusuku as its left flank was gradually uncovered. Armored flame throwers were brought up to burn the enemy out of the jagged coral outcroppings that crowded the crest and sides of the ridge. The 17th Infantry’s forward progress during the day’s attack was limited as the 3d Battalion strengthened its tenuous hold on the escarpment and 1/17 blasted the southeastern face of Yaeju Dake from its positions near Tomui. The division for the first time since the rainy season began was able to employ the full power of its supporting weapons.
.
Tanks and artillery also played an important part in the 96th Division’s 700-yard advance on 10 June. A constant drumfire of shells exploded on and against the escarpment, seeking out enemy guns and reserve assembly areas. Under cover of the supporting fire the four assault battalions attempted to cross the open areas at the foot of the slope. In the 383d Infantry zone the 1st and 3d Battalions were able to secure the railroad track that led from Itoman to Iwa before their advance was stopped. Enemy machine guns firing from Yuza Dake and a hill near Yuza just within the 1st Marine Division sector raked both battalions with murderous fire and forced them to dig in. The combined fire of tanks, assault guns, artillery, and experimental 57mm and 75mm recoilless rifles150 was insufficient to silence the enemy opposition, and the 383d was forced to dig in just south of the rail line.
.
and
.
150. The War Department sent teams of ordnance men to Okinawa to test the combat utility of recoilless rifles. Demonstration firing against enemy caves and pillboxes were conducted late in May, and after air shipments renewed the extremely limited ammunition supply the new weapons were used by both the 7th and 96th Divisions against the Yaeju Dake-Yuza Dake Escarpment. The destructive power, accuracy, and portability of the recoilless rifles impressed unit commanders who had the opportunity to use them in action and led to recommendations by both divisions that they be adopted as standard infantry weapons.

The US Army’s Sphinx Project and combat tests in Okinawa, Germany, and Luzon had convinced the US Army to:

as a part of the “R-table” infantry divisions it intended to field for the invasion of Japan.

The weapons and the men for these organizational changes were to be provided to MacArthur between Okinawa and the Operation Olympic.

Not all units in the landings would get the recoilless rifles — the USMC “G-table” division organization it intended to use for Olympic didn’t have any of these weapons. Nor was it likely that all 6th Army infantry regiments would be reorganized by the time of the landings. However, it is certain that the useless for fighting cave fortifications 57mm anti-tank guns would be left behind in favor of more infantry with bazooka’s and flame throwers if the recoiless rifles were not available.