I ran across more data on the priority shipping CDL Tanks and deploying Recoilless Rifles for Okinawa that made some of the things I posted my here factually wrong. There was also additional information of the “VT” proximity fuse in US Army artillery.

Taken together, what didn’t make it to Okinawa would amount to a technological surprise for the Japanese defending the beaches of Kyushu, had the A-bomb failed to get a surrender.

The M3 CDL tanks were assembled at Rock Island Arsenal. Instead of a main gun turret the tank chassis mounted a steel box containing a 13 million candle power carbon arc lamp backed by mirrors to focus the beam, a machine gun and fake cannon. A 10Kw generator was mounted on the back and run by a power take off from the engine. The 75mm sponson gun was retained. Some 500 M3 CDLs were produced in 1943-44. Some 300 entered US Army service with a few used during the battle for the Ludendorff Bridge at Remagen, Germany. Eighteen CDL arrived on Okinawa in June 1945 after the fighting ended

First, it turns out that the June 1945 arrival of the M3 Grant medium tank based “Canal Defense Light” (CDL) tanks was not based on a April 1945 emergency request during Okinawa fighting like the Pershing, but instead was due to a trip by a US Army Ordnance officer working for 10th Army to Washington DC months earlier.
See below:

What of New Weapons?

Colonel Daniels thought good use could be made of Canal Defense Light tanks. The Japanese in their campaign in Malaya had successfully made end runs at night along the coast, landing tanks from boats, and could be expected to do the same thing along the coast of Okinawa. Against such attacks, the CDL’s with their blinding searchlights might be used to very good effect. General Buckner had never heard of the CDL’s but after having been furnished a description he gave Daniels permission for a flight to Washington to round up a company. When Daniels got to Washington, he found that all of these special tanks had gone to England for shipment to France, but that he might expect some in several months. Accordingly, he put in a request for about 18 or 20 CDL’s, and an officer and men trained in operating them. They did not arrive until late June 1945, after the Okinawa campaign was over.25
.
25. Ltr, Brig Gen Robert W. Daniels to Lida Mayo, 23 Nov 63, OCMH. When the CDL’s arrived Daniels got one ashore and showed it to Gen. Joseph W. Stilwell, who had succeeded Buckner as Commanding General of Tenth Army. Stilwell was impressed. Ibid.

Second, the same section in ON BEACHHEAD AND BATTLEFRONT also provided more information on the recoiless rifiles used in the Okinawa campaign. It gives a lower number of recoilless rifles in Okinawa than I remember reading and it provides numbers for how many went to Europe versus Okinawa.

Not only on tanks and artillery but on new items such as the 57-mm. and 75-mm. recoilless rifles and VT fuzes, Europe had priority. In March 1945 the Ordnance Department sent fifty of each caliber recoilless rifle to Europe, with ammunition and instructors, for special operational use. The best Tenth Army Ordnance could do was to obtain a promise that a demonstration team would be sent to Okinawa after the invasion. The team arrived with two recoilless rifles of each type on 19 May 1945. In late April a team arrived to demonstrate the use of VT fuzes in ground combat (first used in this manner in the Ardennes), one of several teams sent to the Pacific that spring. Neither the recoilless rifle nor the VT fuze had any real effect on the outcome of the Okinawa campaign.(26)
.
and
.
26. (1) Col. Rene R. Studler, “Recoilless Rifles,” Army Ordnance , XXIX, no. 152 (September-October 1941), p. 233. (2) Rpt Ord Officer Tenth Army, Annex E, pp. 7-8; Annex C, p. 14. (3) Combat Analysis Sec, Opns Div, WDGS, Extracts from Operations Reports on Reduction of Japanese Cave-type Fortifications, Part II, 1 Jun 45, p. 2. (4) Memo, Col Rene R. Studler for Chief Research and Development Service, OCO, 16 Jun 45. Last two in Folder, Cave Warfare, Barnes File, OHF. (5) For difficulties with the VT fuze see Ordnance Periodic Summaries, Tenth Army, 29 Apr- 10 Jun 45, Folder, 0-765-8, POA, 29 Apr 45, OHF.</ 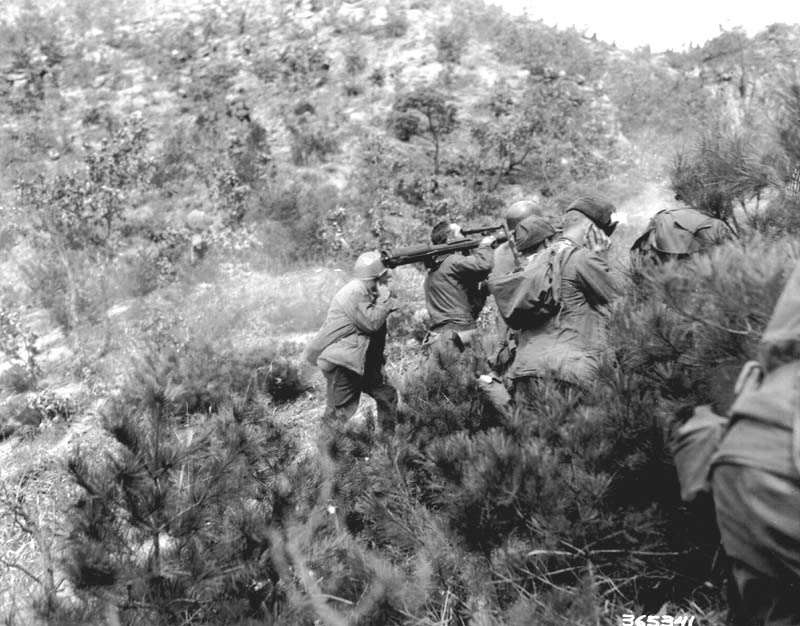 I also found this link at Ask.com on M18 57mm Recoilless Rifles that had the following information:

In late 1944, the T15 was redesignated the M18 57-mm Recoilless. The cannon and 57-mm ammunition were placed in mass production. Four types of ammunition were initially produced: an antitank HEAT round, an HE round, a smoke shell using white phosphorus, and a training round.[6][7] By early 1945, over 2,000 M18 recoilless rifles and 800,000 rounds of ammunition were on order.[8]
.
The first production M18 57-mm cannons and ammunition were rushed from the factories to the European and Pacific war theaters. The first combat the new cannon saw was with the U.S. Army’s 17th Airborne Division near Essen, Germany. While impressed with the fire power available in a lightweight weapon with the HE round, the M18’s 57mm HEAT round was a disappointment with only 63.5mm of penetration,[9] compared with the older M1A1 Bazooka which had a penetration of nearly 120mm.[10][11] The reason for the disappointing penetration by the M18’s 57-mm HEAT round was the problem any HEAT round will have if it is fired from a cannon that uses rifling to stabilize the projectile after it leaves the muzzle. Spinning degrades the penetration of HEAT rounds.[12]
.
In the Pacific Theater, the new lightweight 57mm cannon was an absolute success as “pocket artillery” for the soldiers of U.S. Army infantry units that were issued the M18. It was first used in the Pacific Theater during the Battle of Okinawa on June 9, 1945, and proved with its HE and WP rounds it was the perfect weapon for the hard fighting that took place against the dug-in apanese in the hills of that island. The only complaint the U.S. Army had was the lack of sufficient 57-mm ammunition for the M18.[13]

M20 75-mm. Recoilless Rifle in Action during the Korean War

Based on the above Ask.com numbers, it looks highly likely the Recoilless Rifle Teams were going to happen for a significant portion, if not all, of the Operation Olympic US Army assault divisions.

Last, the US Navy used the VT fuse extensively to shoot down Japanese airplanes, and the US Army used it for attacking ground targets starting during the “Battle of the Bulge” in Belgium during December 1944. I was unaware until I found this passage that they were not used on Okinawa to shoot at Japanese ground troops. The straight forward implication of that is that the effectiveness of American artillery for the Kyushu landings in Nov/Dec 1945 was going to go up radically whenever the Japanese came out into the open.

And the Japanese would have come into the open for their planned night time counter attacks on American beach heads and also to destroy American tanks with suicide anti-tank squads. Especially since their primary anti-tank gun, the 47mm, could not penetrate the front or sides of US M26 Pershing tank. (The story of the botched deployment of the M26 Pershing to Okinawa is the subject of another post in this series.)