I am a big supporter of nuclear power but have written numerous posts on the financial, regulatory and legal issues that make the “nuclear renaissance” in the United States an illusion that could be deflated by the simplest of journalistic research.

One issue that I have touched on is “contagion” which basically means that the entire nuclear industry can be sent into a deep freeze by a single event hitting any nuclear plant anywhere around the globe. Mention “Three Mile Island” (which effectively halted new reactor construction in the US) or “Chernobyl” (which put a bullet in most reactors in the Western world) and you can see how a single event can dramatically impact the entire industry. 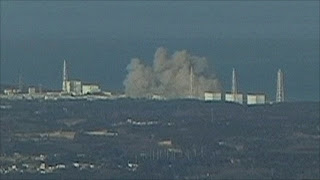 With this single photo that I got from the BBC site here (I usually don’t put up other people’s photos but in this case the image will soon be so iconic I think it was appropriate) now you can see the end of the Nuclear Renaissance in the United States.

That photo or some variant will be everywhere… the risk of a catastrophic event at a nuclear plant (even though the Japanese seem to be handling it well so far, all things considered) will be played up continuously, which will be more fodder for protests and will make financial executives think that much harder before committing all their company’s capital to such an uncertain venture as building a nuclear plant in the litigious USA.

The inflection point of a major event is rarely so obvious as this. I guess the real issue is whether this is even an inflection point anyways, since nuclear activity in terms of new construction in the US was confined to a couple of units in Georgia, a couple in Texas, and one in South Carolina anyways. We’d be lucky if out of these 5 units even 3 saw the light of day and were commissioned (remember that even if built protesters can shut it down – see what happened to Shoreham in Long Island). As for new ones beyond these, it goes from unlikely to remote.

All natural gas from here on out.

Update – It only took a few minutes for the French “Greens” (I don’t know how they are against nuclear power and call themselves green but they are all really against any progress whatsoever) have already started their calls to end nuclear power – find it here and wait for a million more just like it.

25 thoughts on “The End of the Nuclear “Renaissance” is Now”