Another Texas author recently put a question up on one of those interminable LinkedIn author discussion forums; which, of all the years in the 19th century was the most exciting, the most pivotal, the year where everything happened, the most significant when it came to what America was and what it would be. There’s a case to be made and argued for at least a dozen or more, but I put up an argument for 1876. That was that Centennial year; the United (and occasionally dis-united) States observed a hundred years of existence. American citizens looked back on a hundred years and were generally pleased and satisfied with what had been accomplished; an independent country, a democratic republic, based on the active participation of engaged and responsible citizens; no hereditary ruling class, no established nobility or royalty, just a from-the-bottom-up administration drawn from the local and state level, feeding into a relatively restrained federal establishment! And it had managed to last a hundred years! It had succeeded politically, militarily, socially, and technologically, establishing dominion over a large swath of the American continent, from sea to shining sea. Much of the evidence of this was on proud display at the Centennial Exposition in Philadelphia, America’s very first World’s Fair. It is estimated that visitors to the Exposition amounted to about a fifth of the U.S. population of the time. One exhibit, of an authentic colonial period kitchen, kicked off an enthusiasm for architecture and interior decorating in what had then been an archaic style.

1876 was also a miraculous year for Texas ranchers and citizens; the Comanche and Kiowa tribes, whose raids into Texas for loot, captives and horses had scourged Texans from the earliest days, had finally been decisively defeated at the Palo Duro Canyon two years previously by Colonel Ranald McKenzie, who raided into the Comanche camps there. He destroyed their stores and more importantly, their horse herds. As cruel as this action appears; it was no crueler than the results of Comanche war parties raiding into Texas and Mexico for decades. In 1876, with the last ragged and starving survivors surrendering to life on a reservation in the Indian Territories of Oklahoma, the plains above the Hill Country were finally safe for settlement, for ranching, farming, and commerce generally. One cannot stress how much this was a relief to those settlers who had been on the receiving end of Comanche depredations. Contemporary Texans found very little sympathy in their hearts for the Comanche, after having seen loved ones kidnapped, tortured, and slaughtered by Comanche war parties. The historian T.R. Fehrenbach theorized that the peculiar character of Texas, in comparison to other states, came about because of the unrelenting state of war with the Comanche which had continued for fifty years – rain, shine, summer, winter and with nearly three generations of settlers. The last portion of Texas to be settled – the Panhandle region, and that part north of the Hill Country – was soon checkered with ranches, farms and growing towns, all stitched together by the railway. And that was another cause for wonder; the ease and rapidity of transportation. A journey which once took a whole day in a wagon, or on horseback, could now be accomplished in the space of an hour.

I stretched a little of that miraculous Centennial year into the year following, as 1877 was also the year that San Antonio was finally connected by railway ties to the rest of Texas and the greater U.S. – the very last major city left un-served by a railway. The change which the railway brought to San Antonio is most evident in comparing a pair of birds-eye view city maps of San Antonio; the first by Augustus Koch from 1873; a tight cluster of buildings around Main and Military Plazas, along a couple of blocks of Soledad and Flores Streets, and the length of Commerce Street between the Alamo and Main Plazas. All the rest of town is a scattering of small houses scattered among gardens, small pastures and orchards of trees. When Koch returned to the city in 1886 for another birds-eye map, the railway had arrived. The Army had removed from the crumbling remains of the old Alamo complex to a new establishment, Fort Sam Houston, on the uplands to the north. Many of the open spaces in the 1873 map had been filled in by taller and more modern structures. The railway revived what had been previously a sleepy and remote backwater, served by stages and freight wagons. Within another year or so, San Antonio had the beginnings of a trolley-car system, a vast city park around San Pedro Springs, the headwaters of the San Antonio River. All the trappings of modern life had arrived, although in somewhat embryonic form. From then on, the frontier would close, slowly and irrevocably, and although the ‘wild west’ would remain wild in parts for at least another quarter-century. 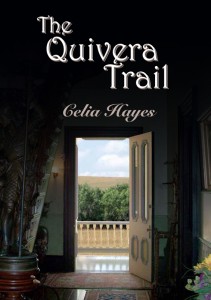 My latest novel, The Quivera Trail is set in those two years – not that I started out intentionally to plan it that way; it was just something which worked out that way, moving from England in late 1875, to the Panhandle and the surge of settlement after the end of the Indian Wars, and to San Antonio when the railway finally arrived. I’ve described it as ‘Mrs. Gaskell meets Zane Grey’, since it tells the story of two young Englishwomen daring to build and live new lives for themselves in a country very different from the one they came from. The Quivera Trail will be on Amazon next month, in both paperback and in Kindle. And if any Chicagoboyz are going to be in Texas in November, I’ll have a booth at the Boerne Market Days (second weekend of the month) and at the Weihnachtsmarkt in New Braunfels on November 22-23.

3 thoughts on “The Year of Wonder and Miracles”