Adrift without a map, we are, in the sea of current events. Especially after this last week, which brought us a ground war in Gaza and the shoot-down of a passenger airliner over Ukraine; both situations a little out of the depth of the past experience of Chicago community organizer, even one who spent his grade school years in Indonesia. Quite a large number of the blogs and commenters that I follow have speculated over the last couple of months – at least since last year – and have predicted disaster. They know not the day nor the hour, but they have read the various augurs according to their inclinations, suspicions and particular expertise, and gloomily speculate on the odds of various events occurring. There is something bad coming, the air is thick and heavy with signs and portents, never mind the cheery cast that the current administration and its public affairs division attempts to put on it. It’s like a makeup artist, plying the art on a six-months-dead corpse; it’s just not working.

Jack Hays holds an outsized place in the history of the Texas Rangers, who began as a sort of heavily-armed and mounted Neighborhood Watch, metamorphosed into frontier protection force, and only much, much later into a law-enforcement body. But he was one of the earliest Ranger commanders; a surveyor by profession, born in Tennessee and raised in Mississippi, who would live to a ripe old age as a politician and lawman in California. Quiet, modest, self-effacing, Jack Hays became the very beau ideal of a captain of Rangers. He came to Texas at the very end of the fight for independence from Mexico in 1836, and worked as a surveyor and alternately as a soldier volunteer. He had been among the Texans in the Plum Creek fight, but made his name in the decade afterwards, astounding people who knew only his reputation upon meeting him for the first time. He was slight, short and refined in appearance and manner, and looked about fourteen years old. But he was also a gifted leader of irregular fighters and possessed an iron constitution. His fearlessness and daring became a byword among his fellow Rangers and his Tonkawa Indian allies and scouts. Chief Placido of the Tonkawa exclaimed admiringly, “Me and Red Wing not afraid to go to hell together. Captain Jack heap brave; not afraid to go to hell by himself.” The Texas historian T.H. Fehrenbach noted, “He mauled Indians from the Nueces to the Llano, and never with more than fifty men.”

Once there was a little town, a little oasis of civilization – as the early 20th century understood the term – in the deserts of New Mexico, a bare three miles from the international boarder. The town was named for Christopher Columbus – the nearest big town on the American side of the border with Mexico was the county seat of Deming, thirty miles or so to the north; half a day’s journey on horseback or in a Model T automobile in the desert country of the Southwest. It’s a mixed community of Anglo and Mexicans, some of whose families have been there nearly forever as the far West goes, eking out a living as ranchers and traders, never more than a population of about fifteen hundred. There’s a train station, a schoolhouse, a couple of general stores, a drug-store, some nice houses for the better-off Anglo residents, and a local newspaper – the Columbus Courier, where there is even a telephone switchboard. Although better than a decade and a half into the twentieth century, in most ways Columbus looks back to the late 19th century, to the frontier, when men went armed as a matter of course. Although the Indian wars are thirty years over – no need to fear raids from Mimbreno and Jicarilla Apache, from the fearsome Geronimo, from Comanche and Kiowa – the Mexican and Anglo living in this place have long and bitter memories.

(From the archives of the Daily Brief – a meditation on living in the borderlands. Business is suddenly jumping for the Tiny Publishing Bidness, and I suddenly have a lot of editing to do and a short time to do it in. I honestly don’t have anything else to say about the debate last night that the other guyz haven’t already said.) 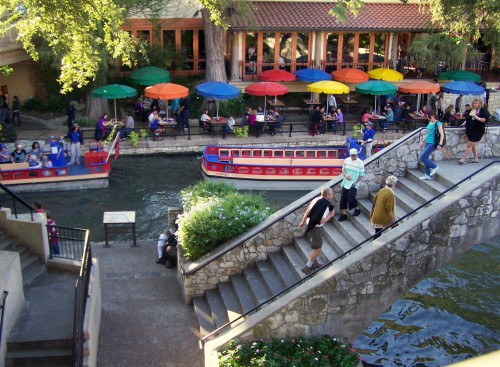 It’s part of the tourist attraction for San Antonio, besides the Riverwalk and the Alamo. Even though this part of South Texas is still a good few hours drive from the actual physical border between Mexico and the United States, the River City is still closer to it than most of the rest of the continental states. It falls well within that ambiguous and fluid zone where people on both sides of it have shifted back and forth so many times that it would be hard to pin down a consistent attitude about it all. This is a place where a fourth or fifth-generation descendent of German Hill-Country immigrants may speak perfectly colloquial Spanish and collect Diego Riviera paintings…. And the grandson of a semi-literate Mexican handyman who came here in the early 1920ies looking for a bit of a break from the unrest south of the border, may have a doctoral degree and a fine series of fine academic initials after his name. And the fact that the original settlers of Hispanic San Antonio were from the Canary Islands, and all non-Hispanic whites are usually referred to as “Anglos”, no matter what their ethnic origin might be, just adds a certain surreality to the whole place.