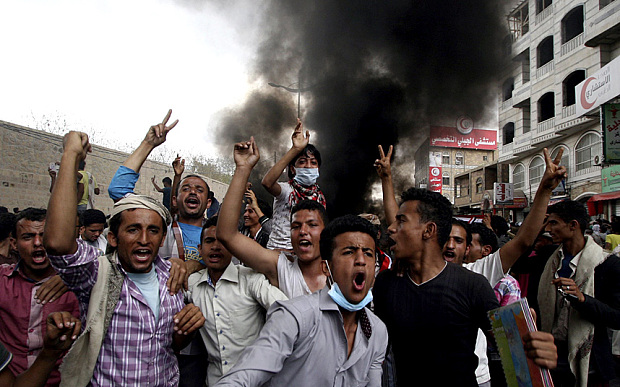 It looks like the battle for Saudi Arabia has begun and, if it follows the pattern of other Obama wars, it will be soon lost, or so Richard Fernandez believes.

Even the New York Times sees it.

President Abed Rabbo Mansour Hadi fled Yemen by sea Wednesday as Shiite rebels and their allies moved on his last refuge in the south, captured its airport and put a bounty on his head, officials said.

The departure of the close U.S. ally and the imminent fall of the southern port of Aden pushed Yemen further toward a violent collapse. It also threatened to turn the impoverished but strategic country into another proxy battle between the Middle East’s Sunni powers and Shiite-led Iran.

Saudi Arabia and its Gulf allies believe the Shiite rebels, known as Houthis, are tools for Iran to seize control of Yemen and say they intend to stop the takeover. The Houthis deny they are backed by Iran.

The stakes are very high for Europe, especially.

The Telegraph, as usual a better source of news than US newspapers, says Saudi Arabia is moving heavy military equipment including artillery to areas near its border with Yemen, US officials said on Tuesday, raising the risk that the Middle East’s top oil power will be drawn into the worsening Yemeni conflict.

The question is whether the Saudis will fall to their own Shiite population and whether the capture of Aden will allow Iran to block Saudi oil shipments.

“Once hailed by President Barack Obama as a model for fighting extremism, the U.S. counterterrorism strategy in Yemen has all but collapsed as the country descends into chaos, according to U.S. and Yemeni officials.”

“It is the model that we’re going to have to work with, because the alternative would be massive U.S. deployments in perpetuity, which would create its own blowback and cause probably more problems than it would potentially solve,” Obama said in January as the situation in Yemen deteriorated.

Now, virtually all of the Yemeni troops that had worked with the U.S. are engaged on one side or another of a three-pronged political struggle between the remnants of the Hadi government, supporters of former President Ali Abdullah Saleh, and the Houthi faction, U.S. officials say. The officials insisted on anonymity because they were not authorized to speak by name about sensitive intelligence assessments.

Yemen is lost. Will Saudi be next ? 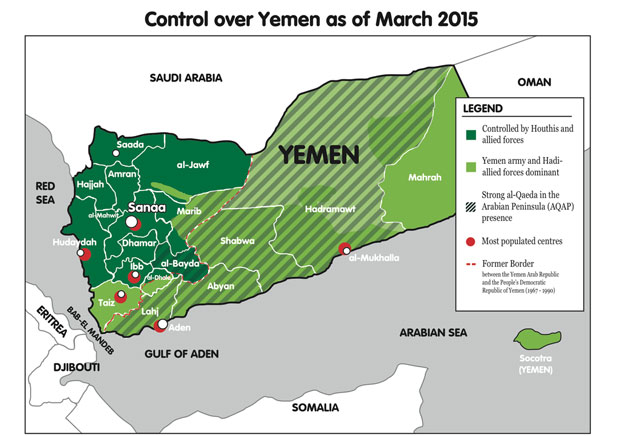 The straits at Aden are a choke point for the Gulf.

The former diplomat said Iran hoped to establish a new base of operations in Yemen similar to its de facto outpost in southern Lebanon – controlled by the Shiite militant group Hezbollah.

The political, but also the economic stakes are huge.

“What’s most important is that this new base would be located in the Bab al-Mandeb strait, where between 70 and 80 percent of the world oil trade passes. So, with the Strait of Hormuz, Iran would control two straits, obligating the world to treat it as a business partner,” Gauthier added.

Here is the fruit of Obama’s feckless policy in Iraq and his flirtation with Iran.

Security is a concern at Bab al Mandab, which stands, along with the Suez Canal and the Strait of Hormuz, as one of the world’s major oil-supply choke points. Yemen’s national security forces and its coast guard have been strained since the country’s revolution took root in 2011.

“If the Iranians are able to control Bab al Mandab and the Strait of Hormuz, they’d be able to have a chokehold on the global economy,” a Western diplomat in San’a said.

In the face of all this disaster, Obama seems to be retreating into a shell.

President Barack Obama has yet to meet with the new head of the North Atlantic Treaty Organization, and won’t see Secretary General Jens Stoltenberg this week, even though he is in Washington for three days. Stoltenberg’s office requested a meeting with Obama well in advance of the visit, but never heard anything from the White House, two sources close to the NATO chief told me.

The leaders of almost all the other 28 NATO member countries have made time for Stoltenberg since he took over the world’s largest military alliance in October. Stoltenberg, twice the prime minister of Norway, met Monday with Canadian Prime Minister Stephen Harper in Ottawa to discuss the threat of the Islamic State and the crisis in Ukraine, two issues near the top of Obama’s agenda.

Kurt Volker, who served as the U.S. permanent representative to NATO under both President George W. Bush and Obama, said the president broke a long tradition. “The Bush administration held a firm line that if the NATO secretary general came to town, he would be seen by the president … so as not to diminish his stature or authority,” he told me.

After Saudi, of course, comes the NATO Alliance or what is left of it.

America’s commitment to defend its NATO allies is its biggest treaty obligation, said Volker, adding that European security is at its most perilous moment since the Cold War. Russia has moved troops and weapons into eastern Ukraine, annexed Crimea, placed nuclear-capable missiles in striking distance of NATO allies, flown strategic-bomber mock runs in the North Atlantic, practiced attack approaches on the U.K. and Sweden, and this week threatened to aim nuclear missiles at Denmark’s warships.

“It is hard for me to believe that the president of the United States has not found the time to meet with the current secretary general of NATO given the magnitude of what this implies, and the responsibilities of his office,” Volker said.

Bernadette Meehan, a spokeswoman for the National Security Council, declined to say why Obama didn’t respond to Stoltenberg’s request. “We don’t have any meetings to announce at this time,” she told me in a statement. Sources told me that Stoltenberg was able to arrange a last-minute meeting with Defense Secretary Ashton Carter.

Now, as the conflict between Iran and Saudi Arabia moves directly to the borders of the Kingdom itself, Obama is like a deer in the headlights, incapable of any meaningful action. He’s been reduced to hoping that Tehran throws him a bone. The man who depicted himself as a transcendent figure on history’s stage, who described his foreign policy vision at the Temple of Hercules has been out-thought, out-generaled and completely outclassed by men with far fewer resources, but a great deal more ability than himself.

God help us. The Saudis are trying to rally Sunni countries but Pakistan turned them down when they asked for troops last week.

Saudi Arabia faces the risk of the turmoil spilling across its porous 1,100 mile-long border with Yemen and into its Shi’ite Eastern Province where the kingdom’s richest oil deposits lie.

Riyadh hosted top-level talks with Gulf Arab neighbors on Saturday that backed Hadi as Yemen’s legitimate president and offered “all efforts” to preserve the country’s stability.

Saudi Foreign Minister Saud al-Faisal said on Monday Arab countries would take necessary measures to protect the region against “aggression” by the Houthi movement if a peaceful solution could not be found.

All we can do is Drill, Baby, Drill and get our own energy supplies maxed out.

I don’t mean to try to hog band width but this is a crisis I believe.