I was at a very interesting meeting today, of local Democrats getting organized to reelect Obama in 2012. I sat in and mostly listened. Bottom line, they are energized, but kinda bummed about the whole rotten economy and no jobs thing. They have an impressively large number of people already committed to working hard to reelect Obama, a year and a half before the election.

One thing I am noticing is that there are already lots of Obama 2012 bumper stickers, t-shirts, and posters all over the place, with this image. While I was at the meeting I got an Obama poster and I was thinking of a way to hack it to serve our own purposes.

I am hereby requesting that someone with awesome skilz make a version of the Obama logo but changed in the following ways. (1) take out the text; (2) make the blue background red; (3) take out the current zero with the Obama logo, and replace it with a yellow circle with the Gadsen Flag Rattlesnake. Keep the white border and the same typeface so it is clearly a satire of the Obama image.

Below the fold is my scissors version to get an idea of what I mean by (3), but the zero should be yellow with a black snake and a green branch underneath, like the typical Gadsden flag.

The idea here is to create an image that is in opposition to Obama’s reelection, that draws on Tea Party imagery, and the GOP “color” but is not associated with any candidate, since we don’t have one yet. Plus, the rattlesnake is directed against not just Obama, not just the Democrats, but against go-along-to-get-along Republicans as well. The total absence of text allows it to assume a range of meanings.

I think it is important to start getting countervailing images out so that Obama and his supporters do not have all the visual space for the next year before a GOP candidate is selected.

If anyone does make this, please send us a link or an email via the blog.

UPDATE: (Please note bleg to turn this into real stuff.) 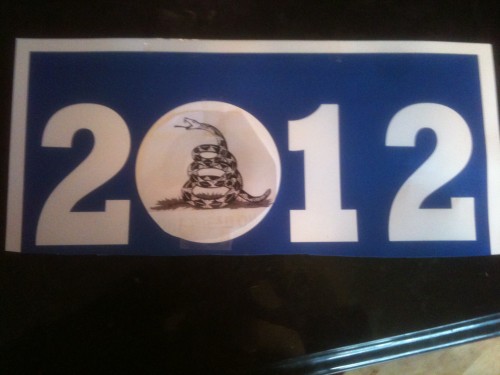