There are currently 75,772 confirmed COVID-19 cases worldwide, including 2,129 fatalities as of this morning’s time hack. China has changed how they are reporting new cases yet again (two times they admit too) again, so numbers will decrease there. Worldwide less China, there are 1150 infected, with 10 deaths (1 Taiwan, 1 Japan, 1 Philippines, 2 Diamond Princes, 2 Hong Kong, 1 France, 2 Iran). There are both some number crunching and recent coronavirus developments in this update.

Current death to recovery ratio outside Mainland China are:

Inside Mainland China’s state of Hubei, where the medical system has been overwhelmed, things got a lot worse.

As long as high quality medical care is available to those who require intensive care, mortality rates should go down as more is known about successful COVID-19 treatment. Anywhere the system is overwhelmed, as happened is in Wuhan, it will be horrid.

This update is going to be a horror show of numbers involving “super spreaders” and public health incompetence in and around the Diamond Princess cruise ship. As of this mornings’s writing time hack, there are currently 75,129 confirmed COVID-19 cases worldwide, including 2,007 fatalities. China: TOTAL 74,130 2,002 12,017 serious 13,818 recovered 6,242 suspected. (No one believed these numbers except the Who and CDC) Everywhere else: 999 cases, 5 deaths, 39 serious/critical

Next — the COVID-19 infection numbers from the Diamond Princess are horrific.

“Japan: The 542 people from the “Diamond Princess” cruise ship are listed separately and they are not included in the Japanese government’s official count. Fourteen of them are Americans whose test results came in while they were being evacuated from the ship. 246 were _asymptomatic_.”

Given 246 of 542 infected are asymptomatic…we are looking at a 45% of no-symptom super-spreader rate.

In one flight of the Diamond Princess returnees. “…the original 14 tested have become 19 due to inflight testing, or 18 pending and 1 CDC confirmed.

The flight to Travis, CA had 7, and picked up 3 inflight – all asymptomatic

The Flight to Lackland, TX had 7, and picked up 2 inflight – all but one asymptomatic

It was reported that Texas sent 6 to Omaha; however Omaha said they received 13. One requiring hospitalization but stable, and the rest asymptomatic. All are awaiting final CDC confirmation.

Of the 7 in Calif, 2 were transferred to QotV – one asymptomatic received CDC confirmation of positive today; one with mild symptoms is still awaiting CDC.

“In this effort to evacuate 126 people from Wuhan to Frankfurt, a symptom-based screening process was ineffective in detecting SARS-CoV-2 infection in 2 persons who later were found to have evidence of SARS-CoV-2 in a throat swab. We discovered that shedding of potentially infectious virus may occur in persons who have no fever and no signs or only minor signs of infection.”

I live in the world of HVAC distribution, which is basically a subset of industrial distribution. The information flow concerning COVID-19 is interesting. There are some of my vendors who are in full freak out mode, as they are already getting short on items imported from China. Some of these items are part of a larger item being put together either in Mexico or here in the States. Other items are things that my vendors simply repackage and resell. I have also heard a rumor that certain chemicals and finished copper products are going to have issues in the near future. There are some vendors that are just “shoulder shrugging” the whole thing off at this point. The reactions are all over the board from my vendors.

I imagine that we will know a lot more when the Spring AC calls start coming as most vendors typically have a 30-60 day safety supply stateside.

This could end up quite profitable for other regions of the world vs. China, and it may be business that China will never get back. Time will tell.

As of this morning’s time hack, world wide there are now 1,770 dead and 71,223 infected by COVID-19. Community spread is underway in Singapore (see chart), Taiwan and Japan. The USA thinks it might be on-going in the USA. Both Japan and the USA refuse to state this, but actions being taken argue otherwise.  Two horrid COVID-19 infection reports from Chinese news sources — the Taiwan News is reporting re-infection with COVID-19 is causing heart failure and South China Morning Post is reporting 34 and 94 day from exposure to infection super spreaders.  Recovered from COVID-19 infection Ontario couple are still testing positive for coronavirus. Finally,  COVID-19 fomit** contamination of Chinese money and survival of corona-virus in high heat & humidity are also in the update. 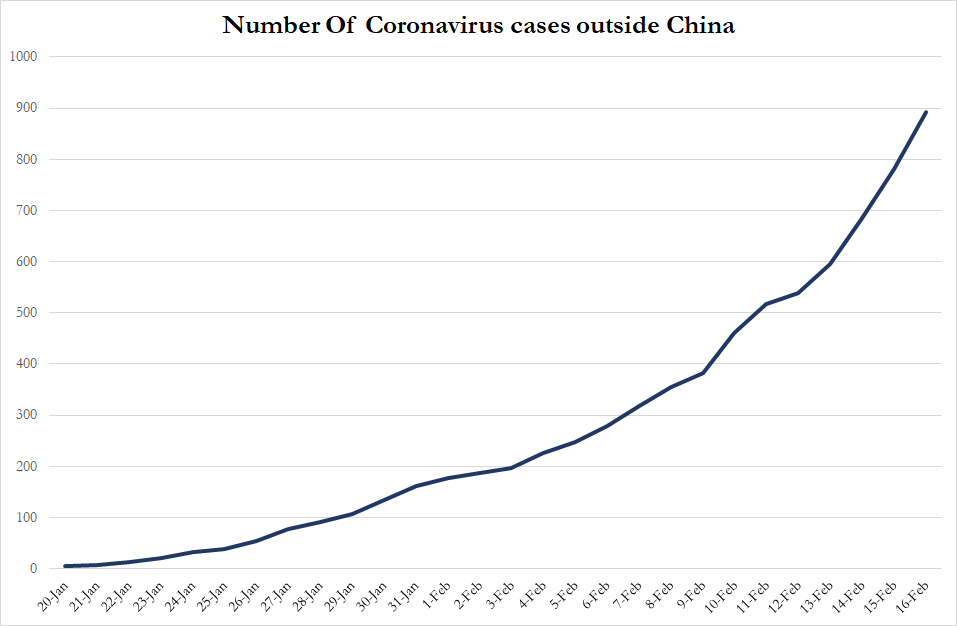 There are currently 65,213 confirmed COVID-19 cases worldwide, including 1,486 fatalities. Of which 4,823 new cases and 116 new deaths were reported in Hubei province, China.
.
There are several trends in this update, as well as the headline summary. First Community spreading of COVID-19 is now established in Hong Kong (attached graphic), Japan and Singapore.
.
Second, the shut down of China as an economic power seems near complete. See the JP Morgan coal for electricity usage and the Goldman Sachs economic projection charts attached to this post. The JP Morgan chart shows that while traditionally daily coal consumption – the primary commodity used to keep China electrified – rebounds in the days following the Lunar New Year collapse when China hibernates for one week. This is not the case this now. There hasn’t been even a modest increase, indicating that so far there hasn’t been a return to work.
.
.
Short Form — Lack of Chinese coal use/electric power generation indicates the scale of Chinese industries that are shut down…AKA near total.
.
And the “Just-In-Time/Sole-Source in China” world-wide, Multi-national corporation, economic shut down virus is gathering a huge economic momentum. Nissan has shut down auto production in addition to South Korea’s Hyundai for lack of Chinese parts. Rumor has it that Ford has the same issue — as their heater coils in their autos are sole sourced in China — and will soon shut down auto production.  Anything cheap or disposable in the world economy is sourced in China, and the Chinese economy is now off-line for the foreseeable future.
.
Third, China is again playing games with COVID-19 numbers and particularly the announced deaths to keep the death rate at 2.1%, saying deaths were “double counted”?!? (See JP Morgan graphic).
.
.
This has been ‘officially noticed’ by the White House.
.
See:
White House does not have ‘high confidence’ in China’s coronavirus information, official says
.
https://www.cnbc.com/2020/02/13/white-house-does-not-have-high-confidence-in-chinas-coronavirus-information-official-says.html
.
Fourth, American COVID-19 are now officially 15 with a case in San Antonio, Texas from a Wuhan evacuation flight and no deaths. I say “officially” as there possible COVID-19 death in Boise, ID. See:
.
https://www.ktvb.com/article/news/health/coroner-deceased-boise-man-being-tested-for-possible-coronavirus/277-53a884af-d815-464c-95f1-d35092cc6bd8
.
The possible COVID-19 victim was a 71-year-old man found dead on Feb 9 in an advanced state of decomposition. He returned from China Feb 5. The initial testing came up negative, but additional tests are being run. The cause of death has not been released.
.
An idea of what “Community spreading” in Singapore means can be seen in the following report:
.

“Singapore Casino employee confirmed with COVID-19; symptomatic Feb 5, hospitalized Feb 9
On February 13, 2020, the Central Epidemic Command Center (CECC) pointed out that the confirmed case of coronavirus disease 2019 (COVID-19) in Singapore announced on February 11 is an employee at the casino in Resorts World Sentosa Casino. The employee developed symptoms on February 5 and was hospitalized in isolation on February 9. Travelers who visited the casino during the communicable period (February 4-9) are advised to call 1922, put on a face mask and seek immediate medical attention as instructed if suspected symptoms develop within 2 weeks. Moreover, such travelers should inform the physician of any relevant travel history when seeking medical attention.”