The country is going through one of the increasingly common episodes of hysteria in modern times. In the 17th century, there was the period of The Salem Witch Trials.

From June through September of 1692, nineteen men and women, all having been convicted of witchcraft, were carted to Gallows Hill, a barren slope near Salem Village, for hanging. Another man of over eighty years was pressed to death under heavy stones for refusing to submit to a trial on witchcraft charges. Hundreds of others faced accusations of witchcraft; dozens languished in jail for months without trials until the hysteria that swept through Puritan Massachusetts subsided.

The episode was begun by what sounds like hysterical symptoms occurring in the daughter of the new minister. Before it was over, a number of people of the village of Salem had been accused of witchcraft and 19 were executed and five others had died. 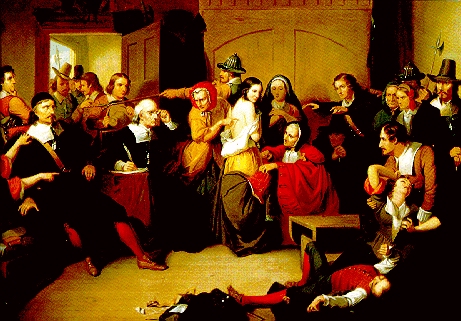 Suspected witches were examined for certain marks, called “witch marks,” where witches’ “familiars” could nurse. The hysteria ended as quickly as it began. By the end of 1692, it was over and all surviving accused were released.

The period of the hearings in America after World War II, in which many were accused of being communists, the so-called “McCarthy period,” is often compared to this era and a left wing playwright, Arthur Miller, wrote a play called “The Crucible,” which made the connection between the Salem trials and Senator McCarthy’s accusations the theme.

I have to say this about the sh*tstorm over what is being irreverently termed shirtgate – it’s the final and ultimate straw in moving me away from ever calling myself a feminist again … at least, not in mixed company. Ah, well – a pity that the term has been so debased in the last few decades. Much as the memory of very real repression and denial of rights in the persons-of-color/African-American/Black community has been diminished, overlaid, generally abused and waved like a bloody shirt by cynical operators (to the detriment of the real-life community of color/African-American/Black-whatever they wish to be called this decade), so has the very real struggle for substantive legal, economic, economic and social rights for women also been debased and trivialized. Just as the current so-called champions of civil rights seem to use the concept as an all-purpose cover for deflecting any useful discussion of the impact of welfare, the trivialization of marriage, and glorification of the thug-life-style in the persons-of-color/African-American/Black community, the professional and very loud capital F-feminists seem to prefer a theatrical gesture over any substantial discussion of the real needs and concerns – and even the careers of ordinary women. Women whom it must be said, are usually capable, confident, tough, and love the men in their lives – fathers, brothers, husbands and sons.