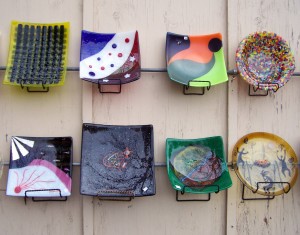 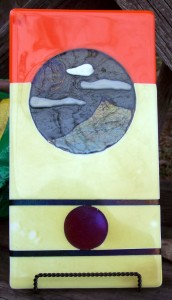 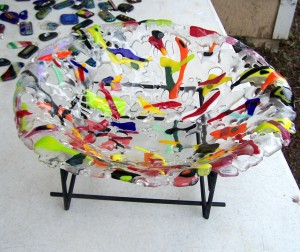 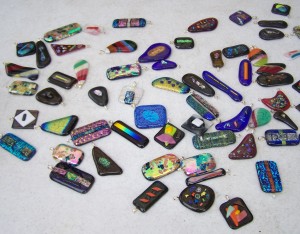 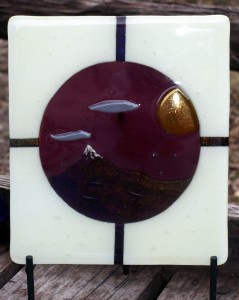 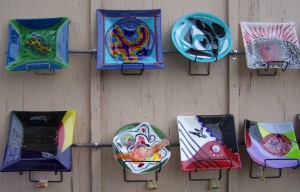 The sentiment of Mr. Charles James Napier on multicultural understanding and tolerance:

Be it so. This burning of widows is your custom; prepare the funeral pile. But my nation has also a custom. When men burn women alive we hang them, and confiscate all their property. My carpenters shall therefore erect gibbets on which to hang all concerned when the widow is consumed. Let us all act according to national customs.

The sentiment of Mr. Charles James Napier on effective government:

The best way to quiet a country is a good thrashing, followed by great kindness afterwards. Even the wildest chaps are thus tamed.

The sentiment of Mr. Charles James Napier on how to win friends and influence people:

The human mind is never better disposed to gratitude and attachment than when softened by fear.

The sentiment of Mr. Charles James Napier on colonialism:

So perverse is mankind that every nationality prefers to be misgoverned by its own people than to be well ruled by another.

The sentiment of Mr. Charles James Napier on self-improvement:

Honorable retreats are no ways inferior to brave charges, as having less fortune, more of discipline, and as much valor.

Not a sentiment of Mr. Charles James Napier regarding south Pakistani tourism: 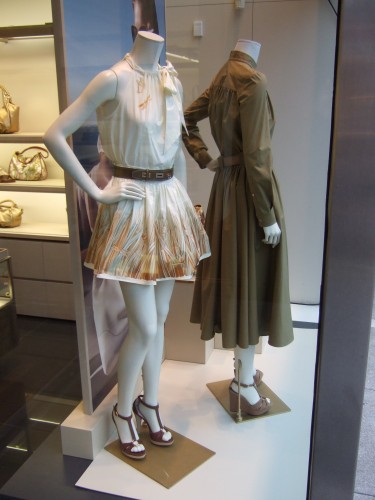 I am so happy that summer is coming. I may make the wife purchase the outfit on the left for our next date. 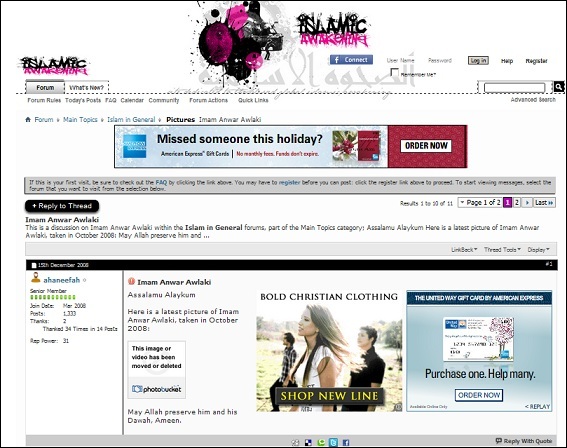 I am, admittedly, very interested in religion, and Christianity has been the mother-lode for me of the imagery, gestures and profound words that can move heart, soul, mind and imagination into a greater depth.

Advertising, on the other hand… well, let’s just say that the best of it plays on imagination, too, but it is generally more of an intrusion upon – via billboards on landscapes, via commercials in movies, or via irritating jingles and catch phrases that subvert my best attempts at quieting the mind – than an experience of the kind of depth that religion at its best can offer.

But if you are interested in religion, and click online in enough of the right places, advertising that has “religious” content will be targeted to you.

And so it is that I went online this morning to check out something about al-Awlaki on Islamic Awakening, an American jihadist forum, and found myself invited to consider, instead, wearing some “bold Christian clothing”. 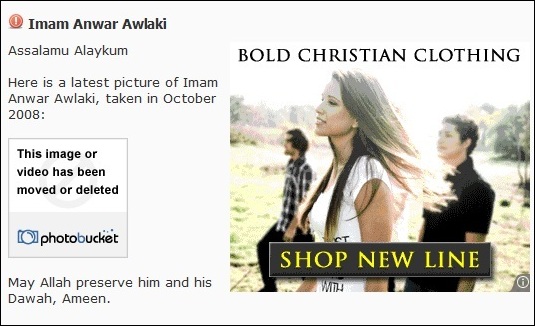 This was while I was researching al-Awlaki, right? the Muslim jihadist preacher?

a site with its own curious graphics…

And looking closer at that logo, isn’t that some sort of triumphalist armored vehicle I see?

Well, never averse to a pretty girl, and noticing the one in the Bold Christian ad, I thought I’d taker a look at Bold Christian Clothing to find out what sort of fashion sense was popular among the younger Christian set just now, and found I could obtain t-shirts with such comforting images as these… 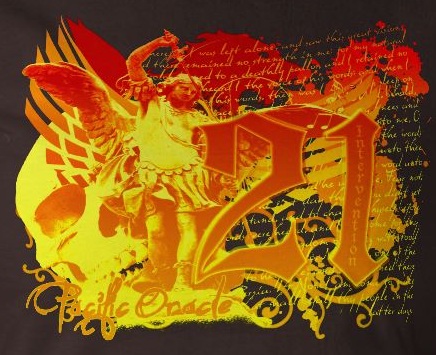 — this one’s symbolic of our relatively new century, I guess… 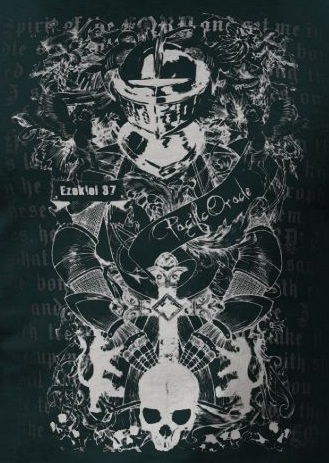 which I am praeternaturally fond of since my online moniker is hipbone, with its veiled reference to the Valley of the Dry Bones in that very same chapter 37 of Ezekiel…

and then there’s this masterfully supremacist rendering of a part of the Lord’s Prayer: 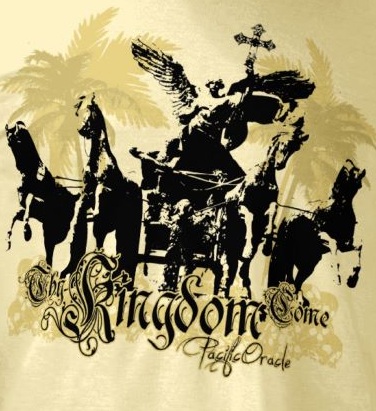 which I must admit isn’t the image of Thy Kingdom Come that springs to mind when I personally hope and pray for heaven on earth.

What exactly is it, you may ask? According to the manufacturer, it’s

The Lord’s Prayer — “Thy Kingdom Come” with an Angel holding the cross, Horses, skulls under the horses, and palm trees (with Shield and Pacific Oracle cross logo added)

It’s also “the softest, smoothest shirt we sell” … “made from combed cotton for your added comfort” and gives “a flattering and stylish fit to virtually any body type”.

I on the other hand think it looks more like a photoshopped variant of the Quadringa statue in London that celebrates Wellington’s victory over Napoleon at Waterloo: 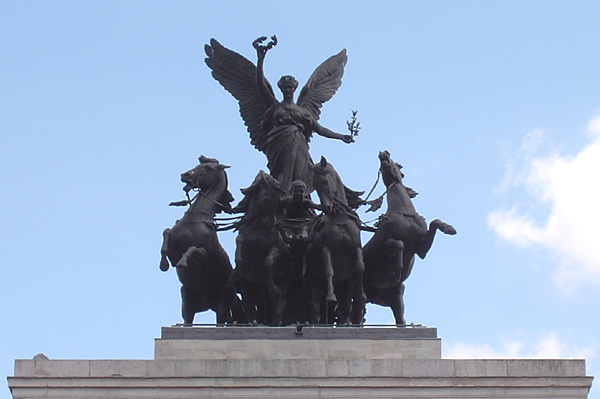 In light of all this, I do believe I’ll just wear white – although even that could be misinterpreted, I guess. 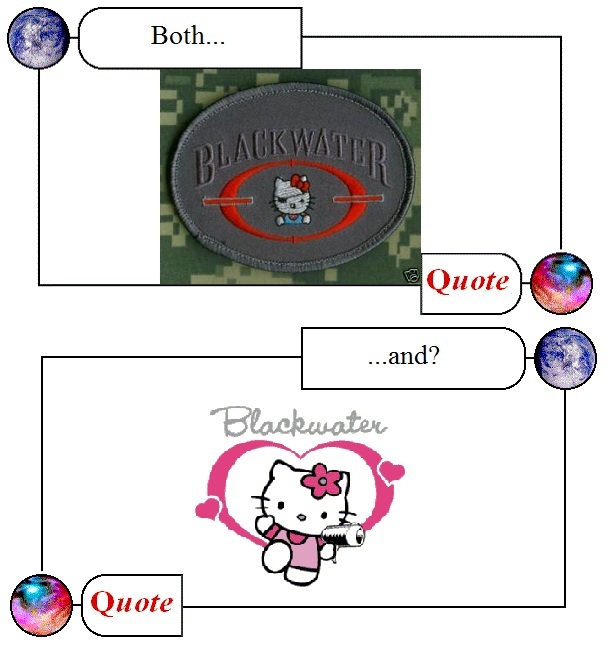 This DoubleQuote was prompted by Spencer Ackerman, writing on Danger Room today: Will Blackwater Go Vegan After Sale to Hippy Firm?