National Review has now gone off the deep end on Donald Trump.

This strikes me as fear and panic but about what ?

But he is not deserving of conservative support in the caucuses and primaries. Trump is a philosophically unmoored political opportunist who would trash the broad conservative ideological consensus within the GOP in favor of a free-floating populism with strong-man overtones.

Cue pearl clutching. What exactly has “the broad conservative ideological consensus” achieved the past 20 years ? Personally, I think Reagan began the problem by choosing Bush for his VP. Bush was antithesis to Reagan’s message and had ridiculed his economic plans.

Sam Houston State University historian, writing on the Forbes web site, has a very odd blog post this morning. He criticizes MIT economist Simon Johnson for attributing the term “voodoo economics” to George H.W. Bush. Domitrovic calls it a “myth” that the elder Bush ever uttered those words. “You’d think there’d be a scrap of evidence dating from 1980 in support of this claim. In fact there is none,” he says.

Perhaps down in Texas they don’t have access to the Los Angeles Times. If one goes to the April 14, 1980 issue and turns to page 20, one will find an articled by Times staff reporter Robert Shogan, entitled, “Bush Ends His Waiting Game, Attacks Reagan.” Following is the 4th paragraph from that news report:

“He [Bush] signaled the shift [in strategy] in a speech here [in Pittsburgh] last week when he charged that Reagan had made ‘a list of phony promises’ on defense, energy and economic policy. And he labeled Reagan’s tax cut proposal ‘voodoo economic policy’ and ‘economic madness.'”

It’s amusing to see people try to deny facts. Some argue that Bush did not oppose “Supply side” theory. Still, that is what “Voodoo Economic Policy” referred to. What else ?

Bush promised “no new taxes” in 1988 but then raised taxes in 1990 creating or deepening a recession that cost him re-electiion and gave us Bill Clinton.

Bush’s proposed budget relied on figures that many consider unrealistic, especially given that a recession was on the immediate horizon. Although the Gramm-Rudman-Hollings legislation threatened unpopular across the board spending cuts if revenues were not raised, President Bush threatened a veto of any increased taxes, pushing instead for cuts in capitals gains taxes. However, with looming economic troubles, in the summer of 1990 Bush agreed to a no-precondition summit in order to avoid an automatic GRH cut of $100 billion. During the summit, which excluded both liberal Democrats and conservative Republicans, Bush agreed that tax increases were necessary. The shift in policy split the Republican Party and gave Democrats cover to raise taxes.

There are arguments that the tax increases increased revenue but the point is that the Cold War was over and spending cuts should have been the Republican goal. Of course, Saddam Hussein invaded Kuwait in August 1990, and budget priorities went out the window. I have also wondered if there was a deal, implied or explicit, that the Democrats required a tax increase to support the president on the Iraqi invasion. Bush held firm until October 1990, three months after the invasion.

Anyway,the response to Saddam was largely predicated on world dependence on Saudi oil and the assumption was that Saddam, unless stopped, would go on into Saudi Arabia. That would give him a majority of world oil production.

In 1992, the Democrats assumed Bush was unbeatable after the Gulf War I and potential candidates like Mario Cuomo stayed out and left the field to a little known governor from Arkansas. American politics have not been the same.

Bill Clinton famously put his wife Hillary in charge of a plan to reform American healthcare and she failed so spectacularly that the 1994 election saw a political revolution. Why ?

the President’s performance can be criticized on several grounds. First of all, one can argue that he attempted to do too much, too soon in view of his weak popular mandate (43 percent of the popular vote in 1992). Perhaps it would have been better to seek reform in steps, starting with such popular items as covering children and providing portability of health care benefits. In this way, he could have broken a huge subject down into manageable pieces that could be understood by the American people in the course of a public debate that might have taken several years.

Another criticism involves the President’s use of a task force, headed by his wife, that operated in secret. This process tended to shut out voices that might have helped create a more viable plan–voices of knowledgeable persons in the Administration who feared to criticize the work of the First Lady, voices of critics of a managed competition approach who were excluded from the Task Force, voices of interest groups and politicians (who were consulted, but not much) who might have exposed the political vulnerabilities of the eventual plan. Secret deliberations and exclusion of contrary voices are probably not a viable way of crafting a major reform in an environment in which the President has limited influence over Congress, powerful opponents, and a public distrustful of government and its capabilities.

The Republican sweep of the 1994 elections devastated the president and his allies. It saw the first GOP majority in both Houses of Congress in many years.

This atmosphere contributed to the narrow passage of the fiscal year 1994 budget, which despite being stripped of major stimulus and public investment programs garnered no Republican support and was opposed by a number of Democrats, as well as the administration’s failed efforts to reform the American health care system. Adding to these difficulties was the slow recovery from the 1990-91 recession. Although U.S. GDP had begun to rise by the time Clinton was sworn in, unemployment remained high, and inequality continued to grow. Popular discontent with the state of the nation’s economy fed into Republican attacks on the social and cultural aspects of American liberalism, the “culture war.”

In spite of huge majorities, and the election of George W Bush in 2000, major domestic issues remained unaddressed. The Republican Congress managed to push through significant welfare reform in spite of Clinton vetoes.

In 1996, after constructing two welfare reform bills that were vetoed by President Clinton,[18] Gingrich and his supporters pushed for the passage of the Personal Responsibility and Work Opportunity Reconciliation Act (PRWORA), a bill aimed at substantially reconstructing the welfare system. Introduced by Rep. E. Clay Shaw, Jr., the act gave state governments more autonomy over welfare delivery, while also reducing the federal government’s responsibilities.

Clinton finally signed the third bill. After that, the GOP Congress subsided into minor and lobbyist driven initiatives. Very little further progress was made. Gingrich became obsessed with personal matters, including a book deal and eventually resigned his role.

Gingrich had a clear shot at the Speakership and was elected. Shortly after the Contract With America had been voted upon, passed, vetoed, renegotiated, re-voted upon and again passed, budget talks between House Republicans and President Clinton broke down. Gingrich led the override of Clinton’s veto and when government operations expired, the federal government shut down.

The shut down was the moment when initiative passed from the GOP to Clinton. The shutdown might have been effective if the Speaker had persisted but he had made a number of personal matters that distracted.

A continuing resolution bill allowed the government to keep running. Nevertheless, the Clinton White House and Republican congressmen failed to reach agreement on the budget, and as a result the expiration of the continuing resolution on November 13, 1995 led to the closing of all non-essential government services. The shutdown lasted until November 19, when the President and Congress agreed to try to balance the budget in seven years. There was little agreement about how exactly this would be accomplished, however, and negotiations over the budget quickly dissolved. When the new continuing resolution that had been agreed to in November expired on December 15, the government shut down again. Over the following twenty-two days White House and Congressional negotiators struggled to hammer out an agreement over the budget, with the end result that, by January 1996 the President and Congress agreed to a seven year balanced budget plan that included modest spending cuts and tax increases.

Politically speaking, President Clinton got the better of the 1995-96 government shutdown. Whereas Gingrich expected the public to side with the Republican Party during the dispute, opinion polls showed that a majority of Americans felt that the impasse had been the result of Republican obstinacy.

A lot of this resulted from Gingrich’s behavior and allegations of personal animus about trivia. One major example is illustrated by this cartoon. 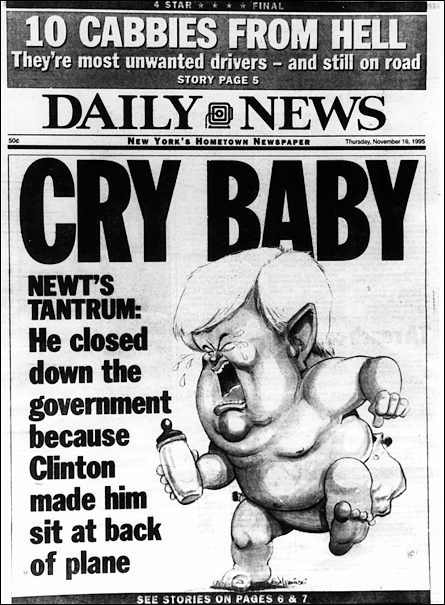 It followed a complaint by Gingrich that he had been seated in the rear of Air Force One. A rather silly complaint but one that cost the Republicans much moral high ground.

Eventually, he was forced to resign and Dennis Hastert, a corrupt Illinois politician, replaced him. The conservative revolution was over.

Now, we come to the National Review complaints about Trump.

Trump’s political opinions have wobbled all over the lot. The real-estate mogul and reality-TV star has supported abortion, gun control, single-payer health care à la Canada, and punitive taxes on the wealthy. (He and Bernie Sanders have shared more than funky outer-borough accents.) Since declaring his candidacy he has taken a more conservative line, yet there are great gaping holes in it.

There is a useful summary of the complaints at the web site Vox.

I am not impressed with National Review as a source of conservative orthodoxy since they have joined the Social Justice Warriors the past two years. First, they fired columnist John Derbyshire for this article which was not even published at NR. The Editor in chief Rich Lowry declared that “His latest provocation, in a webzine, lurches from the politically incorrect to the nasty and indefensible.”

I disagreed and NR dropped off my radar although my subscription still seems to run. Lately, they also seem to have dropped writer Mark Steyn. It is possible that Steyn dropped them and he is just the guy to do it.

sample quote: “I am sorry my editor at NR does not grasp the stakes. Indeed, he seems inclined to ‘normalize’ what GLAAD is doing. But, if he truly finds my ‘derogatory language’ offensive, I’d rather he just indefinitely suspend me than twist himself into a soggy pretzel of ambivalent inertia trying to avoid the central point – that a society where lives are ruined over an aside because some identity-group don decides it must be so is ugly and profoundly illiberal.”

Anyway, I am not really a Trump fan but I understand where he is coming from and why he is here. That seems to be more than NR does.