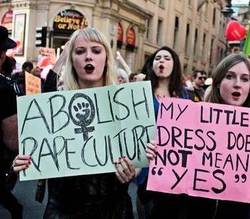 The college scene is all agog about rape culture. How do we know if it is a problem ?

It’s a phrase you hear a lot. But, what exactly does it mean? Is there one general definition? Not necessarily. In many ways the phrase evokes the famous Supreme Court comment about obscenity from Potter Stewart, “I know it when I see it.”

And, you don’t have to look far to see examples of rape culture these days. Whether it’s advertising, movies, music videos or social media — images, words, concepts — it’s all out there illustrating men dominating women.

So, now we know the problem. It is men.

Popular movies are strewn with plots of men with the sole purpose of having sex. In the movie “American Pie,” the entire plot of the film revolves around teenage boys wanting to throw a party so they can get girls drunk and have sex with them.

It’s also been stated by writer Adam Herz that the title also refers to the quest of losing your virginity in high school, which is as “American as apple pie.” So, it wasn’t just about girls losing virginity ?

An early sign of an obsession with “rape culture” on campus occurred at Duke during the lacrosse case. In April 2006, in a 2000-plus word statement that declined to mention the presumption of innocence, Duke president Richard Brodhead created a “Campus Culture Initiative,” to explicate and “confirm [emphasis added] the existence of a dominant culture among Duke undergraduates.” There was, of course, no rape, but the CCI proceeded along as if there were, operating under the Orwellian slogan that “diversity makes a more excellent university.”

The Duke LaCrosse team case is a horrible example of leftist agitation in action. The whole story is here. Briefly, a hysteria descended on the Duke University campus after a stripper, later convicted of murder, accused the La Crosse team of a gang rape. The young men of the team were immediate demonized by the usual suspects of campus radicals. Fortunately, the boys came from families that could afford good lawyers.

A “proper education” changes with its times.

In the days of America’s founding a true education was a classical education. An educated man was not simply expected to be familiar with the great works of Greek and Roman civilization; the study of these works was the foundation of education itself. Thomas Jefferson’s advice to an aspiring nephew captures the attitudes of his era:

It is time for you now to begin to be choice in your reading; to begin to pursue a regular course in it; and not to suffer yourself to be turned to the right or left by reading any thing out of that course. I have long ago digested a plan for you, suited to the circumstances in which you will be placed. This I will detail to you, from time to time, as you advance. For the present, I advise you to begin a course of antient history, reading every thing in the original and not in translations. First read Goldsmith’s history of Greece. This will give you a digested view of that field. Then take up antient history in the detail, reading the following books, in the following order: Herodotus, Thucydides, Xenophontis Hellenica, Xenophontis Anabasis, Arrian, Quintus Curtius, Diodorus Siculus, Justin. This shall form the first stage of your historical reading, and is all I need mention to you now. The next, will be of Roman history (*). From that, we will come down to modern history. In Greek and Latin poetry, you have read or will read at school, Virgil, Terence, Horace, Anacreon, Theocritus, Homer, Euripides, Sophocles. Read also Milton’s Paradise Lost, Shakspeare, Ossian, Pope’s and Swift’s works, in order to form your style in your own language. In morality, read Epictetus, Xenophontis Memorabilia, Plato’s Socratic dialogues, Cicero’s philosophies, Antoninus, and Seneca….

Though medical education is not inexpensive, academic leaders often ignore the fact that the funds to support it properly are already available, if they choose to use the funds for this purpose. Student tuition, appropriations from state legislature to public schools, and certain portions of endowment income have always been intended for the education of medical students. Traditionally, deans have appropriated these funds for purposes not directly related to education – an animal care facility here, the establishment of a new research program there. Academic leaders bemoan the lack of funds to support faculty teaching time, even as they spend tens of millions of dollars to build new “teaching and learning centers” or expand the administrative bureaucracy.

I thought of the above when reading the following at Instapundit:

The real problem is that higher education isn’t providing enough of a benefit to its graduates, not that universities aren’t extracting enough money from the students. But read the whole thing. Including this: “And, of course, while professors are expensive, they’re not the main expense. Administrators outnumber faculty at most universities these days. But I suspect that won’t get the scrutiny it deserves.” Speaking of cost centers. Much more on administrative bloat, here.

None of this is exactly new knowledge. The response, however, has been as slow as, well, bureaucratic molasses.

Update: Thanks for the link, Professor Reynolds!