The Biden evacuation was botched. We all agree on that but what happened and why ? The Afghans who were interpreters and who worked with the US military were given, or were supposed to be given, special visas. These were called “Special Immigrant Visas” and were for Afghans who worked with the US. We are now reading that The majority of these people were not evacuated.

WASHINGTON—The U.S. estimates it left behind the majority of Afghan interpreters and others who applied for visas to flee Afghanistan, a senior State Department official said on Wednesday, despite frantic efforts to evacuate those at risk of Taliban retribution.

In the early days of the evacuation effort, thousands of Afghans crowded Kabul’s airport seeking a way to flee the country. Some made it through without paperwork, while American citizens and visa applicants were unable to enter and board flights out.

The U.S. still doesn’t have reliable data on who was evacuated, nor for what type of visas they may qualify, the official said, but initial assessments suggested most visa applicants didn’t make it through the crush at the airport.

The Biden administration now boasts that 120,000 Afghans were evacuated. Who are they?

The career field in which I served for twenty years was a small one, and one with some inherent peculiarities, one of which was possession at radio detachments of a library of pop music intended for broadcast on AFRTS channels. One of those things which was instilled in broadcast field recruits early on in our training was that no one of any higher rank (or degree of inebriation, often the case) was permitted to remove recordings from our library for personal amusement. Many were the tales of duty E-2s or E-3s refusing such orders from senior officers, who were operating under the (often alcohol-inspired) delusion that the AFRS library operated on the same basis as the local base library. This often happened late at night when the most junior staffers were on duty. That was an order that we had to and would refuse, no matter the rank, and degree of inebriation of the commander demanding it. In that, we could count on the complete backing of our broadcast command, especially when they were informed of it, sometime the following morning. No one, not even (according to some legends, the base or wing commander) was allowed access to the AFRTS library, much less to remove elements of it from the custody of the AFRTS outlet, even if that only custodian was a lowly first-hitch enlisted. 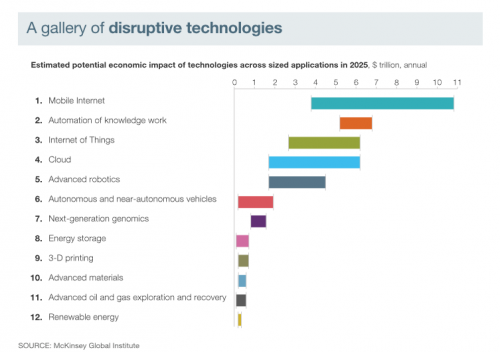 Two reports from McKinsey are helpful in thinking about our 2040 scenario.

I have only looked at the — 30 page — executive summaries.

Disruptive technologies: Advances that will transform life, business, and the global economy

Disruptive technologies: Advances that will transform life, business, and the global economy

These McKinsey pieces were cited in a post on the US Chamber of Commerce Foundation site, which cited to our piece in The American, published by AEI. Thanks to Michael Hendrix for the post.

There is a good piece from CATO on a theme in our book:

The Income Tax: A Century Is Enough.

Also, I respond to a despairing blogger: building America 3.0 is up to us.

Last but not least, some discussion of America 3.0 from HBD*Chick.

Now, I also think it’s important to take a little historical review. If you go on YouTube, you can see Sirajuddin Haqqani with President Reagan at the White House, because during the war against the Soviets in Afghanistan, the United States Government, through the CIA, funded jihadis, funded groups like the Haqqanis to cross the border or to, within Afghanistan, be part of the fight to drive the Soviets out and bring down the Soviet Union.

Uh huh. Well they “see it” wrong and you very well know that, Madam Secretary. Zia directed the monies and toward the end, we attempted to work around the Pakistanis. You know the history. And you’ve seen the intelligence. Didn’t your own State Department sign off on the certification for Kerry-Lugar-Berman after the bin Laden raid? What’s worse? Supporting an insurgency during the Cold War when officials couldn’t see into the future with a crystal ball, or signing off on an aid package after this?

This New York Times report on the murder of a US soldier on May 14, 2007 by Pakistani troops in Teri Mangal is an absolute must read if you are interested in understanding the frustration and contempt for Pakistan that exists among those who have been warning of that nation’s duplicity and complicity in the murder of US, NATO, and Afghan troops.

Let’s review some more, shall we?

Q: The former director of the CIA, Robert Gates, stated in his memoirs [“From the Shadows”], that American intelligence services began to aid the Mujahadeen in Afghanistan 6 months before the Soviet intervention. In this period you were the national security adviser to President Carter. You therefore played a role in this affair. Is that correct?

Brzezinski: Yes. According to the official version of history, CIA aid to the Mujahadeen began during 1980, that is to say, after the Soviet army invaded Afghanistan, 24 Dec 1979. But the reality, secretly guarded until now, is completely otherwise: Indeed, it was July 3, 1979 that President Carter signed the first directive for secret aid to the opponents of the pro-Soviet regime in Kabul. And that very day, I wrote a note to the president in which I explained to him that in my opinion this aid was going to induce a Soviet military intervention.

Q: Despite this risk, you were an advocate of this covert action. But perhaps you yourself desired this Soviet entry into war and looked to provoke it?

Brzezinski: It isn’t quite that. We didn’t push the Russians to intervene, but we knowingly increased the probability that they would.

In order to have a relationship with Pakistan during the Cold War – and subsequently the War on Terror – various American officials and institutions had to, er, well, invest themselves in particular narratives. Nice to see Secretary Clinton continuing the tradition:

Back in January 2009, Secretary Clinton vowed to make development once again one of the pillars of America’s engagement as she said it would be an “equal partner” with diplomacy and defense. The so-called “3-Ds” would need AID to be “strengthened”, “adequately funded”, and ultimately given leadership after a decade of neglect and intentional weakening under the previous Secretary.

I don’t know what to think anymore. (I originally had something harsher here and then deleted it. I remain flabbergasted at her comments. Particularly given the history of the Clinton Administration during the ’90s. Everyone got it wrong on this one. Darn near everyone. The Americans weren’t the only ones to get it wrong, either. The Pakistanis were the main supporters of the jihadists – and for their own purposes. It’s simply not true that the Generals and others were passive observers. Neither were any of the neighbors. Everyone’s always “played” in that neighborhood. The poor Afghans. The poor mothers and fathers of young people in Afghanistan just learning how far the foreign policy establishment in Washington is willing to go in order to preserve cherished ideological myths – and self-importance or institutional funding, a skeptic might say.)

“Words in paper, words in books
Words on TV, words for crooks
Words of comfort, words of peace
Words to make the fighting cease”

The channel broadcasts in Pashto language from 12 pm to 3 pm in the afternoon and 6 pm to 8 pm in the evening. The programs include jihadi taranay (jihadi motivational songs….

And drones the size of bees, some day

And mobiles crossing the Kush; they play

And Americans can talk endlessly about the importance of democracy, but they never thought to explain to the chiefs why they came back to Afghanistan. They arrived with suitcases full of cash to buy help – but they never told the chiefs that they were there because the way al Qaeda attacked the US on 9/11 meant that many Americans couldn’t find so much as a fingernail of their massacred relatives to bury because the bodies were ground to dust.
.
Not to be able to bury one’s dead or even a piece of one’s dead — knowing THAT would have meant a great deal to the chiefs and those in their tribes. But the Americans never explained, never even cried, never showed emotion. THEY NEVER ACTED HUMAN; they never interacted with the Afghans in ways that are the same for all — not only all humans but all mammalian creatures. In other words, they displayed not a whit of common sense.
.
What do you talk about when you first sit down with a man whose life has been circumscribed by war and who knows nothing about you and your tribe? The answer is you tell me of your battles, I’ll tell you of mine and in this way we establish a commonality of experience.
.
You transform the rug or patch of sand you’re sitting on into the terrain of the battle, and you use sticks and stones or teacups as place markers for the troops to show how the battle was fought. In this way, you demonstrate that the battle is truly in your heart, that it means enough to you that you can bring it alive for another.
.
If you don’t show what’s in your heart, then you haven’t established a basis for developing a mutual understanding, so then there is no way to move off the dime. Only when you’ve demonstrated by your stories of war that your tribe also shed much blood for independence, can you move on to explaining stuff about government. You can explain that you were losing too many of your sons in battle so you devised a type of government that would help defend your freedoms and with less bloodshed. And so on.

– Pundita, “Americans, who are you?

Contra Pundita, I bet this has been done sporadically between some who are working together as NATO attempts to build an Afghan Army – one able to protect its borders and serve as an irritant to transnational groups in the region. Many stories have yet to be told….