A famous request from Adolf Hitler was also the tile of a book about the liberation of Paris in 1944, and might be a question about the riots of this week by the “Yellow Vests”

There is not a single media report about the Yellow Vest demonstrations in Paris and France that I’ve read or watched that has not been slanted by Fake News.

It has (usually) not been deliberate, I gather, and nobody has said anything factually wrong; what is the problem is the fact that (very) important stuff has been omitted.

It is not wrong to say that the demonstrations were caused by the government’s decision to raise gas prices. What is missing is that this is just one of several draconian measures dating back half a year, i.e., ‘tis the proverbial straw that broke the camel’s back.

It requires someone on the scene to describe what has really been happening.

For the past four to five months, the French government has done nothing but double down on bringing more and more gratuitous oppression and more and more unwarranted persecution measures down on the necks the nation’s drivers and motorcycle riders.

In fact, the imposition of ever harsher rules has been going on for the past decade and a half or so — whether the government was on the right or on the left — and that is why the choice of les gilets jaunes (the yellow jackets) by the demonstrators is particularly ironic.

The 2008 law (under the presidency of Nicolas Sarkozy) requiring the presence of high-visibility vests (gilets de haute visibilité) aka security vests (gilets de sécurité) in every vehicle — hardly an unreasonable rule, for sure, as similar ones exist throughout the continent — was just another example of the myriad of evermore-onerous rules for car and motorcycle owners over the past 15 years, and so the government in effect provided the 2018 rebels with their uniforms.

With apologies to all, I can’t resist posting the photos, the ones the Maitre d’ took, of Paris on July 4, 2006. 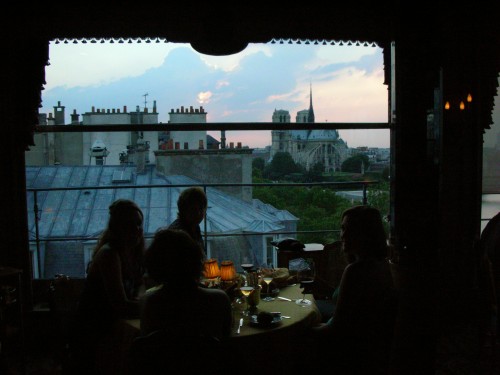 And here is the other 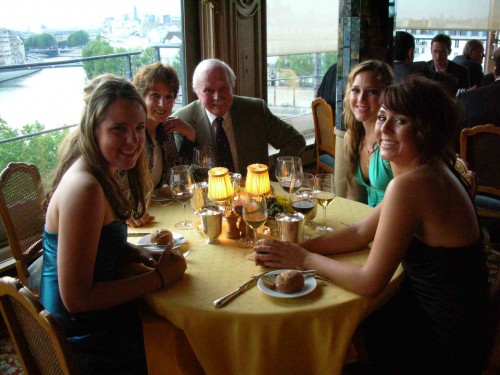 The view was spectacular and so was the food. The waiters were very complimentary to the girls. The one on the right is my youngest daughter; the other two are her cousins. We had two marvelous weeks, beginning in Bordeaux and ending in Paris. She is now working on getting an internship with the French aerospace company her uncle works for.